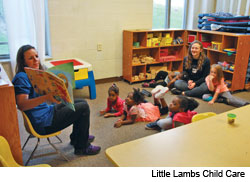 One year after the levy was approved, Preschool Promise is working rapidly to expand access to quality preschool.Mike Boyer About three-dozen 3- and 4-year-olds gather each day at the Little Lambs Child Care preschool in the Seventh Day Adventist Church in Clifton.

Little Lambs has been in operation for 18 years, but Administrator Cheri Phipps says Cincinnati’s Preschool Promise has been a godsend for some preschool parents.

“It opens up more children who can get funding [for preschool],” she says. “A lot of parents struggle with co-pays or even finding the money to send a child to preschool.”

The levy, which costs the owner of a $100,000 home about $5.35 per week, generates about $48 million annually, $33 million of which is directed to improving K-12 education at Cincinnati Public Schools (CPS).

Superintendent Laura Mitchell says those dollars are being used to support the district’s My Tomorrow workforce readiness initiative among other things.

“It makes sure our students are graduating prepared to either go to college or some other form of schooling, go into the world of work in a job where they can make a decent living or the military.”

The levy is also being used to expand the Vision 2020 program, a five-year effort to bring magnet school-like programming to the district’s neighborhood schools.

Little Lambs, a four star-rated preschool under the state’s Step Up to Quality rating system, has added about eight students as result of the tuition assistance from Preschool Promise, which provides aid for preschoolers whose family income is up to 200 percent of the federal poverty guideline. That’s about $49,000 for a family of four.

Why is preschool important? Research shows preschool is an important prerequisite for later student success, especially among economically disadvantaged students.

“One thing people are still astonished by is that 90 percent of a child’s brain development happens in the first three-to-five years of their life,” says Stephanie Byrd, senior vice president for early learning strategies at United Way and interim director of Preschool Promise.

For example, Holy Family Catholic School, a preschool-through-eighth grade school in East Price Hill, has seen the impact of preschool on its students.

“We’ve been keeping track of our preschoolers as they’ve gone through the years,” says Principal Jennifer O’Brien. “Of the kids that come to school kindergarten ready, the majority have had one to two years of preschool. The kids who enter kindergarten ready have no trouble passing the third grade-reading guarantee the first time it’s administered. They pass with flying colors.”

Preschool Promise has allocated about half its funding for tuition assistance. Through the end of October more than 1,026 students were receiving assistance and enrollement is expected to continue to grow into 2018.

Within Cincinnati Public Schools, 255 3-year-olds and 360 4-year-olds have enrolled in preschools due to Preschool Promise assistance, the district says.

“We’re telling families, if you’re eligible for funding from some other source such as a state childcare subsidy or are eligible for Head Start, we want you to bring that with you so it leaves more for others to be served as well,” Byrd says.

More than 80 preschools across the city are participating, Byrd says.

“About half of those are in Cincinnati public schools, with the balance in community schools, such as parochial schools, Head Start and multi- and single-site community providers,” she says.

“The common denominator is that they have to be highly rated in Ohio’s Step Up to Quality rating systems with three, four or five [the highest] star ratings. “

The program is aiming to add more than 1,000 spots or seats over the next five year.

“We have about 42 percent of that number already qualified, if you will, to have a tuition assistance credit,” she says. “Our goal is to get more programs because we need to get more seats.”

To help fill the gap, Preschool Promise has launched a quality improvement effort with the aid of a collaborative of preschool coaches from programs such as 4C for Children to help willing community preschools achieve at least a three-star rating.

Preschool Promise has budgeted about $2.5 million for the quality improvement effort and is seeking 60 providers to participate.

Through early November, 30 providers have either been approved or are in the process of applying for quality improvement.

For example, Laroy Holloway has operated A-List Kids Childcare and Learning Center out of his home in Westwood for about five years. A certified state child-care provider, Holloway cares for about 15 children ages 9 months to 12 years, but wants to expand to become a star-rated preschool.

“The state says this is what you have to do,” he says. “But they don’t give you a lot of resources on how to get there.”

Preschool Promise has provided a coach from the Cincinnati Early Learning Center to help him with business issues, get the education programs and obtain a certificate in early childhood learning, which takes about a year.

“With Preschool Promise working with me, I feel I’ll get everything a lot faster and without hitting a lot of speed bumps,” he says.

In five years when the levy is up for renewal, Byrd says the program expects to have data showing improved kindergarten readiness of several groups of preschoolers in the program and at least one group through the third grade.

“Our hope is that we will have convinced the community it’s a worthwhile investment and be able to go back and renew [the levy],” she says.

In the meantime, Byrd says the program has to build more awareness in the community.

“We’re just covering the tip of the iceberg of what’s really needed to make Preschool Promise a household name so that everybody who is eligible knows what it is, knows how to access it and are taking advantage of it.

“We have a long way to go to make that happen.”