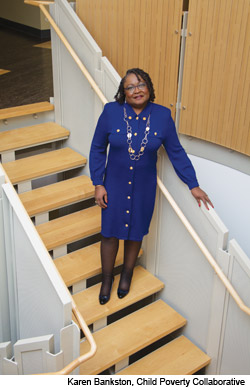 Karen Bankston, an educator, administrator and registered nurse who grew up in poverty in her native Youngstown, in December took over as executive director of Cincinnati’s Child Poverty Collaborative, a community-wide effort that grew out of Mayor John Cranley’s call two years ago to lift 5,000 families and 10,000 children in Cincinnati from poverty.

Bankston, who succeeds Lynn Marmer as the Collaborative’s executive director, is under no illusions.

“It’s a very aspirational goal because of the complexities of this whole notion of poverty. It has so many tentacles and there is no magic bullet. It’s going to require the community, all of us, to change the narrative of how we talk about the work we do. And it’s going to change how we all think and do what we do.”

Despite having one of the Midwest’s fastest growing economies, Cincinnati’s child poverty rate is among the highest in the nation and hasn’t shown much improvement despite public and private efforts to lift people out of poverty.

“Every large community in the country has a challenge with the percentage of their children, families and individuals in poverty and most are working on the issue in some way with new efforts to bring their [poverty] numbers down,” says Robert C. Reifsnyder, president and CEO of the United Way of Greater Cincinnati.

In December the United Way announced it was taking a more family-centered approach to dealing with poverty with the goal that it will lift 10,000 families across its 10-county region out of poverty by 2021.

About half of all children in the city of Cincinnati live below the federal poverty level. The federal government’s poverty threshold is about $24,600 for a family of four. The U.S. Census Bureau’s most recent five-year American Community Survey estimates the number of children in the city of Cincinnati living in poverty at 44.6 percent, or about 28,811. That’s down from just over 30,000 two years ago.

The United Way of Greater Cincinnati says more than 100,000 families, one out of four in its 10-county region, struggle to meet basic needs.

But it’s poverty, not just child poverty, that’s the focus.

That idea that the poor aren’t working is the first hurdle to overcome.

“Let’s be clear. We’re talking about people who work every day,” says Bankston.

United Way says more than 60 percent of the children in poverty in the region have at least one working parent and that nearly three out of every four jobs in the region pay less than about $50,000, the amount the federal government says is necessary to support a family of four.

Dave Phillips, co-founder with his wife Liane of the nonprofit Cincinnati Works, has been battling Cincinnati’s poverty problem for more than 20 years. Cincinnati Works, which is part of the Child Poverty Collaborative, teams with agencies and employers to help individuals not just find jobs but focuses on job retention and advancement through the use of coaches who help them overcome barriers to self-sufficiency.

Phillips, recognized in 2011 by the Cincinnati USA Regional Chamber as a “Great Living Cincinnatian” for his community work, says most of the efforts aimed at dealing with poverty have focused on its symptoms rather than its root cause.

“Our human services structure is [built] around [treating] a disease state,” he says. “It’s around providing food, housing vouchers, clothing, legal aid and mental health. Cincinnati has excellent organizations to deal with those specific disease states. But a family in poverty doesn’t have just one of these conditions. They have multiple conditions—barriers—that keep them from going to work and staying at work. It’s really the staying at work that’s the big issue that keeps them in poverty.”

“The challenge is most organizations help people with particular issues they’re facing at the time. They may need a job, or transportation, or legal services or childcare and the agencies have been set up generally to help with those particular issues. Once that issue is dealt with the agency and client move on. What happens is there’s an incident in the family—the person loses a job, or there’s an illness—that causes another problem. And they end up going to another agency to get service. Our system has been episodic in the way it serves individuals and families.”

Both the Child Poverty Collaborative, which works out of the United Way offices, and the United Way itself are taking a more holistic approach like that used by Cincinnati Works in working with those struggling with poverty.

For example, she points to data indicating there are thousands of unfilled jobs among logistics firms in the suburbs. The problem is many poor inner city residents don’t have transportation to get to those jobs, or the bus system doesn’t connect with those locations.

The collaborative has convened an Employer Roundtable, which meets quarterly to share information and discuss possible solutions, says Janice Urbanik, executive director of the Partners for a Competitive Workforce, who coordinates the roundtable.

She says higher pay alone isn’t always the biggest factor in retaining entry-level workers. Benefits, such as child-care for single parents, and a path to higher wages, can be just as important.

The collaborative also has begun a one-to-one mentoring program working first on how individual programs and agencies can do a better job of working together and eventually developing individual “coaches” to work with families struggling to achieve self-sufficiency.

As part of its effort the United Way is committing 80 percent of the funds it invests in initiatives and programs to help children and families out of poverty. Reifsnyder says it will focus more attention on tracking how families fare as they move from poverty to self-sufficiency.

“It will require new innovations in the way we work and greater collaboration,” he says. “So if one agency is providing a service such as job training or placement but they don’t offer child care or legal services or transportation, they can partner with another agency that does provide those services.”

Bankston says she’s optimistic based on the response she’s getting.

“But we’ve got to be in this for the long haul. I know people are expecting things will be ‘done’ at a certain point,” she says. “What we’re talking about here is changing the way people think and behave and that will take time.”