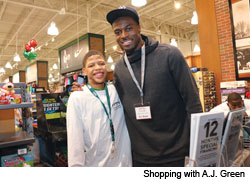 Executive Director Barbara Dundee says that many foundations make monetary gifts to support other charities, but the Marvin Lewis Community Fund raises money to fund its own programs, like Learning is Cool and its scholarship program that grants at least five $20,000 college scholarships per year.

Learning is Cool is a rewards program that reaches 30,000 urban public school kids, encouraging them to make the A-B honor roll at their schools through visits by Cincinnati Bengals players and incentive gifts, including a trip to the Cincinnati Zoo for two-time honor roll students, and a signed letter of congratulations from Marvin Lewis.

While meeting and getting a picture with Coach Lewis at the zoo remains a strong motivator for students, Dundee says just receiving that letter is impactful.

“It’s the idea that someone famous cares about my grades,” Dundee says. “A lot [of children] don’t have that kind of encouragement at home.”

Players and guests visit the schools eight times during the season, each time emphasizing how an education is key to any livelihood the students will pursue, Dundee says.

In the 10 years since Learning is Cool started in grades 1-8 in the Cincinnati Public School District, A-B honor roll students went from fewer than 8,000 students to more than 20,000 students. Dundee credits teacher and school support of the program as part of its success.

Learning is Cool also runs in the Middletown City School District, North College Hill and Covington, where it extends from grades 1 to 12. The program was the brainchild of the fund’s first executive director, Sharon Thomas, who passed away about a year after it began, Dundee says.

This year 7,700 students earned the Cincinnati Zoo private event rewards trip, which 2,300 attended. The Community Fund distributed lanyards with bar codes for the student to wear and admit two guests with them. The plan replaced paper tickets that could be lost, Dundee says.

In early December the Marvin Lewis Community Fund partners with Dick’s Sporting Goods to give students—chosen by the Learning is Cool participating schools—each a $200 gift card in a shopping trip with Bengals players and cheerleaders. Each player has a team of students to help shop for holiday gifts they might not otherwise be able to purchase.

“They’ll buy things for siblings or themselves,” Dundee says, with players sometimes covering for them if they’re short at the checkout line.

Many fundraisers, as well as programs, fittingly tie back to the game of football. An October fundraiser, Football 101, treats hundreds of women to dinner, an open bar, silent auction and an evening of football education at Paul Brown Stadium. The women tour the locker and weight rooms, then even suit up to run some drills on the field.

At the Marvin Lewis Coaching Clinic program for coaches, “we’re trying to promote the proper way to coach and teach football,” Lewis says.

But on a deeper level, the clinic intends to impart on coaches an understanding of their impact on players’ lives, and how they can influence them to be stronger readers, good sports and scholars.