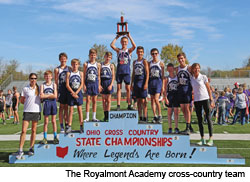 Royalmont Academy students have found success in academics and athletics.Corinne Minard Students at Royalmont Academy have had a winning year. According to Karen Kinross, director of admissions, this can be attributed to the Catholic school’s four pillars: intellectual, spiritual, human and apostolic.

“They’re not just learning academically, they’re not just athletic, they’re all of these things together so that they’re well-rounded,” she says. “We are forming Christian leaders, that’s one of our mottos.”

The preschool-through-12th grade school currently has 164 students in its Mason location. That small size, though, has allowed the school to give its students plenty of personalized attention—it has a student-to-teacher ratio of 5:1.

That attention has enabled students like senior Matthew Conner to succeed. Conner is the school’s first National Merit Scholarship semi-finalist. He says Roylamont classes like Latin and logic helped him to do well on the test, but it’s the other things the school offers that Conner appreciates the most.

“The other school I went to was a good fit academically, but that was pretty much it. My faith is something that means a lot to me and I felt like Royalmont had an environment that was going to be much more nurturing of that than my previous school,” he says. Conner—who plays on the school’s basketball and cross-country teams, participates in the liturgies at school and volunteers at his church—says Royalmont has been great at helping him balance his coursework (which includes two college classes) with these extracurriculars. It was also a tremendous help with the scholarship application.

“They’ve been very easy to work with. And willing to cooperate to make sure that we get things in on time because, especially with National Merit, that was a hard deadline and that was a fast deadline. You had I think two or three weeks to get everything in,” he says.

Another student who has had a winning year is eighth-grader Alex DeRoussel. A cross-country runner he placed first at state in his 2-mile race in Division III. The team itself placed second in the state in Division III.

“What I liked about it is how we are all so close together. That’s one of the advantages of having a smaller team. The night before state we all went out for dinner and it was just like really team bonding and we all look out for each other,” says DeRoussel.

He started running with Royalmont six years ago and attributes that closeness, along with the virtues taught at the school, to the team’s success. “I think that most of the virtues they teach us here like perseverance, obedience [and] respect apply to life and not just running,” he says.

Both DeRoussel and Conner say that the student body’s support has made their successes even sweeter. A large pep rally was held for the cross-country team the week before the race and Conner has found the school to be supportive as well.

“I think that both boys have such a foundation and support. Their faith formation has allowed them to take that into other arenas, whether that is academic or athletic, [and] they’re really using that as part of their foundation to build greater things,” says Kinross.