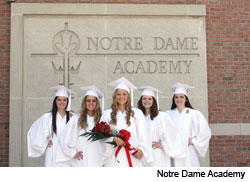 Notre Dame Academy is raising funds to get its school ready for the education of the future. Corinne Minard According to Jane Kleier, director of marketing and communications for Notre Dame Academy, the Sisters of Notre Dame has never been about keeping up with the times—it’s about staying ahead.

“They have always been pushing the school forward to take that next step, not necessarily because now’s the time, because it’s before the time typically for Notre Dame Academy,” she says.

With that in mind, the school is currently in the midst of a $7 million capital campaign that promises to bring the school into the 21st century thanks to an innovative and forward-thinking renovation.

While the school has been continually updating its building since it moved into it in the early 1960s—most recently with the addition of a performing arts center, sports facility and tennis courts—the new renovation promises to assist students in the ways they learn, worship and socialize.

The first of the renovation’s four projects is the school’s chapel. The chapel is being expanded and will also include a new cross. “The new chapel will hold up to 180 people and allow for entire classes to gather for mass and prayer services. It includes a reflection space for individual and small group prayer and reflection. It will have a separate entrance and outdoor garden feature,” says Principal Laura Koehl.

Renovating the chapel reflects the school’s continued dedication to the spiritual aspects of its education and will give the students more opportunities to embrace it.

“Having a special place where students can go for quiet reflection or to pray and honor God is increasingly important in this technological age,” says Koehl.

The second project is the school’s 21st century Collaborative Learning Center. “NDA’s 21st century Collaborative Learning Center will support the new and innovative ways that NDA students utilize a library to access online resources and collaborate with others to problem-solve and create new ideas,” says Koehl. It will feature learning booths with an interactive wall monitor in each, moveable furniture ideal for group work, a seminar room, and recording and sound rooms.

In addition, the center will have plenty of places to plug in an iPad; the school has a 1:1 iPad program and the school is looking for new ways to make this easier for students.

Another piece of the renovation is the creation of a food court and student commons. “The goal for NDA’s new food court and student commons is to create a space that will serve as a home away from home for students. It will provide an environment that is conducive to quiet study time and accommodate small or large group events as well as the entire NDA student body for assemblies and presentations,” says Koehl.

Kleier says the space will be more similar to a college campus than a typical high school cafeteria.

The last project will increase the accessibility of the campus. “A second elevator in NDA’s school building will provide equal access for all,” says Koehl. “Half floor areas will be renovated into classroom spaces that will be fully accessible to provide equal access.”

Together, these projects will bring the school into the 21st century and prepare students for college and beyond.

The school was at 96 percent of its goal in early November and expects to reach its goal by the end of the year.

So far, the renovations that have been completed are a new bathroom on the first floor, the outfitting of four classrooms with new furniture and the completion of the counselors’ office suite. However, the students are already excited about the changes that have happened and that are to come.

“They love the new spaces and new furniture. The desks are very flexible and comfortable and they appreciate the comfort and flexibility they afford,” says Koehl. “The first floor hallway also has two of the new incidental learning spaces that allow for a place to sit quietly and study as well as charge their devices. These spaces are filled constantly! They are excited to see the other new changes and ask about them often.”

While the renovations are bringing changes to Notre Dame Academy, Koehl says these changes are reflecting what the school has always been.

“For 112 years NDA has been educating young women to make a difference in the world. The Sisters of Notre Dame founded our school with a specific vision and mission and as the times have changed they have constantly responded to the current realities and future opportunities. We want to continue the vision and innovation that is the hallmark of the Sisters of Notre Dame in providing an excellent Catholic education for young women,” she says.