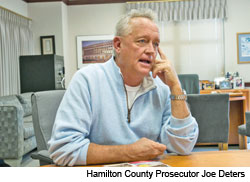 Joe Deters reflects on his more than 30-year career while looking to the future.
Peter Bronson
Anyone looking for evidence of criminal activity in the Hamilton County prosecutor’s office will be disappointed.

There are no “Death Penalty in Brutal Slaying” headlines on the walls. No framed perp-walk photos of killers in handcuffs. No bloodstained hammer used as a paperweight. Thousands of crimes have left no fingerprints on the large, sunlit office of Joseph T. Deters.

All those clippings, courtroom exhibits and souvenirs from headline cases are tucked away in a small windowless room. The only thing to connect the man in the powder-blue sweater to the cold machinery of justice is a cartoon from the Cincinnati Enquirer.

It shows little Marcus Feisel in the clouds, holding hands with St. Peter. “Let’s don’t watch the trial, Marcus,” the saint says. “You’ve been through enough.”

Marcus, 3, was bound in a blanket with packing tape and left to die in a stifling dark closet with no food or water by his foster parents, Liz and David Carroll. Deters helped put the Carrolls in prison in 2007, working with Clermont County, where the incinerated body of Marcus was found.

“That was the first press conference I ever had where the reporters cried,” Deters recalls. He lists it among his most memorable cases. But there are so many.

He has prosecuted high crimes and misdemeanors in Cincinnati since 1982 when he started fresh from law school as an assistant prosecutor. He was elected clerk of courts in 1988, then appointed prosecutor in 1992. Except for a detour as Ohio state treasurer (1998-2005), the prosecutor’s office has been his for the asking, including a write-in win in 2004 and every election since.

Asked what he would like to be doing in 2020, he dismisses the case for retirement: “I would love to be prosecutor.”

The late federal judge Carl Rubin—a former prosecutor—once told him, “Being the prosecuting attorney in a metropolitan city is the best job in government, and it’s not even close.”

His office is in the middle of all that matters. Crime. Scandal. Politics. Finances. Media. The courts. If it’s news, Deters knows the story behind the story.

But has Joe “TNT” Deters gone soft? Last summer, the Cincinnati Police union voted “no confidence” over his prosecution of University of Cincinnati policeman Ray Tensing for the shooting death of Sam DuBose. Even friends scolded Deters.

“Tensing was a tough one,” he says. “I have cleared more than a hundred cops since I’ve been prosecutor. But as soon as I saw this one, I said, ‘Holy crap. We’ve got a bad shooting.’” After a mistrial and a hung jury, Deters dropped the prosecution. But he insists, “Some people should not be cops, just like some people shouldn’t be prosecutors or reporters.

“I haven’t gone soft,” he laughs. “But my perspective on being prosecutor changed when I was treasurer and saw what abuse of prosecution does to innocent people.”

In 2002, Deters was the target of a 14-month grand jury investigation of campaign finance by Cuyahoga County. He called it despicable and political. Two former staffers pleaded guilty to misdemeanors. Deters was exonerated. But it ended his plan to run for attorney general and beyond. He came home jaded but wiser.

“On lower level cases, I understand now how people could make mistakes. I’m not the hard-ass I used to be. But still, some criminals are un-savable. With some violent criminals, I don’t care if they get a college degree or whatever, they should never get out of jail.”

Critics of that philosophy use statistics.

There are about 50,000 inmates in 27 Ohio prisons. Hamilton County has less than 7 percent of the state population, but almost 10 percent of the inmates.

That sounds like an argument for a kinder, gentler approach—until the prison time is matched to the crime: rape, sexual battery, aggravated arson, aggravated vehicle assault, manslaughter, kidnapping, murder…

Hamilton County has 24 inmates on death row—leading Ohio and in the top 20 nationally for death sentences. Deters put most of them there and he sleeps fine. His team doesn’t use executions as a threat to extract lesser pleas. They only seek death when they are 100 percent sure, he says.

“This is self defense,” he argues. “Anthony Kirkland killed five girls. If some judge or governor lets him out in 20 years, he will kill again.”

Among others, Kirkland kidnapped, assaulted and murdered Esme Kenney, 13, a pretty and talented girl who went for a jog near her Cincinnati home in 2009. But his death penalty was overturned.

Taxes may be certain. Death penalties are not. So Deters handled the Kirkland re-sentencing himself. “I’m getting pickier,” he says of courtroom work. “I gravitate toward cases involving kids.”

If he did have a trophy case, it might feature serial killer Joseph Paul Franklin, whose unknown number of shooting victims in the 1970s and 80s included pornographer Larry Flynt and politician Vernon Jordan, who both lived, and two teen boys in Cincinnati who did not. Deters remembers how Franklin canceled an interview for Hitler’s birthday, then confessed to assistant Melissa Powers, who is now a judge. “I brought in the boys’ moms and told them, ‘We finally know who killed your boys.’”

A crime shrine might include Rayshawn Johnson, now serving life after his death penalty was overturned for the 1997 murder of neighbor Shanon Marks.

Jeffrey Wogenstahl would be there for the abduction, attempted rape and murder of 10-year-old Amber Garrett in 1991. “That was a horrible case. Just horrible,” Deters says. He remembers the evidence, the witness who saw Wogenstahl power washing his car seats, the one-in-50 billion match to her blood. Wogenstahl is still appealing his death sentence, 25 years later.

The prosecutor’s office is as clean as a bank, but the cases that come through it track darkness and leave shadows of sadness. His former boss, longtime prosecutor and sheriff Si Leis, told Deters, “This is a young man’s job. Things roll off your back. It’s easier when you’re young.”

Deters could become a judge, or go full time into private practice. But he remembers his grandfather, Dan Tehan, who was sheriff of Hamilton County for 24 years. “He never wore a uniform, never carried a gun,” Deters says, glancing at a picture of the sheriff surrounded by family, including a smiling little boy who would become prosecutor.

“He was sheriff for 24 years and an NFL official for 34 years. Grandpa was a legendary person. Very popular, very funny. He was the only Democrat in the county who could win. He used to joke that even Grandma voted against him.

“He told me that there is no better calling than public service.”

Deters, now 60, seems at ease with himself and where he is. He doesn’t need headlines on the walls. He knows what he has done. “The prosecutor sets the tone for law enforcement.”

And Cincinnati’s tone is right in tune with voters.