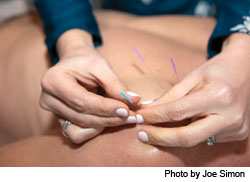 Now, nearly 20 years later, the practice, which blends conventional medicine and alternative therapies, is not only thriving, it’s among the busiest of its kind in the country. The Amoils are readying to release a new edition of their book, Get Well & Stay Well, a leading guide for their brand of transformational medicine. And Alliance is celebrating a new accreditation that ranks it among the likes of George Washington University, the University of Michigan and more.

“We really never thought we would survive ourselves, but the fact we’re still around is really a testament to the wonderful results people are getting here,” Steve Amoils says.

And, he says, there’s more to come.

Located on East Galbraith Road in Kenwood, Alliance feels more like a spa than medical office. Every design element is for therapeutic effect. Music is instrumental, calm. There’s no waiting room, per say. And patient rooms are fronted by curtains, not doors.

“Everything we do is meant to calm people down, to make them feel better,” Steve Amoils says.

And the practice has seen results. By combining conventional and alternative therapies, patients see improved outcomes, and the Amoils can point to plenty of studies to prove it.

AIM logs about 30,000 patient visits per year; Steve Amoils says it’s “by far” the busiest integrative facility in Cincinnati and is among the most active in the country. The staff, roughly 30 strong, includes medical doctors, chiropractors, a dietitian, naturopathic physician, clinical psychologist, energy healers, massage therapists and even rolfers, who use soft tissue manipulation to improve posture, ease chronic pain or reduce stress.

The idea is to treat the whole patient. A comprehensive evaluation looks at sleep, lifestyle, diet, pain or stress, and medications. Most people seek treatment here because traditional medicine has failed them somehow, particularly when it comes to “functional issues” like chronic pain, migraines, irritable bowel syndrome, fibromyalgia, fatigue and more. This, Steve Amoils says, is where the practice shines.

“A lot of times those patients feel like they’ve run out of options,” Sandi Amoils says. “They want more options for care.”

In 2004, the Alliance was named one of the top six centers in the country, and, most recently, received accreditation for its integrative medicine fellowship program by the American Board of Physicians Specialties—one of only 14 schools in the country to be recognized—the only in Ohio.

While the milestone is a “huge national accomplishment,” Steve Amoils says—George Washington University in Washington, D.C., the Institute for Family Health in New York and the University of Michigan are also on the list—future goals for AIM are to provide “outstanding care to patients” and the best possible workplace for employees.

Alliance will celebrate its 20th year in 2019, and the Amoils hope to significantly bolster the Alliance’s Foundation so the practice can last into perpetuity —a challenge for any business, much less a cash-based practice like theirs (AIM does not accept insurance; an initial consultation, for example, cost around $299).

There have been offers to open elsewhere, but the couple, originally from South Africa, says they are home.

“Many [who visit from] other centers have remarked how amazing it is that we’re in Cincinnati,” Steve Amoils says. “But Cincinnati has been wonderful to us, and we want to give back to Cincinnati. We want to be a beacon for this kind of medicine all over the country.”