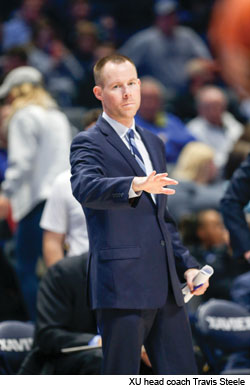 Tristate teams are looking to build on past successes as they head into the 2018-19 season
Scott Unger
Post season upsets derailed successful seasons for the region’s three basketball teams, but a new season brings new expectations, players and, for one, a new coach.

Although the season had yet to tip off during an October afternoon practice at Xavier’s Cintas Center, the energy and enthusiasm of first-year head coach Travis Steele would cause the casual observer to think the Musketeers were getting ready for a national championship game.

A 10-year veteran of the program, Steele takes over for the latest in a line of head coaches who moved on to blue blood programs. Thad Matta led Xavier to the Elite Eight in 2004 before departing for Ohio State, Sean Miller added another Elite Eight appearance in five years before leaving for Arizona and Chris Mack continued the legacy, giving Xavier its first one seed in school history and becoming the program’s all-time leader in wins before taking the Louisville job this season.

“I’ve learned a lot from each of those guys but I’m going to be my own guy. Maybe a little bit louder than even Mack was,” Steele says. “I’m going to be hard on our guys because I expect a lot out of them.”

While he’ll be his own man, Steele recognizes what his predecessors have built in Norwood.

“The culture here is in place as far as guys working hard, winning matters, competing in practice, the culture is there,” he says.

While culture remains, the faces change, as Xavier faced the departure of leading scorers Trevon Bluiett and J.P. Macura and will depend largely on a junior point guard and trio of sophomores gaining experience, including All Big East Honorable Mention Naji Marshall.

“Each of those guys is making big, big jumps,” Steele says. “ I expect a lot out of each of those three on both ends of the floor.”

The undisputed leader will be floor general Quentin Goodin, who Steele predicts will be the leading point guard in assists in the talented Big East and says he expects a lot on the offensive end.

“I think he’ll score more for us, just out of necessity. But he’s got to be able to get other guys wide open shots, too,” Steele says. “He’s got to able to find that fine line, scoring and making guys better.”

The product on the floor will change slightly from what fans are accustomed to under Mack, with a faster pace on offense and a 90 percent reliance on man-to-man defense.

“We’ve always played fast, I think we’ve got to play even faster, though,” he says. “We don’t want to take bad shots. With our personnel not being quite as good of a shooting team as we have in the past, we’ve got to be able to get easier baskets.”

As defending Big East regular season champions, expectations are high in Norwood. While Steele won’t make any guarantees, he’s excited by the team’s progress with the integration of so many new faces. 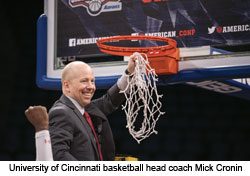 Down the road, Mick Cronin’s Bearcats one-upped Xavier’s accolades—winning the American Athletic Conference regular and tournament championships—but shared its season ending, suffering an upset in their second game of the NCAA tournament.

Last year’s roster has two players currently signed to NBA contracts—Golden State Warriors first-round pick Jacob Evans and Houston Rockets Gary Clark. Gone are 24 points and 13 rebounds per game from the inside duo of Clark and Kyle Washington. This year’s offense will depend heavily on the scoring of last year’s third-leading scorer Jarron Cumberland, the lone bearcat to be named to the AAC preseason first team.

At the Bearcats local media day, Cronin praised the junior’s dedication to the game and passing ability and warned foul trouble is a big concern for him this year as the team’s leader.

“Being an all-around player is not something I have to sell him on—he really knows basketball. I think the most important thing for him is keeping him out of foul trouble early in the games, whereas last year it’s not that big of a deal,” Cronin says.

Returning senior guards Cane Broome and Justin Jenifer will see more looks at the basket this year, but their leadership will be most important, Cronin says.

“[Scoring] I’m not concerned with, that will all take care of itself if they take ownership and [say], ‘We’re going to win or lose this year based on how invested I am as a senior leader.’”

The Cats will look for contributions from newcomers freshman Logan Johnson and junior college transfer Rashawn Fredericks, who Cronin compared to Bearcat great Pete Mickeal for his ability to out-will opponents.

“He’s got an innate toughness and he can make open shots and he’s never going to be a guy that goes back on defense and rests,” he says.

As a freshman guard, Johnson needs to focus on limiting turnovers, but Cronin expects immediate contributions on the offensive end.

“He can create a basket whether it’s for himself or his teammates and he doesn’t need the pick and roll to do it.”

In the absence of Clark and Washington, more will be expected of the Bearcats quartet of big men in Nysier Brooks, Eliel Nsoseme, Mamoudou Diarra and Tre Scott. The group’s rotation, defense and speed should give the team the ability for more fast break points than the notoriously lead-footed Clark.

“Our bigger guys are much faster than Gary and Kyle. Running the floor was not their best attribute but we still tried,” Cronin says. “If you can score in the first eight seconds of the shot clock your field goal percentage is going way up.”

With players routinely moving on to the pro level and eight straight NCAA tournament appearances, the recruits will likely keep coming, but the $87 million renovation of Fifth Third Arena can’t hurt either. 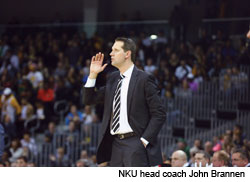 Across the river, John Brannen’s Northern Kentucky University Norse look to continue to build their profile and hope to grab the tournament berth that eluded them last year after winning the Horizon League regular season.

Led by conference preseason player of the year Drew McDonald, the Norse will look to repeat with eight new faces, including five freshmen.

“This year’s team is fast, it’s not as long and athletic on the perimeter but we’re very strong up front. I want our team to be a reflection of our style of play, which is aggressive and disruptive really up and at ya’ for 94 feet,” Brannen says.

Despite the loss of seven players, the Norse were picked to finish second in the conference preseason poll, but Brannen doesn’t put much stock in preseason picks, having won the league three years ago after being projected to finish seventh.

“It’s just prognostication, you never know what’s going to happen once the ball is put out there. I think it speaks more to the winning culture that we’ve gotten this program,” he says.

With all three area teams winning their conference titles but coming up short in postseason goals, expectations are high in the Tristate as the 2018-19 college basketball season gets underway.