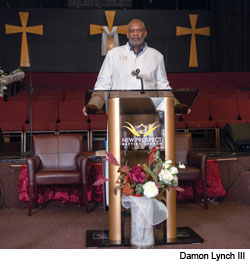 Black leaders are looking to bring change in new ways to Cincinnati
Liz Engel
Damon Lynch III is a self-proclaimed movie buff. It’s common for his sermons—preached from the pulpit at New Prospect Baptist Church in Roselawn—to include some kind of quote from a favorite film.

It’s also common for those Sunday speeches to touch on elements of liberation. It’s hard, the pastor says, to separate that from his theology. Especially in the wake of recent events, specifically the exit of Michael Johnson from the United Way of Greater Cincinnati amid racial tension, which has spurred the creation of a new ad hoc group called BlackLed Change.

Lynch isn’t its leader, he says, but does serve as BlackLed’s defacto spokesman. The issue is top of mind for several other African-American community leaders who are all looking to spark change in a variety of ways.

But unlike Johnson, who complained of “subtle threats and a “hostile work environment” in an email to his board, “They sometimes can’t say it openly,” Lynch says. “They’re still employed or when they leave, they sign [nondisclosure] agreements. But what you hear from the black community is, ‘This is a tough city.’”

A leader, per Lynch’s definition, is a person who’s not afraid to take risks. Someone willing to speak the truth. In many ways, Johnson, who was United Way Cincinnati’s first black CEO in its 103-year history, met that criteria. And, even if using the most basic of definitions—a leader as someone with followers—Lynch, of course, does, too. But the storyline in Cincinnati, it seems, remains unchanged.

Johnson’s story “is not a new one in regards to black leadership in our city,” Lynch says.

“The list just gets a little too long not to notice,” Lynch adds. “Just to hire an African-American, but not give them the power to do the job, becomes window dressing.”

Meanwhile, black communities, too, stand static. In some ways, Lynch says, they’re worse. He points to an Urban League report from 2015 that chronicles “two Cincinnatis,” one black, one white. Of the almost 14,000 families living in poverty, 76 percent are African-American, it says. And people living in low-income, predominantly black neighborhoods have shorter average life spans than residents of affluent, predominantly white communities.

If anything, the Michael Johnson situation “pulled the cover off what many black leaders experience” every day, says Renee Mahaffey Harris. After 10-plus years with The Center for Closing the Health Gap, first as its executive director, then as its chief operating officer, Harris is now seguing into the CEO role at the nonprofit. It’s partly the reason why Cincinnati ranks among the top cities for mortality rates for black people, educational obtainment, and level of evictions. All are issues that The Health Gap is working to address.

“Where you live should not affect how long you live,” Harris says. “It’s a tragedy that in this community we have decades and decades of the same data showing us at the bottom of mortality outcomes, infant mortality outcomes, educational obtainment. Health disparities and injustices, and structural and institutional racism continue to be pervasive in our communities.”

That’s why BlackLed is pushing for change.

“At some point you have to say, is there a better way to do this?’” Lynch asks. “The city spends almost 70 percent of its general fund on public safety. And yet you have communities where people don’t feel safe. For 23 years, I pastored in Over-the-Rhine, and for most of those 23 years, Over-the-Rhine was the most serviced community in the state of Ohio, which means we had every social service known to man. We had Tender Mercies, City Gospel Mission, drop-in centers, soup kitchens, you name it. But for that same period of time, we were considered one of the worst communities in the state. So let’s not make the same mistake. You can’t service people out of poverty.”

Roley’s largely known in Cincinnati for her efforts for police reform—most recently, she’s spent significant time at city hall, meeting with city manager Patrick Duhaney and others in an attempt to push a zero-tolerance policy for police who use racial slurs. Two cops, one black and one white, were suspended for using the “N” word during separate 2018 arrests.

“We’re in the second decade of the 21st century. And we’re having this conversation,” Roley says. “It’s astounding. It’s appalling. It’s backward. And it’s very telling if you are a leader, and you’re of African descent and coming to this city, this county, this state, you better beware. Those are the messages and nuances we hear.”

Roley learned about activism by watching her grandmother, who fought against the mistreatment of black people across the country. It’s in her DNA, she says. Like Lynch, she’s also a member of BlackLed Change. She won’t say how many there are total. Only that it’s a growing effort.

“United Way has a very corporate board,” Lynch says. Roley says BlackLed is not only asking United Way to conduct an equity audit—a study to ensure its practices, programs, pay and funding structure, or who receives funding, are fair—but, for its board members, that their corporations and organizations do equity audits as well.

“It’s been shown that diversity and inclusion benefit the bottom line, and a lot of folks have been receiving that question, ‘Is your board, is your organization, are your practices equitable?’” says Ozie Davis III, a longtime Avondale community activist and Cincinnati Public Schools board member.

The latter is a relatively new role for Davis, former executive director of the Avondale Comprehensive Development Corporation. After mounting an unsuccessful campaign for Cincinnati city council in 2017, he was tapped in May for a vacant seat on the school board. The seat’s up for election this November; Davis is on the verge of kick-starting his campaign to keep it.

Davis, a United Way volunteer, is among several community members who have met with United Way’s board.

“I don’t think African-American leaders are all that valued,” Davis says. “I don’t necessarily know that it’s just because of race, but more because [Cincinnati is] a longtime traditionally conservative place that doesn’t value different opinions and different ways. Cincinnati is entrenched in itself.”

But Davis is hopeful for change. From his seat on the school board, he wants to use sports and extracurriculars as a means to move the academic needle. It’s also about quality preschool, where there’s a major gap for black kids, he says.

He’s optimistic, even though aforementioned events, like with Cincinnati Police Department, have “shaken” him to the core.

“Are we cool with how it is? I think that’s the first question people have to ask,” Davis says. “Even the Michael Johnson thing has quieted down a lot. I don’t know [what’s going to happen]. But it’s a heavy, heavy lift. Change in this town is going to require a heavy lift. I’ve got some friends that say I’m a fool. But I am hopeful. I’ve got a great faith in Cincinnati people.”

Likewise, Lynch says change will be tough. “Providing services is pretty simple,” he says. “I can open a soup kitchen tomorrow. But building community is a little messier. It takes time.”

So it’s up to him—and others—to stay vigilant.  “There has to be a push. And sometimes it has to come from the outside,” Lynch says. “…We have to do things different.”