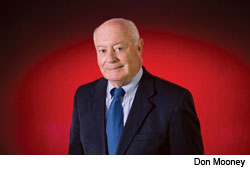 You recently told a cheering audience in Las Vegas that we could take no more Central American immigrants because “we’re full.”

Do you really think we’re full?

Take a drive, as my wife and I did recently, over the mountains of northern New Mexico and Southwest Colorado, over the prairies of Kansas, across Missouri, southern Illinois and central Indiana. You’ll find wide-open and lonely spaces, dotted with fading towns. Stop by Costilla, New Mexico; Las Animas, Colorado; Abilene, Kansas; or Blackwater, Missouri—you’ll discover shuttered store fronts, abandoned homes and empty schools. In some towns, the only sign of new life are freshly painted burrito joints. Immigrants, the folks you want to turn away, have come to work the malodorous cattle feed lots, factory farms and a sprawling Tyson chicken plant outside Holcomb, Kansas. They’re filling jobs that need doing, but that Americans are too busy, or picky, to fill.

You’ve come to Cincinnati seeking votes and campaign cash time and again. Look around the next time you pass through. We have plenty of room. In 1960 we were home to more than 500,000. We now number only 300,000. That’s down 40%. We have wide boulevards, ample parkland and some neighborhoods with fading homes that sure could use some new residents and elbow grease. We would welcome some new, younger families to work hard, fill vacant jobs, open businesses, fill classrooms, cheer on local teams and develop a taste for Skyline. Newcomers would also pay taxes to help us pay for local services, including the underfunded pensions of our city’s police, fire and other public workers.

You won the presidency with Ohio and Kentucky’s electoral votes. Look beyond your adoring base the next time you pass through. Ohio has plenty of room.

Ohio’s population has grown at a paltry 1% in recent years. In 1960, Ohioans amounted for nearly 6% of the U.S. population. Now we are less than 4%. We once had 24 members of Congress. Now just 16. Not many decades ago we had more folks than California and Texas. No longer. Georgia and North Carolina will pass us in population in the next 10 years.

Kentucky is in the same sinking boat, with an aging population that’s grown only 3% since 1980.

We may have more elbowroom these days, but the aging of those of us still hanging on in the “flyover” states goes to the heart of our economic viability.

The New York Times recently printed a color-coded map of the U.S. It shows that in 80% of U.S. counties the number of people in the prime working age population (25-54) declined over the last decade.

A purple swath representing a 10% or more decline in working age population extends from rural New England, across upstate New York, and through the “heartland”—Western Pennsylvania, Ohio, Kentucky, Indiana, Michigan and beyond. The only places where the nation’s working age population has risen are in urban areas in Florida, Texas and along the East and West coasts.

What’s the problem? Our declining birth rate. Population growth is at its lowest since 1937. As the population ages, and our kids head to regions that are hipper and hotter economically, too many Ohio and Kentucky communities are left to struggle. Fewer workers are available to fill jobs, buy homes, and pay for local services. It’s a downward spiral.

With fewer workers, the U.S economy will grow more slowly than the 4% you promised. It’s no coincidence that the folks at Social Security say that by 2034 there will not be enough workers paying into the system to cover benefits for those who are retired.

Your anti-immigrant rhetoric may thrill your devoted base, but America needs immigrant families more than ever to grow and prosper. Don’t lock them in cages or tent cities. Don’t force them back to countries where they face violence, death, poverty or persecution. Send some our way. We have plenty of room.