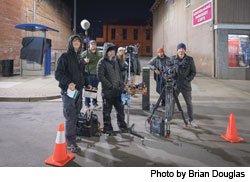 When Charlton Heston parted the Red Sea in The Ten Commandments in 1956, movie posters promised “A Cast of Thousands.” Now movies are made with “A Cast of Dozens,” backed up by a flock of accountants, a swarm of assistants and a Texas herd of extras. And many are making an exodus to the new filmmaking promised land… Cincinnati.

Cincinnati? Swimmin’ pools and movie stars? Hollywood of the Heartland?

As MGM’s Samuel Goldwyn said, “Absolutely impossible, but it has possibilities.”

Our local film history begins in 1950, with gritty clips of Cincinnati in Asphalt Jungle. Then came Rain Man in 1988, with Tom Cruise and Dustin Hoffman counting toothpicks at Pompilio’s in Newport, Kentucky. In 2000, Michael Douglas fought the drug war in the shadows of Over-the-Rhine in Traffic.

Big roles have been scarce.

But now Cincinnati is getting more movie credits than Kevin Bacon. We have our own stars on the sidewalk: Don Cheadle downtown in an old Jaguar, as Miles Davis in Miles Ahead; Robert Redford, playing a bank robber in his final movie, The Old Man & The Gun; Anne Hathaway, in town to film Dry Run; and Nicole Kidman, Bruce Willis, John Travolta, Emilio Estevez…

That means big spending on “hotels, restaurants, catering, gas, construction, furniture, props and wardrobe,” Schlotman says. “TriHealth has taken over medical care [for filming] and Enterprise has even created its own movie division here for car rentals. It’s really exciting to see how far our reach is extending.”

“The producers come to us to buy furniture and props for their movies. They might spend a couple of thousand dollars, which is a big sale for us. It’s fun to be part of something artistic. People who work here watch the movie and say, ‘That’s the couch that was in our store,’” she says.

She thinks there might even be an untapped market for furniture that has been used in a movie. “Maybe it will be worth $100 more if we say Robert Redford sat there,” she says.

Along with familiar local faces in movies—such as PNC Bank President Kay Geiger as a bank manager in The Old Man & The Gun—there’s also a local “cast of thousands” who cater to the film business behind the screens.

Hollywood Meets Cincinnati is turning into a love story.

Directors are attracted by the Ohio Motion Picture tax credit that offers a 30 percent tax incentive. But they fall for the city, Schlotman says.

“One thing people don’t realize is that once they choose Cincinnati, every single director has come back again. They are all repeat customers. Todd Haynes, the director of Carol, is in town again (Dry Run, with Mark Ruffalo and Anne Hathaway, about a lawyer who battles DuPont). It’s the fifth time he’s been back.”

Film Cincinnati makes it easy, she says. “We can help with every process—scouting locations, closing streets, police, whatever is needed. We’re a one-stop place for everything they need.”

“It’s a great compliment to our city,” says D. Lynn Meyers, CSA, who has many credits as casting director for Cincinnati films. “Our city has for generations been dedicated to preservation, showing real stewardship. Our architecture is really diverse. Cincinnati can play a lot of cities.”

Favored backdrops include Carew Tower and its arcade, the Queen City Club, the Roebling Suspension Bridge, time-capsule neighborhoods such as the West End, the classic Hathaway’s lunch counter and courtrooms at the Hamilton County Courthouse.

“Directors have been very vocal about how much they love the city,” says Meyers, who is artistic director of the Ensemble Theater and a member of the Casting Society of America. “That provides great opportunities for our local pool of talented actors.”

A typical movie might require 50 local actors in speaking roles and a thousand more in background work. “Casting calls” for extras go out regularly.

“After the producer sends the script, I call people in for roles that are age- and type-appropriate,” Meyers says. “Background extras get at least minimum wage, and they might work 8 to 10 hours, or sometimes 12 to 14 hours a day. For speaking roles, it’s safe to say about $900 a day. That’s the industry standard.”

Hundreds of local crewmembers also work full time. “The directors find that we have built an industry,” Schlotman says. “We have full-time crews here, and local actors get roles they couldn’t get if they drove to Hollywood.”

Meyers says friends she has worked with in Hollywood call and ask in disbelief, “What? You’re doing another movie in Cincinnati?”

“It’s a competitive market. Thousands of jobs come with every one of these films. We treat people really well and they want to come back. For us to be one of the top film destinations right now really speaks highly of our city.”