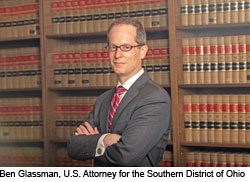 U.S. Attorney Benjamin Glassman is the man behind ‘The Spy Who Paid Me’ and other cases you might have missed in Cincinnati
Peter Bronson
The movies have it all wrong. The real James Bond doesn’t live in London and drive an Aston Martin with pop-up machineguns. He lives in Cincinnati and probably drives a minivan with pop-up cup holders to keep his kids hydrated after soccer practice.

His mission, however, would stir Bond like a bespoke martini. “We have an expectation that we are the best U.S. Attorney’s office in the world, with more impact than ever before,” says Benjamin Glassman, U.S. attorney for the Southern District of Ohio.

“As long as some aspect of a crime touches anything in our territory, we can prosecute it.”

That prosecutor’s version of Bond’s “license to kill” was demonstrated on April Fool’s Day last year, when the long arm of the law reached 4,150 miles across the Atlantic—from federal offices in the Atrium Two tower in downtown Cincinnati to Brussels, Belgium—and tapped a Chinese secret agent on the shoulder with a pair of handcuffs.

Federal court records say that Yanjun Xu, also known as “Zang Hui” and other aliases, was a deputy director of China’s espionage and security version of “KGB,” the MSS. He was waiting in Brussels to meet an engineer from GE Aircraft in Cincinnati, who promised to hand over a flash drive of secrets for better jet-engine performance.

But FBI agents had already caught the GE engineer stealing industrial secrets for China in return for travel and “stipends” from Xu. Using the cover of a Chinese university that works directly with China’s aviation industry, Xu had recruited the engineer through social media and flattered him with invitations to “exchange ideas.”

Court records show that in 2017, Xu paid the GE engineer $3,500 for a one-hour speech in China to buy research that had cost GE billions of dollars and years to develop.

In coded emails, Xu boasted about his success and sent the engineer a shopping list for GE computer files. But by then, the FBI had confronted the engineer. The files that he delivered to agent Xu were edited to protect GE’s secrets, and the leaker was now bait in a trap. Xu was lured to Belgium, busted and extradited to the U.S.

It was the first time a Chinese agent was caught and prosecuted on U.S. soil. The investigation uncovered at least two other American aviation companies that were being robbed by China, whose thefts cost the U.S. hundreds of billions each year. Xu was held in a Michigan federal prison to await trial in federal court in Cincinnati. The engineer was fired, but not prosecuted.

A Bond movie might call it The Spy Who Paid Me. But in Cincinnati, it’s called What? Spies and Secret Agents Here?

That’s because cases handled by the U.S. Attorney’s office that covers 48 counties encompassing Cincinnati, Columbus and Dayton get less attention than agents 001 through 006.

Glassman, who became U.S. Attorney three years ago, wants to change that. “The purpose of prosecution is to achieve justice, but also to deter people, so we want them to know we have a hammer to use, with fair but tough sentencing.”

As the Sopranos would say, “Don’t make a federal case out of it.” Federal prosecutors have time and resources and they don’t cut deals. “We don’t have parole,” Glassman says, “so 85 percent of a sentence is served.”

Working with local and federal law enforcement in a scrabble of acronyms—CPD, DEA, ATF, FBI, IRS, HCSO—and his prosecutors target the small crowd of gangs and criminals who cause most crime and violence. His message: “We know who you are, so get out while you can.”

One of the hammers they swing is a 20-year sentence for anyone who distributes a drug that causes a death. With overdose deaths in record numbers, that one nails a lot of drug dealers.

Glassman says, “We’re trying to inform the public more about what we’re doing.”

Ohio is in the top five states for opioid overdoses. And drug cartels that are “as big as Procter & Gamble and Kroger” are always offering new and improved products, Glassman says.

As the pill-mills were shut down to fight the opioid epidemic, demand shifted to heroin and then fentanyl, a deadly animal tranquilizer. Now demand and supply are shifting again to stimulants—cocaine, meth and prescription drugs such as Adderall and Ritalin, Glassman says.

“We’re seeing carfentanyl [an elephant anesthetic] that is a hundred times stronger and more deadly. As we see some progress against the opioid epidemic, we don’t want to replace that with cocaine and meth laced with fentanyl,” he says.

Meanwhile, they also are battling MS-13, the Central American gang with the motto, “Kill, rape, control.”

“They are quite different,” Glassman says. “Their main purpose is not drugs, but violence and control. They’re not in it to get rich. They don’t live lavish lifestyles. Many have day jobs as roofers or carpet-layers and are diligent workers. A lot of what they make gets sent to El Salvador. They do some drug trafficking, but mainly extortion of vulnerable undocumented immigrants.”

His office indicted and broke up an MS-13 gang in Columbus in 2017. “I’m pretty proud of that case. We completely dismantled the MS-13 clique in Columbus.”

Glassman gives all the credit to his team of prosecutors and FBI agents, such as Cincinnati Special Agent Bradley Hull, who caught Yanjun Xu.

U.S. Attorneys come and go at the whim of the White House. As a Democrat serving a Republican president, he could be replaced at any time.

And he knows most people can probably name the flavor of the month at UDF before they can name a U.S. Attorney. (Best name ever: Flamen Ball, the U.S. attorney for the Southern District of Ohio appointed by President Lincoln.)

But as Bond’s boss “M” might say, sometimes it’s better to work on the quiet side of the street.