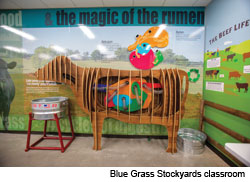 It’s all part of the vision the nine owners of Blue Grass Stockyards had for their new building that was rebuilt in Lexington just over two years after the original building was destroyed by a fire, she says.

For hungry visitors Hayden’s Stockyard Eatery, owned and operated by Lexington’s DaRae & Friends, is the top draw, offering fresh, seasonal ingredients and a comfortable atmosphere for a traditional Southern dining experience, she says.

The restaurant and the Local Connection meat shop try to source most of their products from local farmers, including beef, pork, bacon and produce, Crites says. “We offer that education where consumers can come out here and learn about the facility and learn about the farm-to-table aspect,” says Crites.

The educational aspect of the Blue Grass Stockyards Regional Marketplace is accomplished through a classroom called The Yards, Crites says. “Our owners, besides wanting to have a place for [agriculture] commerce, it was really important to them to have some place that can educate consumers,” she says.

“That’s because at the end of the day the product we’re selling is beef and so how can the business educate people on the cattle and beef industry?” Crites says. It’s an experiential education as visitors walk through the classroom and look at photos and read the descriptions. There’s also a window that overlooks the area where livestock are sold, she says.

“Since we’ve opened we’ve had over 20,000 visitors through that classroom,” says Crites. The business also offers school field trips and partners with the Kentucky Cattleman’s Foundation and the Kentucky Beef Council, which has a certified agricultural teacher on its staff to teach lessons, she says.

In addition to the stores in the Regional Marketplace, Blue Grass Stockyards also has event spaces and 17 other agricultural-related businesses to accommodate the needs of the farmers who sell their livestock at the facility, says Crites.

“Our owners wanted to have a place that our farmers could come and kind of do one-stop shopping,” she says. “A lot of times farmers don’t have the time to get off the farm so when they do make a trip into town they wanted it to be a place where they could do some of their other business.”