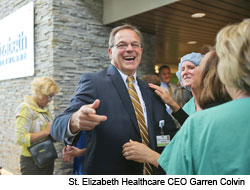 In fact, Colvin’s links to Northern Kentucky’s largest health care organization go all the way back to Oct. 21, 1964, the day he was born in what was then St. E’s maternity ward.

Since that day, Colvin has been a lifelong resident of Northern Kentucky, growing up in Ludlow, and attending Ludlow High School and Thomas More College. He’s been a St. E employee for 36 years (minus one short stint outside the organization), beginning in 1983 with an entry-level job as an accounting clerk.

That turned into a co-op job while he was an accounting and business administration double major at Thomas More. At the time, his career goals fell far short of commanding one of the region’s leading health care organizations.

“My goal was to get a job,” Colvin says. “Thomas More had a 100% job placement in accounting. I was motivated not to be the first accounting student not to get a job.”

In 2010, St. E’s CEO Joe Gross retired after 25 years and chief operating officer John Dubis was promoted to the top job, with Colvin being elevated to the COO role. But in 2015, Dubis retired due to health concerns and Colvin was appointed interim CEO. A few months later, after a national search, the board anointed him CEO.

“That was not even on the radar, to be honest with you,” Colvin says.

But Colvin was well prepared for the job, having worked his way up on the finance side of the enterprise and then moving into operations as COO. In 2008, as chief financial officer, he was instrumental in consummating the merger of St. Luke’s with St. Elizabeth, combining the region’s two major health care groups in what was, at the time, a controversial move.

The merger was completed after St. Luke decided to leave what was then the Health Alliance of Greater Cincinnati, a consolidation that was eventually dissolved.

The merger brought together two institutions that had traditionally been regional rivals in the lucrative world of health care.

“You had two systems that were very fierce competitors,” Colvin says. “They lived and breathed to compete with each other, but had similar cultures and the same desire to take care of the patients. When that came together, it was almost as if we never competed with each other. From day one we said how can make this merger the best for all 400,000 people living in Northern Kentucky.”

The tie-up created an organization that today has more than 6,000 employees, more than 500 licensed beds, a medical staff of 1,300 physicians and net patient revenue of $760 million, making it the largest not-for-profit organization in Northern Kentucky.

The organization has continued to grow under Colvin’s leadership.

In June, it announced the opening of a 15,000-square-foot Women’s Health Center on its Edgewood campus. The center offers screening mammography, bone density scans, physical therapy and other services in a comfortable environment.

In August 2018, construction began on a five-story comprehensive cancer care center that, when finished, is expected to be the largest such facility in Greater Cincinnati and Northern Kentucky.

Situated on 4 acres at St. Elizabeth’s campus in Edgewood, the center is the largest and most expensive project undertaken by St. E. It will accommodate 650 workers, including hundreds of new positions. The goal is to expand cancer prevention, genetic screening, clinical research and treatment options in Northern Kentucky.

“What St. E wants to do is build a program that takes care of the whole patient,” Colvin says. “A one-stop shop where the clinician and the physician actually come to the patient as opposed to the patient traveling to several different locations.”

“One of the things that is important to me, as the largest nonprofit in Northern Kentucky, we feel we have a responsibility to partner with this community to make this community the best it can possibly be,” Colvin says.

Indeed, as CEO, Colvin has pursued partnerships with other organizations to complement and expand on what St. E does.

“Every partnership we have is trying to help this community to not only be the healthiest community, but to be as economically healthy as possible,” Colvin says. “We want to help the community attract business and attract people.”

Colvin’s leadership skills developed during his years as a standout high school and college athlete. Although he downplays those days (“My high school career improves every year,” he jokes), Colvin did excel and has been inducted into both the Northern Kentucky Sports Hall of Fame and the Thomas More Athletic Hall of Fame.

He was a three-year starter in three sports—baseball, basketball and football—at Ludlow High School, and received a baseball scholarship to Thomas More.

In college, he was a pitcher and outfielder all four years and, as a pitcher, did not lose a game until his junior season. He was named captain of several of his teams.

“I learned a lot playing team sports,” he says. “You learn a lot winning; you learn a lot losing. It prepares young men and women for this type of job later in life.”

Now in the health care world, Colvin is prepared to continue to lead his organization and his community.

“Our long-term goal is to lead Northern Kentucky to become one of the healthiest regions in the country,” he says. “Success for us is a growing economy in this community, a healthier workforce, a healthier community. That’s where we’re focusing.”