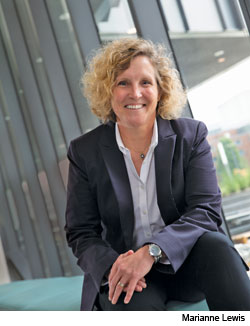 Marianne Lewis, UC Lindner College of Business’ new dean, sees ways to build on the school’s legacy while enhancing what it already does
David Holthaus
If that sounds like a paradox, it’s one that Marianne Lewis is comfortable with.

That’s because Lewis, named in March as the dean of the University of Cincinnati’s Carl H. Lindner College of Business, is a recognized expert in a rather arcane field of business study known as organizational paradoxes.

It’s an area of research that draws on deep philosophical topics, but in the Cliff Notes version it is about learning to function effectively among the competing demands and tensions that pervade our lives, our workplaces and our institutions.

That research will be useful for Lewis as she lays out a vision and direction for the 113-year-old college that she sees as playing a central role in the success of the region’s businesses and in the future of its students.

“It’s about making sure we develop top talent for corporations and helping students figure out who they want to be,” she says. “What their skills and capabilities can be and how to make the most of their time on campus.”

Those demands would be pressing enough, but Lewis lists others, demands she sees as providing “opportunities”: solving problems through faculty and student research, creating new modes of learning, creating lifelong learning opportunities for alumni and being a resource for sectors of the community to come around together.

Lewis is returning to Cincinnati after four years in London as dean and professor of management at Cass Business School, part of City, University of London, considered a top-50 global business school.

She grew up in the rarefied air of Harvard and Stanford, the daughter of an educator at those elite institutions. “My rebellion was I came to the Midwest for college and I never left,” she says.

“I wanted to find my own space,” she says. “When I got here, I felt I found my people.”

Lewis joined UC and the Lindner College of Business in 1997 as an assistant professor of management. From 2002 to 2006 she served as associate dean for innovation and program development. In that role, she says, “I had this wonderful job of figuring out how do we do more of what we do well.”

One of the programs she spearheaded was the Lindner Fast Track project, designed for freshmen to collaborate in teams of 20 and work with a Cincinnati corporation on a real-world problem right off the bat in their first year of college.

“It’s a wonderful way of connecting what we do in the business school with the business community,” she says.

In 2007, Lewis became director of UC’s Kolodzik Business Scholars, an honors program, and in 2009, she was named associate dean for undergraduate programs.

In 2014, she was off to Cardiff University in Wales for a year as a Fulbright Scholar, and, in 2015, she was appointed dean of Cass Business School in London.

After four years there, it was time for a homecoming of sorts.

She’s found a home in Villa Hills, not so far from where she raised her three children, now grown, in Fort Thomas. “They’re spread out, but they’re happy to have me back in Cincinnati and back in our home base,” she says.

She loved London, but is happy to be back. “The difference between a London and a Cincinnati is huge,” she says. “Cincinnati is large enough to have a vibrant diverse ecosystem of large corporations, startups, private businesses, but it’s small enough that it actually feels like a community.

“There’s as much collaboration as there is competition,” she says. And there’s power in that paradox.

“People realize what they take for granted when they come back,” she says. Returning to Cincinnati from London, she says, ”I learned more about the power of community.”

Over there, the school claimed alumni from 160 countries. Here, alumni are more geographically concentrated, which presents an opportunity for the new dean.

“I have a real opportunity to build us into a strong alumni community that helps and supports the city, the school and, most importantly, our students.”

UC provost Kristi Nelson called Lewis “a transformational and collaborative leader whose passion and innovative spirit will position the college for decades of high-impact research, teaching and experiential learning.”

Lewis is the first woman to lead the business college, an honorific she says brings yet another opportunity, and also a responsibility.

“I’m passionate about women in leadership,” she says. “Now I have a responsibility to not only leverage that passion but make sure we are supporting our alumni and students and community and developing fantastic, diverse leaders.

“Inclusive excellence has always been a passion of mine,” she says.

Her focus on inclusion received a huge vote of support recently with a major gift from UC business school alum Richard Thornburgh and his wife, Cornelia. More than $4 million of that $9 million gift announced in December has been directed to scholarship funds that support African American, Hispanic, Latino and Native American students enrolled in the business college.

Lewis arrived to lead the business college just a few months before it opened its 225,000-square-foot state-of-the-art building this fall. The $120 million project was one of the most ambitious construction projects undertaken by the university.

“It’s a game-changing facility,” she says. “It is so student focused and interactive.”

That means greater opportunities for online learning, certificate programs and professional development for executives already in the business world.

“Let’s take the offerings we have now that are all degree-oriented and be creative about how we break that up into smaller pieces to provide the flexibility people need today,” she says.

Lewis, fittingly, offers up a paradox to describe how she’ll lead. “You need to live for the moment and in today, and for the long term and having vision,” she says.

A paradox, yes, but one filled with opportunities.