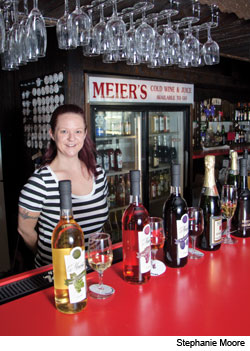 The more than 100-year-old Meier’s Wine Cellars found success in an accidentNyketa Gaffney Some of the greatest creations known to man have happened by accident—Post-it notes, potato chips, the microwave and Cincinnati’s very own J.C. Meier Juice Company, now known as Meier’s Wine Cellars.

“Where the Kenwood Towne Center is today, that’s where the original Meier farm was—163 acres cultivated in 1890 by John Michael Meier of Bavaria,” says Stephanie Moore, Meier’s Wine Cellars retail store manager. “It was his son, John C. Meier, that was interested in the white Catawba grape. His sister drank from his container before John could finish making his wine, helping him realize this good-tasting sparkling grape juice. Bam! The J.C. Meier Juice Company was born.”

During Prohibition, the company served its product to churches and became a community staple. When Prohibition ended in 1933, the Meier family was able to officially reorganize its company as Meier’s Wine Cellars, Inc.

A company that withstands the test of time must adapt to the temperament of its industry. Meier’s Wine Cellars has done just that over the last hundred years. While the company is no longer owned by the Meier family, its property still sits on 6 acres in Silverton and distributes wine and juices to 25 states. In 2014, Meier’s Wine Cellars added contract bottling to its portfolio, assisting inventors and businesses that need help storing product, in addition to continuing to craft its own drinks.

Meier’s Wine Cellars has created over 30 signature wines and more than 10 premium sparkling grape juices over its 100-plus years in business.

“We claim to be the oldest and largest winery in the state of Ohio,” says Moore. “We’re a dessert wine maker, famous for our No. 44 Cream Sherry. It’s a fortified wine, the only one we still age in bourbon barrels! It smells like pancakes, has 18 percent alcohol—a sipping wine, and has a hint of bourbon to it.”

The No. 44 Cream Sherry is even known outside of the Tristate. It’s said to have been shipped to the White House during the Kennedy administration. Meier’s Wine Cellars also has receipts dating back to 1970 that show No. 44 at the annual governor’s ball in the White House.