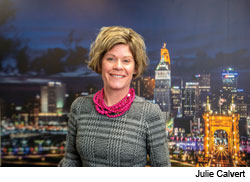 With a convention center, hotel and event arena woefully in need of updates, new CVB CEO Julie Calvert is tasked with bringing conventions back to CincinnatiDavid Holthaus The year was 2001, certainly not the best year Cincinnati ever had. Or the country for that matter. And it certainly wasn’t the best time to start a new job whose focus was selling the city as a destination for business travelers.

The police shooting of an unarmed man in April had sparked three days of rioting in the city’s Over-the-Rhine neighborhood. Despite efforts by city leaders and others to portray the events as “civil unrest,” three days of disorder left the city shaken and brought it the most unwanted kind of national attention.

It was just a few months afterward that Julie Calvert began a job pitching Cincinnati to outsiders for the Cincinnati Convention and Visitors Bureau.

Dave Anderson, a Delta Air Lines executive and then chairman of the CVB, reached out to Calvert with a vision for a convention agency that was more strategically focused on communicating Cincinnati’s strengths to the convention trade. Despite the obvious challenges, “I enthusiastically raised my hand,” Calvert says.

Enthusiasm is a strong suit of Calvert’s and she needed it in buckets three weeks after she started at the bureau, when the worst terror attack in U.S. history struck on Sept. 11, 2001. The attack chilled travel around the country and caused all kinds of economic uncertainty.

But her enthusiasm never waned and she eventually became vice president of communications and strategic development for the Cincinnati USA CVB, driving its national marketing and communications and working to build the region’s reputation. The work paid off with years of growth in conventions and high-profile events such as the 2016 national NAACP convention.

Calvert left the bureau in 2014, but she came back in June, this time as its president and chief executive officer.

“I’m incredibly honored to lead this organization at this important time,” she says.

Since the dark days of 2001, the progress has been remarkable: Over-the-Rhine developed into a destination for dining and entertainment; The Banks and adjacent developments sprouted out of the ground and are still growing; Downtown came alive; and investment spread to neighborhoods like Northside and Walnut Hills.

The Convention and Visitors Bureau helps drive that growth, Calvert says. “The role the CVB plays in furthering that momentum is critical in terms of bringing in visitors,” Calvert says. “That brings tax dollars into the region from the tax on hotel rooms and sales tax. All that feeds the general fund that allows that development to happen.

“We’re about bringing in new dollars to the region,” she adds.

The challenges she faces as CEO, fortunately, aren’t on the same earth-shattering level as a Sept. 11, but they are critical to keeping the convention business growing in the midst of growing competition from other cities.

“It’s well documented that Cincinnati is falling behind our peer cities in terms of conventions, mostly because of our headquarters hotel issue,” she said. The Millennium Hotel, the city’s largest hotel and the only one physically connected to the Duke Energy Convention Center, has needed renovating for some time and is not operating at its 870-room capacity.

Meanwhile, the peer cities that Cincinnati competes with for convention business—such as Columbus, Indianapolis, Louisville and Nashville—all enjoy up-to-date headquarters hotels, in some cases more than one, that offer conventioneers easy, comfortable access to their convention halls.

The issues go beyond the hotel, Calvert says. The Duke Center needs to be expanded and the city is losing convention traffic because it’s no longer large enough to get the biggest meetings.

“Our convention center has not been expanded in 12 years,” she says.

An up-to-date headquarters hotel and a bigger convention center are just part of what Calvert sees as a total package that can attract big out-of-town meetings.

“Getting a contemporary, competitive convention package is really our priority,” she says. “That’s where our growth is going to come.”

The package should include an update to the city’s indoor arena. U.S. Bank Arena is also overdue for a makeover and high-profile sporting events and concerts have bypassed Cincinnati in favor of the competitors in Columbus, Indianapolis and Louisville.

Add to that the general lack of development in downtown’s southwest quadrant, where the Duke Center is located, and you have a plate full of heavy lifting for the new CEO and her team.

“As we look for growth and look to the future, it really is that southwest corner that can be a game changer for downtown and I mean for our restaurants, our retailers, our hotels, small businesses, minority-owned business,” she says. “All those interests grow when you have a very healthy convention industry.”

Before jumping headlong into those big projects, Calvert devoted her first three months to a strategic review of the CVB. “We looked at our financials and at the people who were organized to do the work,” she says. “As a result, we made some organizational changes.”

In March, after a national search, Andy Conklin started as executive vice president for sales and marketing. He was previously vice president of sales responsible for owned and managed Trump Hotel properties. He also has held senior sales positions with Starwood, W, Sheraton and Hyatt Hotels.

Also in March, the CVB announced the promotion of Jason Dunn to group vice president of diversity sales and inclusion to lead a new department that consolidates several CVB initiatives.

In 2014, Calvert left the CVB and started Source Cincinnati, connecting the region with national media and elevating the “Cincinnati Story” into the global spotlight. That’s resulted in favorable stories in national outlets such as the New York Times, USA Today, The Atlantic and Black Enterprise.

“Five years ago, it was Julie who had the vision to create an initiative dedicated to telling our story in a game-changing way,” says Scott Robertson, Source Cincinnati’s board chair. “Now she takes that experience, passion and vision to the CVB, and our destination couldn’t be in better hands.”

Calvert comes by her enthusiasm for the region as a native Cincinnatian, a graduate of Finneytown High School and Miami University. She worked in journalism in Boston and Cleveland after college before boomeranging back to her hometown to work in public relations before she got the call from the CVB. After a national search, the bureau’s board last May chose one they knew well for its next leader. With her husband, Chris, two sons and a home in Anderson Township, she’ll be working as she has for years to make Greater Cincinnati even greater.