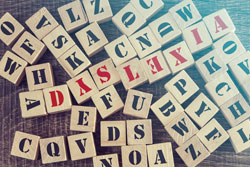 As a teacher, she’s seen children become so worn out by others’ misguided perceptions, like that they are lazy, stupid or have a behavior problem, that at a certain age they can end up just accepting those ideas. Undiagnosed, or lacking targeted help for their learning disability, some decide to just go with and live up to those false labels, in a kind of frustration-fueled, understandable rebellion.

But it was what happened at home, working yet again on reading homework with her then 6-year-old daughter, that really drove home the point—driving her career to a finely tuned point in the process.

“One afternoon, over spring break doing makeup work, she got so mad she stood up and just threw her chair,” says Ball-Dannenberg. “It was a turning point for me—she was screaming for help.”

On the surface, her daughter Delaney fit the profile that has emerged for a number of dyslexic children—one that may seem counterintuitive for a child who struggles with reading and writing.

“They’re smart, with an average to above-average IQ—they can often fool you for a very long time,” Ball-Dannenberg says.

“If you spoke to her, you would see she was highly verbal, with a great vocabulary, who loved school and had a ton of friends,” she says. “But at home it was a nightmare.”

Many parents of children like Delaney have found themselves in this puzzling situation, perhaps even having to wage an uphill battle with their child’s school to help identify the problem, or get the proper, research-based help for it.

By the end of first grade, Delaney couldn’t yet write her name or sound out consonants, and despite five-day, hour-long tutoring sessions at school, “she was not closing the gap,” her mother says.

Her teachers were confounded, too, suggesting not enough intervention was the problem. But Ball-Dannenberg had had enough.

With the specter of second grade approaching—a time when not knowing words by sight could be a real impairment for students—she found a private evaluator who identified Delaney as dyslexic.

Identifying these students at an early age is “absolutely critical,” to not risk losing them, Ball-Dannenberg says.

“We couldn’t wait until the third grade,” she says of her daughter. “She was this lovely, bubbly 6-year-old who hated herself.”

In Cincinnati, there are resources for parents who suspect their child’s reading struggles stem from dyslexia, a neurological disorder that inhibits a person’s ability to process language. One in five people have dyslexia, according to the National Institutes of Health.

The Children’s Dyslexia Centers of Cincinnati offer reading and writing intervention at no cost, operating its services by donations at offices downtown and in Norwood.

Ball-Dannenberg, who is on the Reading & Literacy Discovery Center board, opened her own company that serves this population in 2007, called Dyslexia Testing and Information Services LLC.

The company provides clinical diagnosis for learning disabilities regarding reading, math and written expression. Motivated by her daughter’s struggles, Ball-Dannenberg built on her teacher’s credentials, learning how to test for dyslexia.

Managing all the company’s student cases, Ball-Dannenberg also rounds out her staff with a clinical psychologist and several subcontractors who tutor using the well-known, research-based Orton-Gillingham approach or the Barton Reading system, a program parents can purchase and learn how to administer themselves.

However, Ball-Dannenberg cautions, since dyslexia is highly hereditary, it is important that the parent doing the tutoring does not also have the disorder. Consideration should also be given to whether a child tutored by his or her parent will work for the pair.

Research continues to find that genes play a part in reading failure, Ball-Dannenberg says. In dyslexic brains, neurons on the left side of the brain do not connect, but PET scans—which show that difference—also show regenerated neurons after Orton-Gillingham training, she adds.

“Springer offers a very comprehensive program that helps each student know what their learning profile is,” Barnhart says, adding that Springer’s program includes instruction in art, music and physical education. Language, occupational and psychological services are available as needed. “We’re the premier school resource in the city,” she adds.

Students travel from neighboring states to attend, she adds. They typically can return to their home schools once they have learned the strategies and tools Springer teaches them for working with their learning disability.

Ball-Dannenberg counsels parents to really understand what is going on with their child’s processing abilities rather than exhorting their children to simply “try harder.” She also recommends finding something else the child excels at, which may be something entirely different than the typical activity, like soccer.

It may take several tries, during which a parent should remain supportive and positive when something doesn’t pan out. Often, art and the other right-brain-derived abilities are well developed in dyslexic people.

That is why geometry, for example, is often the welcome antidote to nightmare subjects like calculus and algebra for people with this disability, she says. They can see and make sense of the visual subject.

As for Delaney, her personal mastery over dyslexia continues, having graduated with honors from St. Ursula Academy with plans to attend the University of Denver next. She also holds the distinction of being the only author to read her own book on the website Learning Ally, another resource for children and people with dyslexia.