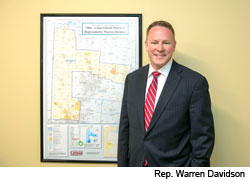 Warren Davidson parachutes into Congress
Peter Bronson
When Warren Davidson told his high school buddies he wanted to become an Army Ranger, they wondered, “You mean like a Forest Ranger?”

No, not exactly. Army Rangers would eat Yogi Bear for breakfast.

And that’s just a warm-up in the first muscle-pulling phase called “Crawl.” About half wash out, most in the first week.

That’s no exaggeration. A Ranger training manual says, “Five-Mile Run training should include stretching and a calisthenics session with sufficient intensity to produce Total Muscle Failure (TMF) in a moderately fit soldier.”

“It’s complete exhaustion. It doesn’t matter what kind of shape you’re in, everyone is crushed,” says Davidson, who was in top shape as a soldier in the 101st Airborne.

Those who survive go to the next stages: “Walk,” then “Run.” That’s when it gets serious. “Sleep deprivation is huge, and you have limited food. You are burning more calories than you take in. You are in deficit for food and sleep,” he says.

Even Superman soldiers lose 20 or 30 pounds. They freeze while climbing Georgia mountains. They parachute into sweltering Florida swamps on starvation rations and three hours of sleep a night. The grueling workouts are followed by intense study and mental stress that pushes willpower past the redline, where even the toughest human spirit begins to clatter, smoke and spiral into a crater of quit.

Only a third make it without failing or being “recycled” back to the starting line. Davidson was in that elite third.

He also was one of only 75 enlisted soldiers chosen from the ranks for his West Point class of 1,200. “I was afraid I would fail out. I wasn’t a valedictorian or Captain Everything like the ones who had appointments. That was not me in high school.”

But the varsity wrestler who was nicknamed “The Professor” after the character from Gilligan’s Island at Sidney High School graduated in the top 10 percent at West Point.

So it’s no surprise that he won his first race for any political office to become Ohio’s 8th District Republican in Congress, replacing a 25-year legend, former House Speaker John Boehner.

Boehner resigned at the end of September 2015. In November Davidson was approached by Rep. Jim Jordan, R-Urbana, and asked if he would run. Once he made up his mind, he collected enough signatures by Dec. 14 and filed 10 minutes before the deadline on Dec. 16.

He credits his wife and Hillary Clinton for making up his mind.

When he told his wife, Lisa, about the meeting with Jordan, she asked, “What did you say?”

“Are you the same lady that gets upset when I’m late for dinner?”

“But this is for the country,” Lisa said.

Davidson was already a success. He earned an MBA at Notre Dame, but passed up a great job in Chicago to help run his father’s machine tool business that was smaller than his first rifle platoon. He took that to more than 200 employees and launched his own injection molding company, Global Source Molds in Troy.

But he had seen firsthand how government interferes and strangles growth with regulations. He had gone to Germany to witness freedom be unleashed as the Berlin Wall was smashed.

And he was seething about what he had seen on TV during the Benghazi hearings, when Secretary of State Hillary Clinton was asked about the deaths of four Americans and angrily replied, “What difference at this point does it make?”

“As an Army guy, that left me more than a little fired up.”

So he defeated a primary field of 14 candidates, including seasoned politicians; won a special election in June 2016; and won again in the general election that November.

“I figured the mood was ripe. People were sick of the same path: law school, local office, state government, then Congress. People want diverse experience. If you want different results, send someone with different experience.”

His motives to serve were never in doubt. He had already put his life on the line for his country. Phonies and poseurs don’t survive Ranger training. “I love this country with a soldier’s passion,” he told voters.

“The Army gave me the best leadership training our country can offer,” he adds. “At West Point they liked to say that ‘Much of history was made by the people we taught.’”

The Army is no chin-stroking think tank, he says. “You need a sense of urgency if you want to solve problems.”

Davidson is a member of Jordan’s “drain the swamp” Freedom Caucus, but insists, “I’m not Jim Jordan’s guy or John Boehner’s guy. I’m my own guy. I just try to be Warren.”

And Warren’s top concern is feckless spending: “Despite all the campaign rhetoric, there is no will in Congress to control spending.”

He hears the clamor that Republican cuts will tear holes in the safety net of entitlements, but wonders why that net gets wider and thicker when the economy is thriving and jobs are abundant. People who can work need to discover “the dignity of a job,” he says.

“It’s not compassionate to bankrupt America.”

Some members of his own party are “standoffish” in what he calls “the junior high lunchroom” of Congress. “A handful are still upset” that Boehner was not replaced by a country club Republican tested and approved by the U.S. Chamber of Commerce.

But Davidson is not intimidated.

Ranger training says, “The challenge of leading a group of peers who have reached common levels of mental and physical exhaustion due to sleep and caloric restriction, while at the same time thinking critically to devise creative tactical solutions, is extremely difficult … [but] essential to creating combat-ready leaders.”