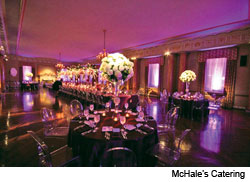 McHale’s Catering is bringing something new to downtown Cincinnati with an update of a historic venueMadison Rodgers McHale’s has been a part of the Northern Kentucky community for a long time—thanks to multiple locations like the Gardens of Park Hills, Drees Pavilion and the Pinnacle and Grand ballrooms—but the event and catering company is now adding a little Cincinnati to its banquet hall list.

From Catering to More

Chuck McHale’s catering career moved into full gear in 1990. “In the beginning, we used to do all catering,” McHale says. “We used to go to businesses and church halls and do weddings.”

McHale wanted to expand his business, so in 1999 he built his first banquet hall. “It was called The Marquise and it was located in Wilder, Kentucky,” says McHale. The new location proved to be successful, and in 2003 McHale’s took over the Gardens of Park Hills. “It was around this time that we wanted to be known as the best wedding caterer in the area,” McHale says. “That was our key focus. We wanted to do lots of weddings and be the best at it.”

In 2008, McHale’s became the exclusive caterer of the Grand Ballroom in downtown Covington and in 2013 opened the Pinnacle Ballroom next door. Currently, McHale’s owns four banquet halls in Northern Kentucky.

Moving to the City

McHale’s is now taking over a venue in the center of Cincinnati at the Cincinnati Club, located at 30 Garfield Place.

As a caterer, McHale’s has partnered with Cincinnati venues such as Music Hall, the National Underground Railroad Freedom Center, Rhinegeist Brewery and The Center at Fountain Square, so McHale knew the area and customer base.

“We kept looking for an opportunity to have our own venue downtown,” says McHale.

McHale found that opportunity with the Cincinnati Club. Built in 1923 by Cincinnati architecture firm Garber and Woodward, the building features art-deco design throughout the interior.

While the building was already beautiful, McHale’s recently restored and renovated the Cincinnati Club to further improve its old-world glamour.

The Cincinnati Club has four banquet rooms—two on the first floor and two on the second. The first-floor Harrison Ballroom is 3,400 square feet, can accommodate 180-200 guests and features columns and matching marble fireplaces. A more intimate space on the first floor, the Pompadour Ballroom can host 80-100 guests and has a marble fireplace and glittering chandeliers.

On the second floor, the Gold Ballroom is 2,200 square feet, can accommodate 100-130 guests and includes unique features like a zodiac compass on the ceiling, long panel mirrors and crystal light fixtures. The second floor is also home to the largest of the venue’s four ballrooms, the Oak & Grill Ballroom. The 4,100-square-foot space has the capacity for 275-300 guests. The room gets its name from its rich oak wainscoting, and it features a massive fireplace and mural.

“Both ballrooms [on the first floor] are completely done now,” McHale says. “We have new window treatments and the floors have been redone.”

The building’s entry itself makes a statement with its rounded marble staircase and balcony.

In addition to its classic spaces, those who book the venue are also able to enjoy many other perks. This includes a five-hour event window, wedding planner services, set up and break down, complimentary vases, full-length linen tablecloths and a champagne toast for the bridal party.

The Cincinnati Club is also conveniently located two blocks from Fountain Square and is surrounded by many hotel choices with shuttle services. There is plenty of parking nearby, including several lots and a parking garage.

McHale says that the service at the Cincinnati Club is another bonus couples get with the venue.

“Our emphasis is on wedding,” McHale says. “We don’t use temporary staff. We have about 190 people on staff. Everyone is a McHale’s employee.”

He adds that McHale’s staff members go through a training program to ensure that they are prepared to do the job.

“Our customer satisfaction has averaged over 98 percent,” says McHale. With the addition of the Cincinnati Club to its group of venues, McHale’s is looking to bring that same level of satisfaction north of the river.