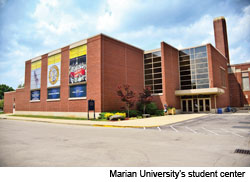 Marian University offers a comfortable, personal appeal for studentsEric Spangler For high school students in southwest Ohio looking for a college with a community feel and one-on-one personal attention from faculty and staff then Marian University near Indianapolis, Indiana, might be the best choice.

“We are going to be the right fit for a lot of students that are looking for that type of school,” says Mark Apple, vice president for marketing communications at Marian University.

Marian University is a private, nonprofit Roman Catholic university founded in 1851 by the Sisters of St. Francis, Oldenburg, Indiana. It serves 2,431 undergraduate students, 1,164 graduate students and 650 medical students with a student-faculty ratio of 14:1.

Apple says there is a large Catholic high school base in southwest Ohio and Xavier University and the University of Dayton aren’t always the right fit for everyone who wants to continue Catholic higher education.

Plus, more students want to go out of state for college, he says. And Indianapolis—about a two-hour drive from Cincinnati—is very similar to The Queen City in size, culture and its strong downtown, says Apple.

In addition, more students want to go to college in a city rather than a small college town because they can get connected to large employers for internships and jobs, he says.

“The students feel comfortable here,” he says. “Also, we’ve already got a good base of students from Cincinnati on campus so odds are the incoming freshman are going to know people from their high school or from the athletic programs that they participate in here at Marian.”

Although Marian University is a private school, Apple says the school offers multiple scholarships, grants and other types of financial aid that can reduce the cost of tuition significantly. He says 99% of Marian University students receive some sort of institutional grants or scholarships.

“A lot of people assume that a private school is going to be more expensive than going to a public school, but the reality is it can be as affordable as going to a state school in Indiana,” says Apple.

The No. 1 most popular degree Marian University offers is nursing, followed by biology, business and management, and marketing, he says. The university also has a growing school of education—Klipsch Educators College, says Apple.

Students who want to teach spend five years at the school, but the fifth year they are student teaching and getting paid, he says. In addition, once they’ve successfully completed the fifth year students earn both a bachelor’s and a master’s degree, says Apple. “It’s a pretty attractive option for people who want to be teachers.”

Marian University also has a medical school, which opened in 2013. The school gives preference to its undergraduate students and guarantees them an interview for the medical school if they graduate with a 3.5 grade point average or higher, he says. “A lot of students see that as a good pipeline into medical school,” says Apple.