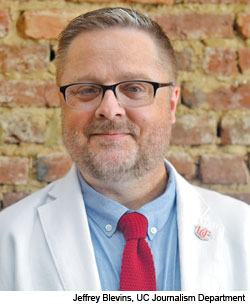 Contrasting two local examples of call-out culture and the social media firestorms they created in their wakeKevin Michell Cancel and call-out culture is a hot-button topic that has engulfed our society and online interactions. Canceling refers to calling out a person or entity through social media to bring attention to perceived injustice, inappropriate behavior or prejudice and then utilizing digital platforms to spread the message to encourage a boycott of the offending party. But while this mechanism has been positively used by victims of harassment, abuse and discrimination to call out the actions of more powerful people, like prominent businesspeople and celebrities, the discourse surrounding cancel and call-out culture has ballooned into a national debate about its merits and problems.

Early national examples revolved around sexual harassment and the #MeToo movement, such as when former senator Al Franken was accused of forcibly kissing Leeann Tweeden on a 2006 USO tour, which Tweeden made public in a 2017 blog post, eventually resulting in his resignation. But as call-out culture has evolved into a way for anyone indirectly affected by perceived offensive conduct to cast attention on a person or entity’s actions—like in the cases of actor Roseanne Barr for her vocal political stances seen as offensive and director James Gunn for making graphically explicit tweets seen as tasteless—discourse about call-out culture has shifted to whether it encourages impulsive reactions in people and a mob mentality that does more harm than good.

Cincinnati has witnessed a few highly visible instances of call-out culture in the last two years and two in particular stand out for the contrast in public reaction.

On Oct. 7, 2018, Evelyn Reid shared a video on her Facebook account of Terry’s Turf Club owner Terry Carter saying a sexually explicit and derogatory remark to her. The incident occurred after Reid, who had been working a shift at the restaurant, was fired by Terry Carter. The 3-minute-long video includes Reid asking for an explanation of why she had been fired and, after some back and forth about whether he had to provide a reason for firing her, Terry Carter telling Reid, “Keep your legs open.”

Public response—particularly on Facebook—was generally supportive of both Reid’s action and, when Carter sold the business in December, the outcome. On the whole, perception seemed to be that Reid was right to capture and publicize Carter’s inappropriate actions. Business plummeted at Terry’s Turf Club and the restaurant’s online reviews became more negative in its wake.

On Oct. 27, 2019, Cincinnati City Council member Chris Seelbach used his social media platforms to share and amplify a Facebook post by TriHealth nurse Cindy Carter, of no relation to Terry Carter. Cindy Carter’s post to her own Facebook profile contained explicit, homophobic and transphobic remarks about the gay and transgender communities. Fellow TriHealth employee Sabrina Sells posted to TriHealth’s Facebook page on Oct. 25 expressing her concern about Carter’s views. The post reached Seelbach after he was tagged in a separate Facebook post’s comments. He then shared to his personal Facebook profile Cindy Carter’s post and expressed his discomfort with potentially using TriHealth’s services in light of her views. In his Twitter post on the same, Seelbach added that he would not use TriHealth’s services until Cindy Carter was fired and included the hashtag #BoycottTriHealth.

Seelbach’s call-out inspired a lot of passionate responses on all sides of the issue and quickly ballooned into a media story that didn’t just encompass potentially discriminatory biases among health care practitioners but also Seelbach’s role in amplifying the story and whether his large audience and platform made his post inappropriate.

“I know I have a platform and so the story kind of has blown up. And lots of people have reacted and I’ve heard a lot of feedback on social media,” Seelbach said in an Oct. 28 video to his personal Facebook profile, before stating that he talked to TriHealth that day, found the organization was placing Cindy Carter on administrative leave and that he thought TriHealth was doing the right thing. He later said in the video that he thought TriHealth’s response on the evening of 27th was inadequate before the company acted more strongly the following day.

While both instances are examples of a person calling attention to offensive behavior and the offending parties both experienced a comeuppance, public opinion differed vastly on the appropriateness of Reid and Seelbach’s call-outs. On the latter, much of the backlash toward Seelbach centered on whether it was right for him to call attention to Cindy Carter’s social media post as a prominent and visible holder of political office in the city. Some other negative reactions revolved around whether Cindy Carter’s speech protections were being violated despite the explicit and anti-LGTBQ opinions she shared.

The Seelbach case is particularly trenchant to the current debate on cancel culture. The focus of conversation shifted from the alleged offensive actions to the people involved and the differing opinions shared by everyone on social media about their roles as victim and offender.

Jeffrey Blevins is the head of the journalism department at the University of Cincinnati and has spent recent years both studying and teaching the relationship between social media and modern communication in society.

“For me, one of the things that really stands out in contrasting these two cases is to look at where the power resides in these relationships,” Blevins says. “You take Terry’s Turf Club where you have a waitress who is being fired and is being sexually harassed in the process—she doesn’t have really any power in that situation. Her social media post was the one platform she had to push back with, to balance out that unfairness, to call attention to what was going on.

“But the case with TriHealth and Seelbach is very different in the sense that it’s like, yes, you have a nurse who posted some very unsavory things but Seelbach already has a position of power. Seelbach didn’t necessarily have to rely on social media for this.”

Blevins cites another headline-grabbing example that touched Cincinnati in the last two years—the video of Covington Catholic student Nicholas Sandmann and Nathan Phillips standing face-to-face at the Lincoln Memorial in January 2019. Reaction to that video was swift and, though additional information lent context over the next few days to the circumstances surrounding that video, many people sharing their opinions stayed entrenched in their viewpoint.

“Once people got on their team in that case, it was rare for anyone to want to backtrack,” Blevins points out, adding that the most damaging aspect of call-out culture often isn’t the instigating social media post, it’s the pile-on that occurs across digital discourse that follows. Social media encourages quickly firing off an emotional reaction to news, circumstances or other people’s opinions. Particularly in instances that touch on politics, the resulting conversation often devolves into social media rock-throwing among people reacting and not directly involved with an occurrence of discrimination or harassment. Such is why the dialogue surrounding Seelbach’s amplification of Cindy Carter’s post may have prompted backlash from many people, stemming from a perfect storm of his political stature, indirect involvement and social media visibility even though Seelbach justifiably felt personally aggrieved by a nurse belonging to a prominent health care organization sharing views that could conflict with her duty to treat all patients with the care they require.

“I could see doing the same thing myself,” Blevins says. “He reacted to something that he was rightfully outraged about.”

Indeed, this implies a need for greater discussion not about the merits of specific parties involved in a single instance of call-out culture but one that examines the differences between punching up—in the sense of a less prominent person calling out the actions of a more visible one—and punching down when a public figure uses the same platforms to cast attention on things they find wrong or inappropriate. And the continuing prevalence of social media call-outs may also require a more introspective approach to how society talks about the action and the resultant fallout.

“We tend to not have these conversations proactively; we tend to have them reactively where something like this happens and it’s a postmortem exercise,” Blevins says.

For all the anger and unrest felt by opposing viewpoints in instances of call-out culture, Blevins does see these moments as important case studies society can use to educate itself about social media interaction and the need for acknowledging misinterpretation and misunderstandings coming from limitations of context.

“You look at the engagement that we all have with social media these days and it kind of touches every part of our lives. But it really is like a literacy and it has to be more than just a high school class or a college class. Media literacy is something that we should be thinking about should be in our education system.”

Perhaps, then, the major problem with cancel and call-out culture isn’t with the act of calling people and their actions out, it’s with how we deal with the piling on—both in support of or opposition to the parties involved—made so easy by the omnipresence of social media, that inevitably takes place afterward.