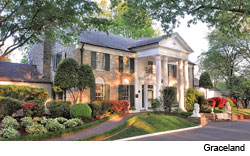 The Volunteer State offers a respite from the long, cold winter monthsSara Prchlik The winter season can be tough in Ohio. One day it’s 55 degrees with hopes of spring and the next it’s raining ice. Luckily for us Tennessee is only a car ride away. Rather than suffer through the long, cold winter months stuck in Ohio, jump into your car for a long weekend at one of the several exciting cities Tennessee has to offer. There’s no better cure for the winter blues than a weekend away.

For decades, Memphis has been known as the home of the blues, soul and rock ‘n’ roll. With authentic neighborhoods, outstanding barbecue and a rich music history, a visit to Memphis gives visitors a true understanding to the phrase, “Why it all starts with Memphis.” About a seven-hour car ride from Cincinnati, Memphis offers visitors several stimulating destinations, including:

Dive into Elvis Presley’s career at the ultimate rock ’n’ roll destination. As the second-most visited house in the country, Graceland allows visitors the opportunity to unravel the personal and professional sides of Elvis through a variety of his costumes, cars, awards and much more.

“Graceland is a national historical property,” says David Beckwith, of the Beckwith Co. “Visitors see the personal side of Elvis when they tour the mansion. The new Elvis Presley entertainment and exhibit complex explores the professional side.”

While touring the mansion, visitors are welcomed to participate in an audio tour narrated by John Stamos with commentary from Lisa Marie Presley to listen to exciting and never-before-heard stories and histories of the King himself.

“The many exhibits showcase his career and his influences,” says Beckwith. The recently added Guest House hotel is “AAA rated, Four Diamond resort decor inspired by the decor of Graceland and Elvis’ taste,” he adds.

Other exhibits include Elvis Presley’s themed discovery exhibits that showcase Elvis’ influences, important facets of his incredible life and his role in launching the music and pop-culture revolution. Other discovery exhibits include “Lisa Marie: Growing Up Presley,” which features artifacts from Lisa Marie’s childhood, music career and personal life; “Presley Cycles,” which showcases Elvis’ motorcycles and other vehicles; the newly expanded “Private Presley,” which focuses on Elvis’ service in the U.S. Army; and “Icons: The Influence of Elvis Presley,” an exhibit that showcases Elvis’ influence on other artists and more, says Beckwith.

Graceland opened in 1982 and is one of Memphis’ largest tourist destinations bringing in thousands of visitors each year from all around the globe. With something for everyone each visit to Graceland is unique. “Ask 100 fans [their favorite exhibit] and you’ll get 100 different answers,” says Beckwith.

Known as Home of the Blues and America’s most iconic street, the atmosphere of Beale Street is unbeatable. Since the Roaring ’20s, Beale Street has offered visitors countless special experiences along the 1.8-mile strip. Visitors are welcomed to nightclubs, including the iconic B.B. King’s Blues Club, numerous dining options like Rum Boogie Cafe and a variety of Memphis original shops such as Memphis Music.

Get to know the true depth of Memphis’ rich music history at Memphis Rock ’n’ Soul Museum. With a comprehensive music experience, the Rock ’n’ Soul Museum’s exhibits take visitors from the rural field hollers and sharecroppers of the 1930s, through the explosion of Sun, Stax and Hi Records, inside the musical heyday of the ’70s all the way to Memphis’ global influence today. The Memphis Rock ’n’ Soul Museum was created by The Smithsonian Institute to tell the story of musical pioneers who, for the love of music, overcame racial and social economic barriers to create music that shook the world.

As a mountain town offering a wide variety of attractions and the gateway to the Great Smoky Mountains National Park, Gatlinburg has visitors returning year after year. From all around the world visitors travel to the eastern Tennessee town for vacations, outdoor adventures, family fun and memories to last a lifetime. About five hours by car, Gatlinburg offers several attractions creating a perfect Tennessee travel destination, including:

Upon entering downtown Gatlinburg, the sheer volume of attractions, food options and nightlife leave visitors amazed that they’re still in Tennessee. Gatlinburg offers tasty cuisine from Mexican to pizza houses to authentic barbecue, including Delauders Smoky Mountain BBQ, Bones BBQ Joint and Hungry Bears BBQ. Popular attractions in downtown Gatlinburg include The Space Needle, where guests are welcome to ride over 400 feet to the top for a breathtaking 360-degree view of the Smoky Mountains, and Rowdy Bear Mountain, which allows visitors the opportunity to soar high above Gatlinburg in the first-ever mountain glider. Come nighttime visitors are welcomed to enjoy the Sweet Fanny Adams Theatre & Music Hall, the city’s only musical comedy entertainment attraction.

Ripley’s Aquarium of the Smokies

Voted the Best U.S. Aquarium by USA Today and One of the Top 5 Aquariums in the USA & the World by TripAdvisor Travelers’ Choice, Ripley’s Aquarium of the Smokies is a destination visitors do not want to miss. Mary Phillips, sales and marketing director of Ripley’s, says visitors are welcomed to, “explore the amazing aquatic world up close! Marvel at 12-foot sharks, the giant sea turtle, thousands of exotic sea creatures and playful penguins swimming as you enjoy the state-of-the-art clear underwater tunnels throughout.” Ripley’s Aquarium of the Smokies is able to offer visitors the ultimate underwater experience without getting wet, says Phillips.

With a mission to provide a top-quality and world-class marine life facility that fosters environmental education, conservation and research while simultaneously providing entertainment for visitors of all ages, Ripley’s Aquarium offers exhibits including “The Tropical Rainforest,” “Ocean Realm,” “Coral Reef,” “Gallery of the Seas” and “Shark Lagoon,” says Phillips.

Since opening in 2000, Ripley’s Aquarium of the Smokies has welcomed over 15 million guests and has created memories to last a lifetime with exciting exhibits and interactive experiences with horseshoe crabs, jellyfish and seasonal live mermaids. As one of Gatlinburg’s most visited destinations, Phillips says that Ripley’s is “proud to be part of such an amazing community.”

While visiting Gatlinburg, visitors are invited to stay the night at one of the luxurious and rustic chalets and cabins for rent. Either minutes away or within the Great Smoky Mountains, Gatlinburg chalet and cabin rentals offers rentals among the breathtaking hikes and views of the most visited national park, as well as access to the fun-filled attractions of downtown Gatlinburg.

In a world where music is the universal language, everyone is at home in Nashville. Only a four-hour car ride from Cincinnati, Nashville offers a countless amount of activities throughout the day and transforms into a city unlike any other at night. While visiting the Music City there are several locations visitors do not want to miss, including:

Known as the Home of American Music and the Country’s Most Famous Stage, The Grand Ole Opry meets expectations as Nashville’s top tourist destination. Welcoming guests and artists from around the world several times a week, “The Opry connects some of country’s top artists with its biggest fans via shows airing on its flagship radio station as well as on satellite radio and the internet,” says Jessie Schmidt of Schmidt Relations.

With a showcase of a wide variety of music including today’s top hits, classics, bluegrass, Americana and more, the Grand Ole Opry spotlights “different generations and everyone from today’s top artists such as Blake Shelton and Carrie Underwood to all-time greats, including The Oak Ridge Boys and the Charlie Daniels Band,” says Schmidt. Beginning as a simple radio broadcast, today the Grand Ole Opry creates one-of-a-kind entertainment for hundreds and thousands of visitors by showcasing a mix of country legends and contemporary chart-toppers that followed in their footsteps through exhibitions and performances.

As a neighborhood built out of the buildings that were once used by Marathon Motor Works, Marathon Village has created a creative community of unique retail, business, entertainment and more among the busy streets of Nashville. As a diverse destination where all walks of life coexist, visitors are invited to spend a day exploring the shops, commercial artists, performing arts and entertainment, food and drink and more offered throughout Marathon Village.