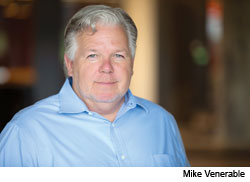 Mike Venerable and CincyTech are on a mission to make the region an innovation destinationLiz Engel It’s been a busy 12 months at CincyTech. But sit down for a chat with Mike Venerable, CEO of the regional seed fund investor, and that certainly seems par for the course.

Over the last year, CincyTech has moved into new digs at the 1819 Innovation Hub, near the University of Cincinnati; it added its 82nd portfolio company, and counting; and, while team members declined to comment, per an SEC filing, the group in the midst of raising its fifth, and largest, fund to date. Or, as some like to say, business as usual.

There’s been a lot of talk lately—and national press—about Cincinnati’s booming startup scene. Fledgling businesses here have access to accelerators, incubators and angel investors, sure. But what Venerable and team are doing is different than anybody else. CincyTech provides and organizes early seed-stage investment—in other words, the first money in, a high risk, high reward proposition—and it’s continually betting big at home. Eighty of the 82 investments CincyTech has made, it’s made in Cincinnati (the other two are also Ohio based, just up Interstate 71 in Columbus).

“We want our founders to swing hard,” Venerable says. “This is not for everybody. In fact, it’s actually for the very few.”

It almost wasn’t his path, either, or at least it wasn’t early on. Venerable, a first-generation college grad from Hamilton, left home with an ambitious plan to join the National Security Agency. At that time, The Puzzle Palace, a novel by Washington reporter James Bamford, was a popular read. Venerable was fascinated by it—it was the first time anyone had detailed the organization’s inner workings. The NSA only hired mathematicians and computer scientists, he says, and military veterans—so he joined the Army.

He spent two years in South Korea as a linguist. He returned to D.C., got a job and “accidentally” got involved in software development. He landed with Oracle, which, at the time, was in hyper growth mode—it was the early ‘90s—but left less than a year later with a co-worker to co-found Talus, a big data company in the terabyte age. In 1998, Talus sold to California-based Sagent, a pre-IPO software company.

“I had never thought about selling the company,” he says. “I was surprised. But we were young, and the company was less than five years years old. Back then, there wasn’t all this infrastructure around startups. There weren’t accelerators or anything like that. There was stuff going on in the Valley, in California. That was sort of an odd experience in Virginia.”

Venerable stayed until 2000 and took a job in New York before taking some time off a few years later to spend with his family.

Looking for a change of pace, he moved back to Cincinnati in 2005. He and his wife thought it would be a great place to raise their young children, close to family and in a region with big-city amenities but a small-town feel. The plan, he says, was to start another company. But in the process, he met Bob Coy, then CincyTech’s president and CEO. The rest is history.

Venerable joined the team as managing director in 2006. He stepped in as CEO, when Coy stepped down, in 2017. The job, he says, “was a cure for the disease.”

“It was a way to be a founder vicariously,” he says. “It’s not really what I expected to do. But after about three or four years of doing it, I told my wife, I feel like this is what I should be doing. It’s really highly addictive. It’s fulfilling. It’s about as intellectually stimulating as anything could be—when you’re baked into these companies, you become really passionate about what happens to them and focused and committed.”

That commitment has paid off in a big way, at least for the community. It’s one of the largest and most active seed funds in the Midwest. While CincyTech has invested $60 million into its regional portfolio companies, it says co-investment tops $900 million.

Its bread and butter are bioscience, health care, digital health and software, and, at press time, CincyTech had 36 active companies in its portfolio, including Enable Injections, IncludeHealth, Lisnr and Losant, an Internet of Things platform. Overall, it’s invested in 82 with 12 exits, meaning the companies were either acquired or went public (literally its biggest, Mason’s Assurex Health, a genetic testing company, garnered $307 million in 2016). Its portfolio companies employ about 1,200 people in the region with an average annual salary topping $84,000.

Still, the region needs more capital—much like the rest of the Midwest. That’s another popular theme. But, today, at least, “the city feels entirely differently,” Venerable says. “There are signs of progress and success.

“You’d be on Third Street, and it felt like living in a black and white movie. There were tumbleweeds blowing down the street. We just didn’t have as much going on, and I don’t think people were as organized. Today people are much more comfortable being in a startup, or working for a growth company. And we have an investor class now, a large part of which is locally [based], that is committed to these kind of growth opportunities, and that’s the most important thing.”

As for its headquarters at the 1819 Innovation Hub, CincyTech is settled in by now. It seemed to chase that opportunity much like it does new business ideas—CincyTech left downtown, for example, for Over-the-Rhine’s Union Hall in 2015 before opening its office here in February 2019. There’s plenty of energy inside, given that companies like Procter & Gamble and Kroger maintain corporate innovation spaces just steps away. And visions of bigger things to come, in more ways than one.

“When we were [downtown], I could see over into Kentucky. When they built the Banks, I couldn’t see it anymore. We moved to OTR, and there was nowhere to eat. Then lunch got too expensive. We like to be where we can imagine what it will look like in five years, and then it grows into that experience,” Venerable says. “We just felt like this is going to be the next place to pop.”