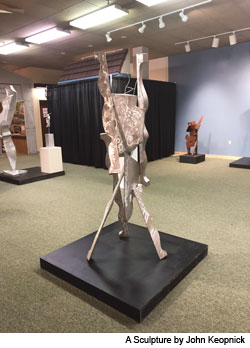 The Harmon Museum wanted to allow people to not only see physical things, but also think about the things that they were seeing. “We happened to have a couple of members that were art curators and they offered to come in and inventory our art collection,” says Van Harlingen. “We found out that we had an art collection that had a lot of the same artists that the Cincinnati Art Museum has on their walls.”

The museum decided to put a little more emphasis on its art. It decided to create gallery shows.

“A gallery show is when artists bring in their art and we set them up an exhibit,” says Van Harlingen. “We have an opening party and they can sell their work. People are able to see the whole museum and the work of these artists.”

The museum has seen an increase in visitors over the last few months due to the galleries.

“It’s worked very well,” says Van Harlingen. “We’ve seen an increase in visitors who just come to see the art and walk around and see the collection.” The museum is now booked with galleries until 2020. “A lot of people are really interested in being part of it,” says Van Harlingen.

Previous galleries have included Jim Delange, a blown-glass artist whose work is in the Dayton Art Institute; Mary Jean Weber, an oil painter; and John Koepnick, a sculptor. In September, the Harmon Museum will be showcasing Charley Harper and Edie Mckee’s work.

The final art gallery of 2018 will be photographs by Kelly Joslin, who was just accepted into the Metropolitan Museum of Art.

“This part of the country has so much great art in it,” says Van Harlingen.

The Warren County Historical Society has also made changes to its entrances.

“We have a nice big parking lot that people can park in and they can enter at ground level,” says Van Harlingen. Warren County Historical Society has been upgrading to make its location have universally accessible entrances since October. The only way into the building previously was by going up 18 steep steps. Now visitors are able to enter through ground level without taking any steps.

“We’re really excited that now everybody can get through the door,” she says.