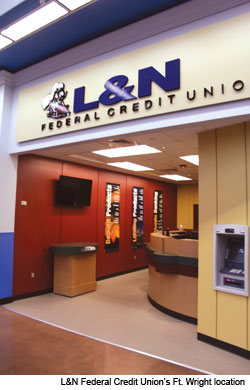 “We are the definition of locally owned and operated,” he says. That’s because L&N Federal Credit Union is a financial cooperative and therefore owned by its members, says Lewis.

Although many people think of credit unions as being operated exclusively for the benefit of employees of a specific company or associated groups, Lewis says in 2004 the credit union changed to a Community Charter. That means anyone who lives, works, worships, attends school or belongs to any legal entity in its service area is eligible to join.

L&N Federal Credit Union is a full-service financial institution that offers consumer loans, mortgage loans and commercial loans, he says. With assets of more than $1.1 billion and an array of products and services, L&N Federal Credit Union can offer everything necessary for someone’s personal or business finances. “We’re large enough to offer [loans] to the very small beginner to multimillion projects,” says Lewis.

That doesn’t mean the credit union is not going to continue to focus on consumer loans. “We are just as interested in helping members with their first car purchase or with their first mortgage or funding a multimillion real estate investment,” he says. “And we are diverse enough that we can do all of those things well.”

L&N Federal Credit Union has two branches in Northern Kentucky at 822 Donaldson Highway in Erlanger and 3450 Valley Plaza Parkway in Ft. Wright inside the Walmart store.

There’s also convenient online banking available for those on a personal computer, mobile phone or tablet device, says Lewis. “We actually have mobile check deposits so if you get a paycheck or a check from someone you can take a picture of it from that phone and make a deposit right there on the spot.”