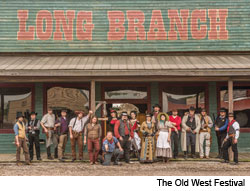 The Old West Festival in Williamsburg promises a day of fun and historyBy Jessica Baltzersen Dodge City, Kansas, in the 1870s was a lawless, gun slingin’ town made up of buffalo hunters, railroad workers, gamblers, drifters and good ol’ fashioned cowboys. In essence, it was the original western frontier from which we often derive our quintessential John Wayne movie references.

The city’s beginnings are said to have started in 1871, when a cattle rancher by the name of Henry J. Sitler built a three-room sod house near the Santa Fe Trail and the Arkansas River that helped him manage his expanding cattle operation. His home became a regular stopping point for many travelers and traders near Fort Dodge. A few short years later the town turned into a booming cattle trade industry and hub for wayward pioneers.

Today, the legend of Dodge City lives on through the Old West Festival, a re-created settlement modeled after the illustrious town. Established in 2007, Old West Festival takes visitors back in time to Dodge City’s western roots and frontier past with an annual fall festival located in Willamsburg, Ohio.

In the mid-1800s, westward expansion meant freedom. Americans were leaving the eastern homestead in hope of economic opportunities, upward mobility and independence. Old West Festival has successfully bottled up the heightened energy of these frenzied yet electrifying times and released its magic for modern Midwesterners, far from the western frontier, to experience and savor firsthand.

Other activities include a horseback riding show in Dodge House Arena, lasso and whip shows, magic shows, historical first-person storytelling, a variety of live musical acts, the Saloon Show with can-can dancing, a comedy show, scripted gunfights throughout the day and much more. Also new this year is the Old West Robbery escape room where visitors put their smarts and western wits to the test.

For the owner, Drew Deimling, Old West Festival is all about time spent with the family—an opportunity to step back in time, away from cell phones, tablets, movie screens and other distractions. “The essence of Old West Festival is about a simpler time—a nostalgic time. Our goal is to provide a full day of family fun so people can create memories that last a lifetime,” he says.

Deimling also founded Frontier Friends, a nonprofit organization with a mission to “foster hope, happiness, and healing for underprivileged children, children who have been victims of abuse, and children with life-threatening illnesses.” Through Old West Festival, 10,000 children and their families are given the opportunity to relive the Old West free of charge so those who might otherwise miss out can experience a full day of carefree fun.

Children can partake in the excitement through a ride on the A&A express train, panning for gold in the town’s mine, lassoing a steer or practicing their aim with beginner bow and arrow activities. They can choose to relive pioneer life by traveling the frontier in covered wagons, on ponies or horses.

Preservation of the Past

Aside from the entertainment and participatory elements of Dodge City’s arduous past, Old West Festival at its core provides the educational opportunity to learn and remember the cultural impact of America’s western frontier. The “Wild West” may have had a reputation for lawless, unfiltered mayhem but it straddled the line between barbarism and civilized progression toward a hopeful future—one that stretched America’s physical and economic boundaries.

Through Old West Festival’s revitalization of historical towns like Dodge City it’s not only an ode to the cool cowboy images of America’s past, or where we derived our pop culture phenomenon like GunSmoke or Clint Eastwood eye squints and famous one-liners, it’s a reminder to how we started out and how far we have come. It’s a reminder that saloons weren’t just for sing-a-longs and drinking, but a social hub for communication and even local politics. Or that trains and railroads weren’t merely a means for transportation but a significant symbol in the transformation of America’s agriculture, manufacturing and economic life during the time.

Visitors can also plan their visit during one of their many themed weekends like Women of the West, Halloween weekend and America’s Pastime weekend. For admission details and prices go to oldwestfestival.com.