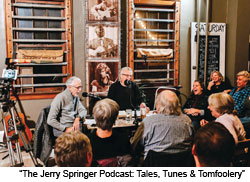 Podcasts aren’t just a national phenomenon—we’re making and listening to them here, tooDavid Lyman It’s The Age of the Podcast.

That may not have the ring of “The Age of Enlightenment.” Or even “The Age of Aquarius,” for that matter. But podcasts are in their infancy. The word itself isn’t even 15 years old. Give them a chance. They may just change the world.

Let’s step back for a second. If you are of a certain age, you may be a little uncertain about precisely what constitutes a podcast. The clinical definition—a digital audio file that can be downloaded from the internet or shared among friends—is pretty dry. It’s not completely clear, either, because that definition could just as easily describe music files, which are not actually regarded as podcasts. Generally speaking, podcasts are dominated by talk. Lots and lots of talk.

Some are stunningly amateurish. Others are masterfully produced. Some have only a handful of listeners, while others are heard by millions of people. The audience can be intensely local. Or it can be global. You can download a podcast and listen to it later. Or you can click “play” and listen right now.

Businesses love them because they are very inexpensive to produce and, if you know what you are doing, can have incredibly high impact. Or, like so much else on the internet, they can be a monumental waste of time.

No one is really sure how many podcasts are out there. Depending on who’s doing the counting, there are between 500,000 and 700,000 of them. The biggest of them are huge. According to Podtrac, which tracks such things, NPR—National Public Radio—is No. 1 on the list of top podcast publishers, with 19,119,000 unique monthly listeners. The New York Times is up there, too, as is ESPN. Other names on the list may be less familiar, things like Wondery, at No. 4. Or Barstool Sports, No. 9.

Locally, there is no shortage of commercial podcasts. There are loads of sports-related ones, mostly focusing on the usual suspects; the Reds (“Redleg Nation Radio”), Bengals (“Bengals Beat Podcast”) and FC Cincinnati (“Cincinnati Soccer Talk”). The Cincinnati Symphony Orchestra hosts a podcast, too (“Fanfare Cincinnati”), as do the Cincinnati Art Museum (“Art Palace”) and Great Parks of Hamilton County (“Take it Outdoors”).

But for my money, the very best of the local podcasts are the ones that are less institutional, the ones that ooze character and are filled with the sorts of personalities that give you a sense of just how diverse and quirky this community can be.

Here are a few that are worth listening to. If one doesn’t suit your taste, just move on to another—there are plenty to pick from.

In no particular order:

“Conversations with Kirk Sheppard” – By day, Sheppard is a clinical counselor. But the rest of the time, he assumes many different roles, from theater critic (The Sappy Critic) to semi-pro wrestler, standup comic, playwright and, now, as a podcaster. When he runs across someone interesting, he offers an invitation to his podcast and off they go. He’s a good interviewer. And he has a great radio voice as he probes the lives of wrestlers, comedians, playwrights, directors and, in my case—yes, I was a one-time guest—journalists.

“The Artfuls” – The stated goal of the podcast is to inform young professionals about arts events in Greater Cincinnati. And since the show’s three principals—executive producer Janet Chu and hosts Carlos García León and Jackson Short—are all graduate students in College-Conservatory of Music’s arts management program, they are solidly informed on the shows and issues they address. But because of their relative youth, they also bring a mix of optimism, naiveté, pompousness and new ideas to the mix. Be aware—some episodes can be very talky.

HereChannelRadio.com – This is a glorious hodgepodge of a site, providing a home for homeless podcasts. Click on “archives” and you’ll be introduced to a slew of intriguing offerings, from “Urban Orchards Organics” (hosted by Damon Lynch IV) and “The Vinyl Hour” (with Joe Morton) to “The Fun & Awesome Show,” hosted by a pair of elementary-age girls—Stacey Fun and Jane Awesome—who tell knock-knock jokes and sing funny songs. For Deadheads, you might want to click on “Dead in Cincinnati,” which has six episodes about Grateful Dead appearances in Cincinnati.

“April Eight” – Why should the grown-ups be the only ones with podcasts? Some adults may want to listen to this one. But really, this is focused on small kids. It is gentle and sweet and heartfelt and invites listeners to play and sing along at any time. April is a local singer/songwriter, educator and artistic will-o’-the-wisp. She has created 44 of these imaginative audio journeys for her listeners so far. You just hope she keeps it up.

“The Charlie Tonic Hour” – Technically, this probably shouldn’t be in the list because it recorded its last episode at the end of December. But podcasts live forever. And in the case of this one, they did 350 episodes before calling it quits, so there are hours and hours of shows that you can still find out there. The two hosts, Ginny Tonic and Charlie, talk and drink and then talk some more. And drink some more. They talk about food and distillers and bars and moonshine and almost anything alcohol-related. It is a credit to the two that even if you’re not particularly interested in alcohol, their discussions are often quite intriguing.

“UC Classics Ancient Worlds Podcast” – This is one of the more unexpected podcasts out there. But in the spirit of open communication, why not have a podcast about the classics? There are interviews with anthropologists and archaeologists. There are mini-dramas re-enacting aspects of the Dead Sea Scrolls. There are tales about local history. Truly, this podcast occupies a realm all its own. Three cheers to whoever conjured up this podcast.

“The Jerry Springer Podcast: Tales, Tunes and Tomfoolery” – Yep, this is the same Jerry Springer that had the outrageous TV show. And was one of Cincinnati’s mayors. So why should it surprise you that every week or so he and a couple of pals—professional pundit Jene Galvin and musician Maria Carrelli—should hole up in the back room of the Folk School Coffee Parlor in Ludlow, Kentucky, and start talking and singing and doing whatever suits them. Politics, both local and national, are in there, of course. But the range of subjects is surprisingly broad as three good friends hold court in front of a live, but usually very small, audience.

“Squirrel Stories” – Web developer Sean C. Davis’ show is billed as “the opposite of a swan song.” I’m not really sure what that means. But there is something oddly fascinating about the show, in which Davis’ guests discuss their most embarrassing moments. The result is often as awkward as it is fascinating. Sometimes, in fact, you get the sense that halfway through the recoding people start having regrets about opening up. A terrible thing, to be sure. But it makes for great listening.

There are many, many others out there. But there really isn’t enough room here in Cincy to hold them all.

A few others worth your consideration are:

– “King Records”, which is more a collection of King Records radio segments than strictly a podcast.