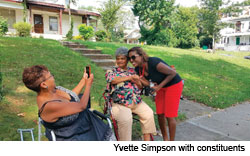 Ground game may be vital to winning Cincinnati mayor’s raceMike Boyer A good ground game is important not only in football but also in politics.

And the ground game—political parlance for the nitty-gritty of phone banks and door-to-door campaigning—may be critical in this fall’s Cincinnati mayoral election between incumbent John Cranley and challenger Councilwoman Yvette Simpson.

Simpson pulled a major surprise in the May Democratic primary by outpolling Cranley, 10,702 to 8,150. With a much smaller campaign war chest, she relied on door-to-door campaigning, while Cranley, who is seeking his second term as mayor, focused on TV and radio advertising.

“We all know the maximum impact you can have on changing a person’s vote is talking to them on their doorstep,” says Tim Burke, Hamilton County Democratic Party chairman.

“John recognizes he made some mistakes tactically in the primary. He had no field operation, but he does now and he’s out personally knocking on doors. It makes a heck of a lot of sense in a race like this.”

Gene Beaupre, a political scientist at Xavier University and a longtime observer of the local political scene, says “One of the things that makes this mayoral race interesting is that it will measure the campaign competency, if you will, of the candidates.”

Simpson finishing ahead of Cranley using door-to-door politicking, he says, “was sort of a reawakening for me. I started in politics with the ground game, and over the years, the money you spent on media became more important.”

But he says effective door-to-door campaigning has to be more sophisticated.

“You don’t want to waste time going to the wrong doors. You want to go to your base and identify the swing voters you want to reach,” he says. “It’s a time-consuming and labor-intensive effort.”

African-American voters represent better than 40 percent of the city’s population, but there’s no clear indication they’re leaning toward either Cranley or Simpson.

“There isn’t one overall African-American vote in Cincinnati,” says David Niven, a political science professor at the University of Cincinnati.

You don’t have to look further than Cincinnati City Council, he says. It includes African-American Democratic council members Simpson and Wendell Young, and independent in Chris Smitherman and Republican Charlie Winburn.

“What you see is a range of voices within Cincinnati’s African-American community,” he says.

Cincinnati’s political makeup is more diverse than nearby cities such as Columbus and Cleveland, Niven says, because historically it has had deep Republican Party roots and not the Democratic Party tradition of those cities.

“It’s reasonable to expect Yvette Simpson will have very strong support in the African-American community, but it won’t be unanimous,” Burke says.

He thinks Cranley will pull a significant number of votes from the black community because of his efforts to increase economic inclusion and women-owned businesses in city contracts among other things.

While the mayor has the advantage of incumbency in making his case to voters, Simpson has an edge by finishing first in the primary, Beaupre says.

“If nothing else she can go back to a larger base that’s already voted for her,” he says.

Nelson Pierce, field director for the Simpson campaign, says her campaign is focused on getting out her message to more voters between now and Nov. 7.

“Because of time constraints in the primary, there was a focus on reaching only people who were likely supporters,” he says.

“But now with a little more time and only one opponent [instead of two in the primary] we can focus on getting her message out as widely as possible.”

Simpson has only four part-time field staff members but has focused on expanding her team of volunteers who are out knocking on doors several days a week and every weekend, Pierce says.

“Our plan between now and Election Day is to touch people in all 52 city neighborhoods,” he says. The goal is to talk to about 40,000 likely voters.

“That doesn’t include leaving literature on doors,” he says. “We want to get 40,000 decent, quality engagements with people, be it a conversation on the phone, a knock on the door or a conversation at an event.” 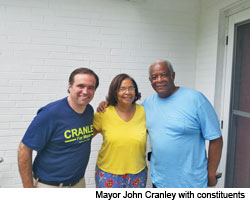 “We have a team of canvassers that go out in the neighborhoods every day knocking on doors and talking to voters. We’ve been doing that since mid-May,” Yungbluth says.

Although the number varies, it can be anywhere from a dozen to 20 people including interns, paid staff and volunteers.

“Since mid-May we have attempted to reach 50,000 voters on their doorstep,” she says. “We have targeted those who we think will vote in this race based on registration and voter history so we don’t knock on every single door.”

That effort ramped up after Labor Day, as the fall campaign season gets into full swing, she says.

“We’ll do more aggressive volunteer recruitment,” she says. “More people will want to get involved in the races once the traditional campaign season is under way.”

Cranley’s canvassers have already made one pass through the entire city.

“We likely get another full pass and then possibly another pass after that,” Yungbluth says. “Some people in the city will get three visits from our campaign.”

Who are the voters Cranley is pursuing?

“It’s a little bit of a secret sauce but I can say generally it is based on previous voting history and some other factors,” Yungbluth says.

“Our ground strategy is that we’re in every single neighborhood,” she says. “If you’re a likely voter, you’re just as important as any other likely voter.”