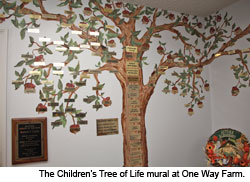 One Way Farm Children’s Home is a nonprofit organization in Fairfield that has been caring for abused, abandoned, neglected, and troubled youth and children with disabilities and developmental disabilities for 41 years, she says.

With Christmas approaching, Smith says everyone is welcome to help make the holiday season jolly for the kids at the home. “Whatever people’s gifts are or talents we like to just kind of think outside the box,” says Smith. “I invite everybody to just come for a tour here at the farm because I think that shows them better how they can get involved and how they can do their piece at what they’re good at.”

One woman, for example, comes with an acquaintance each year around Christmas and dresses as Santa and Mrs. Claus, says Smith. Santa listens to the children’s wishes while hot chocolate and cookies are served, she says.

The wishes are usually quite simple. “Our kids don’t request outlandish things like game systems or things like that,” says Smith. “They request like a nice sweatshirt or nice, decent shoes.”

For those who would like to provide those items the One Way Farm Children’s Home makes it easy, Smith says. People can take their kids’ Christmas list and buy one item off that list, she says.

Or churches or businesses can take a group of tags with the children’s wishes and people at those organizations can then choose to buy one of the items, says Smith. “I’ve had companies that are like, ‘Hey, we’re more of an engineering group, we just want a spreadsheet,’” Smith says. “And then people sign their name by what they pick up for you.”

Another popular way to help out the kids at One Way Farm Children’s Home is through the organization’s Angel Campaign, she says. People can pick one and then buy an item like a Kroger or Target gift card, says Smith.

Another possible gift for the Angel Campaign would be a gift card to go to the movies, she says. “If I can have a gift card so they can use it and then actually do the skill of actually going up there and saying. ‘One ticket please,’ I like to do that,” Smith says.

Another way to help the children at the home is to make meals, she says. “So even something as simple as providing a meal for our kids is super important,” Smith says. That’s because food is one of its largest costs, she says.

An organization can get together and make meals and bring them to the home, or the group can make meals and then freeze them, says Smith. “That way we’re able to utilize them throughout the year when we need them.”

Even donations of unwanted items around the home can be used in the home’s thrift store, she says. For more information on how to help call 829-3276 or go to onewayfarm.org, says Smith.