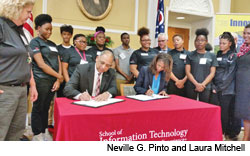 CPS, the state’s fastest-growing urban school district, says more and more students are opting to enter the workforce—and it has a plan to helpLiz Engel It’s a longtime ritual usually reserved for high school athletes committing to top college programs. But for seniors at Cincinnati Public Schools—including seven who graduated this spring as DHL employees thanks to a first-year, pilot program—so-called “signing days” have taken on a life of their own.

Not only are post-secondary decisions celebrated districtwide, but job commitments are now, too. It’s part of a growing trend as more and more students decide to directly enter the workforce after graduation.

The pilot with cargo giant DHL, for one, is part of a new career pathway program that’s expanding in the 2018-2019 school year. There’s still emphasis on college, too, and another recent partnership with Miami could fund the cost of college for up to 20 seniors this coming year. And there’s more.

“Preparing students for life is really our overall goal. Our world has become very, very competitive. Jobs are tougher to get,” Frances Russ, communications officer for Cincinnati Public Schools, says. “Our job is to help our kids secure those jobs, to help them become critical thinkers, to be ready to take the next step.”

The DHL program, which has received a bulk of the attention, included three components and two high schools, Oyler and Dater, in its inaugural run. First, Cincinnati State sent instructors to teach two introductory courses on logistics. Next, students were taught banking and financial literacy.

Then they went to work.

DHL offered students a paid co-op, in which they made upward of $13.50 an hour working at least 10 hours a week. And DHL helped eliminate another huge barrier for students—transportation—providing rides both to and from its hub at the Cincinnati/Northern Kentucky International Airport. CPS is developing other partnerships that will help students obtain their own vehicles at a low cost—along with instruction on how to maintain them.

Brittney Cousins, CPS’ career based learning manager, calls it a win-win. DHL has been steadily expanding—and hiring locally—for years. Of the 17 CPS students who participated in the program, seven are now full- or part-time employees.

“I think the students were amazed by the depth and the breadth of this field,” Cousins says. “We [as a district] learned we need to continue to provide exploration opportunities for our students, particularly working in an urban setting. I think it’s underestimated the lack of social capital our kids may have. If we don’t expose them to the variety of careers that exist, they’ll only apply for things that they know.”

This coming year, CPS will expand the program to include more business partners and six high schools—Dater, Oyler, Woodward, Western Hills, Taft and another still to be determined—and will offer five additional career clusters, including manufacturing (multiple companies), hospitality/tourism (Cincinnati USA Institute for Hospitality Leadership), public safety (Cincinnati Fire Department), automotive services (Superior) and cybersecurity (Belcan). Each will average 20-25 students; Cousins expects 75-100 to participate overall.
She admits it’s a significant ramp up but says officials have spent months planning and preparing. The goal is to create a workforce pipeline; each sector is experiencing some kind of shortage. And it’s about more than just a job for grads—it’s a career.

“Sometimes it’s negatively looked upon [going straight into the workforce],” Cousins says. “It’s, ‘Oh, you’re not smart enough to go to college,’ or, ‘You don’t have the money.’ But in all actuality, [these students] sometimes end up with less debt; they end up with better paying jobs, and climb the ladder faster. We know from the business world that you have to go back to school for a lot of the management positions, but why not use that system to prepare you while also getting the experience you need?”

For students who choose to attend college, CPS is also stressing readiness. While 93 percent declared some pathway—whether to “enroll, enlist or employ”—roughly 60 percent of CPS grads commit to college. Kayla Ritter Rickels joined the district in October as its college manager, a newly created position. She’s working on several partnerships with nearby universities, including:

1. Cincinnati Scholars, a pilot with Miami University, for 2017-2018. In the partnership, Miami agreed to sponsor up to 10 men involved in the CPS MORE, a peer leadership program—with full-cost scholarships. Five accepted the opportunity.

Rickels says Miami has since increased its commitment. It will now extend the offer to up to 10 men and 10 women. The scholarships cover not just tuition, but room and board, books and more.
It’s an exclusive partnership with CPS; the goal is to increase diversity on the Oxford campus.

“It’s a really awesome opportunity,” Rickels says. “Miami carries a brand name that could feel intimidating to many of our students. It really shows a huge commitment on their part. And we expect that relationship to continue indefinitely.”

2. CPS is partnering with Miami’s College of Education to create a pipeline of teachers.

The program, which starts this fall, targets eighth- and ninth-graders at Aiken High School. The first year will include a variety of out-of-building experiences to expose students to teaching as a career. After, students can enroll in college courses. The program could ultimately lead to an automatic acceptance to Miami with “robust scholarship” opportunities as well, Rickels says.

“We know that education is the career students are most exposed to, yet our students are not choosing to be teachers,” she adds. “So [we thought], ‘How can we thoughtfully partner with our colleges and meet the teaching need?’ Because there’s certainly a gap there.”

3. And CPS is expanding its IT pipeline. In a partnership with the University of Cincinnati, students, starting in ninth grade, can start IT college coursework. If they complete the program and earn at least a C in every course, they’re automatically a Bearcat—with their first full year of college complete.

Last school year, the program was offered to 30 ninth-graders at Hughes, but it will be expanded to 90 ninth-graders in the fall at Shroder and Clark schools, too.

CPS was the first site for the program, but Rickels says the model has expanded to over 14 districts in the state.

“It’s a way for students to expedite through the program and really experience if IT is for them,” she says. “This is the best place to do that.”

Additionally, Rickels says CPS is planning its first districtwide college night in October, which will include a college fair, information sessions for families and a FAFSA completion lab. The idea, again, is exposure.

“A good chunk of our students that go to college go to one of two institutions: UC or Cincinnati State,” Rickels says. “Both are great, but we want our students to know there are other opportunities, so they pick the best fit. As a large urban [district], we are a strong recruitment ground for colleges. They want our students, and so we have a real opportunity there.”

And the work is certainly not complete. Both Cousins and Rickels will continue to develop and formalize partnerships this coming year. And they want to work more and more with families—preparing them, too, for life after high school.

“It means something completely different to be a parent of a college student or an employed student,” Rickels says. “…When a student goes to college [for example], the whole family goes to college, and we really need to be thoughtful about what that means.”

Ultimately, both see their roles pulling younger and younger. For example, working with sixth-graders on their transition to high school—and beyond.

“Our kindergartners right now—their jobs may not exist,” Cousins says. “Traditionally, education systems are behind, so we want to make sure we’re continuing to prepare [students] for careers of the future.”