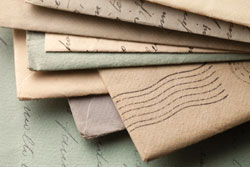 Don Mooney takes in the wisdom of the letters his father wrote during WWIIDon Mooney Had enough of the #COVCATHKIDS?

After that first wave of instant cyber vilification, the knee jerk counter-narrative has been equally insufferable.

My quick take: Put aside knee-jerk conclusions based on MAGA headgear. The videos show an unruly teenaged gaggle. One student is stripped to the waist, others are tomahawk chopping and hopping with maniacal zeal. In my Catholic school days, such antics would have earned a black mark opposite the line labeled “fails to exercise self control.” Catholic school discipline may not be what it used to be.

I’d rather write about another teenager, an Army private whose prolific letters home from 1945-46 recently showed up in a stuffed carton at my door. Dog-eared and fading, they bear the recognizable scrawl of my 19-year-old father on fragile, translucent pages. Some bear the stamp of U.S. Navy censors as my Dad crossed the Pacific in the summer of ’45, bound for a looming invasion of Japan. Others were postmarked from Fort Dix, New Jersey; Camp Blanding, Florida; Fort Ord, California; and, finally, “Tokio” (spelling was never his strong suit), where Dad served as an M.P. (military police) during the post-war occupation.

Those letters to Ma and Pa provide a unique perspective on teen life in Dad’s day.

Dad reported on the challenges of basic training, but also was frank about one timeless teen preoccupation:

March 19, 1945 – Camp Blanding – “I got a pass, and got to town for a couple dances and to say the least the Army has landed and the situation is well in hand … I met a blonde young and cute schoolteacher. She teaches fourth grade. I took her out to the beach Sunday afternoon and really had a swell time.”

Dad’s family was devoutly Catholic. His letters talk about serving mass, and his work with a Catholic chaplain in Japan to find Japanese nuns a fitting home.

March 31, 1945: “Easter is a funny time, not so great a day in the eyes of children as Christmas but the greatest of days in the eyes of the Church. New clothes, flowers and spring. That’s Easter to a 120 million Americans … whether Catholic or Protestant, and that’s what this war is all about.”

Of course, there were complaints about daily life, including slow mail delivery, spotty food and pricey Tokyo beers. Yet Dad took well to Army life.

April 11, 1945: “The best thing about being in service is it teachers you not to … always think about yourself. No matter how sick or tired you get, you keep going.”

But the letter that resonated most in light of the #COVCATH controversy contained a lesson about tolerance, with some words that now might offend:

August 7, 1945 – At Sea – “I was reading in the Reader’s Digest where a Jap[anese]-American soldier, wearing the purple heart…. was thrown out of a barber shop in California because he was a Jap. From what I saw of the Jap[anese] soldiers in Florida, and have read about [the Japanese] regiment in Italy, they’ve certainly done alright for themselves and should be doing the kicking out. It’s the same way with negros (sic). There’s one sleeping right next to where I’m writing this, and we play cards with a couple in the afternoon. There’s going to be a lot less of this race hating, on the part of service men anyway, once the war is over. That’s one good thing anyway…”

Maybe my Dad’s generation was forced by war and depression to grow up too fast. Maybe it’s anachronistic to expect our schools to teach today’s teens discipline, sacrifice for the common good and tolerance of others. But at least teach them that whatever they do, someone may capture it all on video and post it on Twitter.