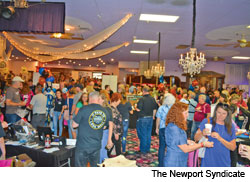 The Newport Syndicate was the city of Newport’s first “golden business,” Forton says. “We were here before Newport on the Levee,” she says.

The Newport Syndicate is the perfect place for wedding ceremonies, receptions, reunions and social events, Forton says. The wedding business is The Syndicate’s No. 1 market, she says.

The Syndicate is perfect for wedding ceremonies and receptions because both can be conducted in the same facility, Forton says. A wide choice of spaces is available so couples can have an intimate ceremony in the Flamingo Room or a big ceremony in the same space as the reception.

The facility offers the perfect recipe for wedding receptions, Forton says. Packages include food, a four-hour bar package, cake cutting and plating, fine china and glassware, room setup and cleanup, linens, chair covers, late-night weddings (until 2 a.m.), late-night food and an event planner at every step in the process.

Great food has always been the cornerstone of The Syndicate’s business, says Forton. “We started it with that fine dining flair that we’ve never lost,” she says. “We get more compliments on our food than anything else we do when it comes to banquets. So that part I think is what’s sustained us all these years. That attention to good food.”

Right behind the wedding business is hosting fundraisers, Forton says. That’s because The Syndicate has such a large space to handle big groups, she says. “We can have a silent auction and have room for everything they need to make a lot of money.”

Some of the largest names in fundraising have conducted their events at The Syndicate, including the Arthritis Foundation, the Northern Kentucky Homeless and Housing Coalition, the American Cancer Society, the Alzheimer’s Association and Dance With Your Heart.

“We’ve probably done a fundraiser with most of the large fundraisers in the city in the past 25 years,” she says. To help them make money the facility offers special fundraiser pricing for the nonprofit groups, she says.

“The chances with making a lot of money here at The Syndicate are good because the product is good, the people leave happy, the space is good, the food is good,” says Forton. “All that helps the fundraisers to make money.”

The Syndicate is a popular venue for corporate events because the facility offers privacy and the option of a large space or smaller rooms for companies to use, Forton says.

The Syndicate is also a popular venue for social events like proms, sorority or fraternity formals, bar mitzvahs, bat mitzvahs, reunions or family parties, she says. The facility has seven party rooms that can accommodate any size event, including two of the largest dance floors in the Tristate, Forton says.

The Syndicate also has the only dueling piano bar, Gangsters, in the Tristate area. “We run it every Saturday night and it’s great for all ages [21 and up],” says Forton. “What’s so cool about it is it runs the gamut from 21-year-olds to 75-year-olds,” she says.

Gangsters is the youngster of The Syndicate’s business. It started over 10 years ago, which is unusual for a piano bar to last so long, says Forton. “It’s just weathered a lot of things and it’s consistent in what we offer and that’s the secret to staying in business so long,” she says.

Part of its longevity can be credited to the entertainment value it offers, says Forton. “It has a fun menu and it’s entertaining,” she says. “People come to Gangsters and then they end up staying like two or three more hours.”

Gangsters is a great place for a bachelorette party or birthday party, she says. “It’s like one of the spots you can put on your to-do list where you know if you come in you’re going to have fun.”

And having fun is really what has sustained The Syndicate’s business model for the past 25 years. “People just want to have fun,” says Forton. “We’re always at people’s happiest day.”