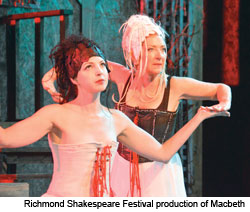 Richmond, Indiana, has created its own Shakespeare festival to celebrate theater and the Bard’s work
David Lyman

Lorijo Metz was skeptical when she moved to Richmond, Indiana, from Chicago in 2013.

It’s not that she thought Chicago was the center of the universe. But she and her husband liked good restaurants. And good theater. And being around smart people who were actively involved in the world around them.

She wasn’t certain that she would find all of that in Richmond.

But one Sunday afternoon soon after she got to town, she and her husband were looking for something to do and wandered into Richmond’s Two Sisters bookstore. They found a well-stocked independent bookshop, which was a plus. But they also found a group of people who had gathered to read a Shakespeare play. They decided to join them.

“We were not Shakespeare people,” recalls Metz, an all-around computer whiz by trade. “But we had such a good time. And they were such nice people.”

When Metz discovered that these nice people met every Sunday in an effort to read all of Shakespeare’s plays, she decided to return the next week. And the next. And the next.

Little did she know, she had stepped into what would very soon morph into the Richmond Shakespeare Festival.

The group had been inspired by a Richmond Civic Theatre production of The Tempest to benefit its studio theater program.

“In the process of doing that it became clear to us that people were genuinely interested in Shakespeare,” says Richmond businessman Ray Ontko. “And it became clear that it was possible to do a quality production with the resources we had available here in town.”

So they started meeting at the bookstore to explore Shakespeare a little deeper. And when that was a success, they looked for a next step.

A year later, the Richmond Shakespeare Festival was born. They staged two plays that first season. Combined, Romeo and Juliet and Much Ado About Nothing attracted roughly 800 people. Not bad. So they did it again the following summer. A Midsummer Night’s Dream and Titus Andronicus drew 950. The festival has been growing ever since.

This year’s festival kicks off June 21 with a production of The Tempest. The next night, Hamlet opens and the two run in repertory through July 6.

“In some ways, things have changed radically since then,” says Patrick Flick, the festival’s producing artistic director. “But in other ways, we are still the same community-driven theater. The people of Richmond want this theater. And they support it, both as ticket buyers and volunteers. That depth of community involvement is why we exist.”

When you stop and think about it, there is no better reason for any group to exist. People want it. People support it. People get involved with it. The result, for the RSF, is a theater that is far more robust that anyone had imagined back in 2013.

Despite the success, they haven’t lost that community feel. Much of the board is made up of people who have been there since the beginning. And even though many of the actors in today’s productions are professionals, there are gifted non-professional actors who are part of the mix as well. The theater draws much of its technical staff from nearby Earlham College, which also houses actors and provides rehearsal space.

But what really sets the RSF experience apart is its theater. They probably could have finagled their way onto the stage of the beautifully restored 110-year-old Murray Theatre in downtown Richmond. But the extraordinarily active Richmond Civic Theatre keeps the building busy much of the year. Besides, the RSF wanted an identity all its own.

They found it in the historic Starr-Gennett building, tucked away in the city’s Whitewater Valley Gorge Park. In the early part of last century, it was part of a complex of buildings that was home to the Starr Piano Company. Later, it also was home to a Starr subsidiary, Gennett Records, which specialized in recording early jazz stars like Duke Ellington, Jelly Roll Morton, Hoagy Carmichael and Zack Whyte and his Chocolate Beau Brummels.

But when the company folded, the complex fell into disuse. Most of the buildings were leveled.

“Growing up, I remember the factory,” says Patricia “Patty” Glen, the co-owner of the Two Sisters bookstore and an RSF board member. “It was a ruins. Not a cool place to go. It was trashed. There was graffiti everywhere.”

But the city decided to preserve this one remnant of the complex’s glory days. It would be a place that could host all manner of events, from weddings and large parties to, finally, the Richmond Shakespeare Festival.

It has proven to be something of a blank slate for the theater’s designers to work with. It’s a rustic building, a massive open hall. There is a roof—a tin one, that can necessitate briefly pausing a show in the event of heavy rain. There are walls, too. But this is not a finely finished facility. The towering windows that once provided natural light for factory workers are devoid of glass now. So the theater has the feeling of being in the open air, a little like a Greek amphitheater, except that it’s covered. And it houses handsome, fully staged theater productions.

“We knew that doing this was an audacious goal,” says Ontko. “But as we looked around, we realized that some of the best-known Shakespeare festivals were in small towns like ours.”

“They’re all off the beaten path,” says Ontko. “I thought, ‘Why not us? Why not Richmond?’”