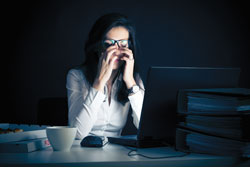 Local experts recommend short breaks from the computer to prevent eyestrain and vision problemsDeborah Rutledge Ever wonder whether staring at your computer for the bulk of your workday is hurting your vision, or if the blue light emanating from the screen is any cause for concern?

Actually, although eyes might start to feel scratchy or blurry after prolonged exposure to screens, it “has zero bearing on glasses prescriptions,” says Dr. Edward Meier, from Apex Eye.

Vision blurs anytime we stare at one thing, but the effects are usually not permanent for adults, says Dr. Kevin Corcoran, director of optometric services at Cincinnati Eye Institute and private practitioner at Innovative Vision in Montgomery. There is concern for the risk of near-sightedness for children who are involved in prolonged near-focus tasks.

Corcoran tells his patients to take breaks every half hour to defocus and give their eyes a chance to relax.

Those uncomfortable symptoms—including eyestrain, headaches and neck and shoulder pain—may indicate Computer Vision Syndrome, also called Digital Eye Strain. Much of the eye discomfort comes from not blinking, which deprives the cornea of the nutrients and oxygen it needs, Meier says.

One solution is following a 20-20-20 plan, meaning every 20 minutes taking a 20-second break to look at something 20 feet away, he says, adding that the strategy is a good one for reading books, too.

Dr. Alex Gibberman, an optometrist at Harper’s Point Eye Care, adds, “Screens, phones and books alike all increase our use of our accommodative muscles, which in turn can lead to headaches, fatigue and eventually mild shifts in our vision in the near-sighted direction.

“There are easy direct correlations here but I will be interested to see what larger and more long-term studies find with blue light going forward,” Gibberman says. “I would argue that the main issue with screen use is the increase in dry eye symptoms—among other things, we blink a whole lot less while staring at screens; blink rates are essentially chopped in half.”

And, unlike looking down to read paper text with the eyelid partially closed, the eyelid is open when looking at an eye-level computer screen, which adds to the dry eye effect, Meier says.

When it comes to blue light’s effects on vision, the jury is still out.

“My thoughts are that blue light may indeed play a role in affecting vision but likely not much in the short term,” Gibberman says. “It will be awhile before the long-term effects of blue light are known, mainly because there are so many other things affecting our eyesight.”

Blue light is a high energy, short wavelength light compared with red, orange or yellow. The biggest source of blue light is the sun, but while harmful effects of over-exposure to the ultraviolet light from the sun are known to increase the risk of certain eye diseases, less is known about blue light.

“There have been various small and short-term studies showing the different potential effects of blue light, and not all are bad,” Gibberman says. “Blue light increases alertness and is important for eye development in childhood, although over-exposure in childhood has been linked to increased amounts of nearsightedness.”

Blue light has also been used to treat some skin conditions such as psoriasis and acne, Corcoran says.

But more widely known findings have suggested circadian rhythms are negatively affected by blue light at bedtime, suppressing the normal release of melatonin that is important for sleep. In one study, people using tablets with LED screens at bedtime took longer to fall asleep than those who read text on paper, Gibberman says.

“These are some of the potential issues,” including the idea that blue light may be involved in the cell death of the macula, which is the part of the retina responsible for central and detailed vision, Gibberman says. “However all studies mentioned are either retrospective or short-term; it will be many years before the long-term effects are truly understood.”

When it comes to eye health, other factors play a part, such as smoking, which increases the risk of damaging the macula and developing macular degeneration, Corcoran says.

“It’s a fascinating, complex area of study,” he says, adding that researchers can do large epidemiologic studies of the effects of blue light on the body as a whole, paving the way for protective recommendations.

Among those recommendations are eating well and getting enough leafy greens and antioxidants to quell inflammation, which can cause a host of systemic problems, Corcoran says.

“There are an immense number of variables when it comes to environmental factors contributing to changes in vision,” Gibberman says. “It will be many years before we truly understand the sole effects of blue light but I think it’s fair to say that at the very least, it plays a role.

“How big a role is yet to be determined.”