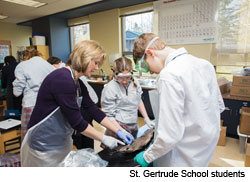 One such program is the school’s household system. “From second though eighth grade, you’re in a household and you stay in that household [throughout your time at St. Gertrude],” says Sister Mary Aquinas, principal. The households consist of 14-16 students and a faculty adviser, and they meet twice a month.

Originally started to create more of a family feel throughout the school, the households have also provided leadership opportunities to eighth-graders.

“Your eighth-grade leaders lead community-building activities, they talk about the saints of the month or the virtue of the month,” says Sister Mary Aquinas. “They pray together, have fun together and it’s a way to know kids across the grade levels.” Sister Mary Aquinas says that students often start their eighth-grade year feeling uncomfortable with their leadership responsibility, but they grow into the role and gain confidence as the year progresses.

Another way St. Gertrude looks to build its students knowledge is with its science classes.

“Our hands-on science is pretty darn good,” says Sister Mary Aquinas. In younger grades, that means learning about the outdoors with the school’s garden and apple trees.

Students also assist in taking care of the school’s chickens. “Every year we incubate eggs and hatch chickens and then the chickens lay eggs for us,” she says.

The students participate in dissections starting in sixth grade. “They do bullfrogs in sixth grade, they do sharks in seventh grade and then in eighth grade they actually do fetal pigs,” says Sister Mary Aquinas. “From what I’m told, we’re doing high school-level dissections at the junior high level because of our amazing science teacher and the parent support.”

“It keeps getting bigger every year,” says Sister Mary Aquinas.

In addition to providing students with strong educational and artistic foundations, St. Gertrude also focuses on strengthening the students’ religious beliefs. The Dominicans, who are strongly founded in study, preaching and truth, founded the Roman Catholic school.

A novitiate house (a house for Dominican brothers in training) is located on the school’s campus, so students are used to seeing religious men and women throughout the day. Sister Mary Aquinas and other brothers and sisters at the school are seen dressed in full habit at all times.

This religious presence is reinforced with religion class, incorporating religion into other topics and religious discussions in the households.

“[Students] have a good sense of why the church teaches what it teaches and they can defend that,” says Sister Mary Aquinas.