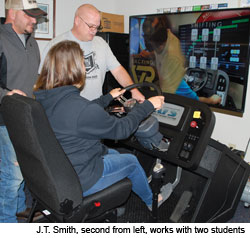 After a four-week training program that cost about $5,000 to complete, a smart, hard-working young lady left a minimum-wage job—and landed one that paid $60,000 the first year. By her second year, she was earning upwards of $100,000.

“There are so many success stories like that one,” says J.T. Smith, director and training manager for the Truck Driving Academy at Southern State Community College. “Everyone who completes the program and gets a commercial driver license can get a job right away if they want one; they can start out in a $50,000-a-year job in the blink of an eye. I don’t think there are many other types of work that can do that for you.”

People who once wouldn’t have even considered truck driving as a career might now give it a second look, Smith says, considering the opportunities now available. Upwards of 50,000 trucking jobs need to be filled nationally—a shortfall expected to increase as older truckers continue to reach retirement age. The trucking industry needs 890,000 new drivers to keep pace with demand during the next 10 years, the American Trucking Associations reported, and employers are luring new drivers with pumped-up pay and fringe benefits.

Programs such as the one offered by Southern State—at locations in Clinton, Gallia, Jackson, Lawrence and Pike counties—are helping to fill the gap.

Among about 40 Ohio truck-driving programs, Southern State’s academy is one of the state’s longest running and most reputable, Smith says. In operation nearly two decades, the Southern State program has trained about 6,500 students.

That’s one way Southern State ensures its trucking graduates are well prepared for new careers behind the wheel. Some schools promising quick completion of state-required exams offer mostly classroom time and little behind-the-wheel training, Smith says. At Southern State, students spend the bulk of their time learning to drive via computer simulators and in an actual 18-wheeler. Training for passenger-bus drivers is less extensive; tuition and fees for that two-week program runs $900. Training for truck-driving tops out at $5,300 for a four-week program; shorter, lower-cost programs are offered for licenses that limit the types of vehicles a student is authorized to drive. Smith says most people would be hard-pressed to name another type of training that can launch a new career at a lower cost in such a short time.

Smith, who has four decades of experience in trucking, says the industry has been gaining respect but remains misunderstood somewhat.

Driving a truck is more complicated than most people imagine, he says. For example, pre-trip inspections require students to have knowledge of 90 different items.

Another misconception: truck drivers don’t always spend long periods away from their families; there are many different types of trucking jobs, including ones limited to local routes.

Because of the opportunities and benefits available, trucking is attracting a wide array of people, such as retired airline pilots, nurses and people whose jobs were eliminated because of technological advances in their fields, Smith says. Southern State has trained students ages 18 to 70.

In a testimonial posted on the program’s website, alumna Cierra Walker said she obtained two jobs in trucking—one full-time and one part-time, after completing the program. She recommends Southern State’s program because: “The teachers are there to help you when you need it, both in class and on the road … The door is always open for you there.”