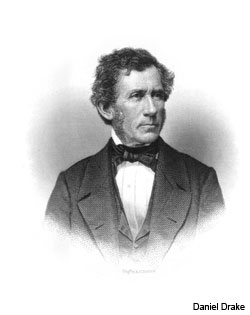 The man credited with starting the University of Cincinnati reminds us that even extraordinary leaders are humanDan Hurley The University of Cincinnati, one of the region’s oldest anchor institutions, will celebrate the 200th anniversary of its founding throughout 2019. The contributions of the university over the last two centuries are numerous, and in some instances transformative, including co-op education by Dean Herman Schneider in 1906 and the oral polio vaccine by Dr. Albert Sabin in the late 1950s.

The recent dedication of the 1819 Innovation Hub in Avondale announces the university’s commitment to leading future transformative change, but also recalls its roots in 1819. It was in that year that Dr. Daniel Drake founded the Medical College of Ohio, the first building block in the foundation that became UC.

In the first half of the 19th century no one living in Cincinnati provided greater leadership than Daniel Drake. He was prolific as a writer of hundreds of books, tracts and essays about his scientific observations, disease and medical treatments.

But Drake also wrote and spoke out about education reform and social issues. He supported the goals of the temperance crusaders, not for moral reasons, but because of the medical implication of intemperance—morning vomiting, excessive secretion of bile in the liver, an offensive discharge of phlegm, epileptic convulsions and an aggravation of consumption (TB). He even speculated that intemperance predisposed the body to “spontaneous combustion.”

Before a chamber of commerce existed to systematically brag about the real and imagined wonders of the region, Drake was one of Cincinnati’s early boosters, publishing his Natural and Statistical View or Pictures of Cincinnati and the Miami Country in 1815.

Drake was also an institution builder. Besides the Medical College, he helped found the city’s first circulating library, and two of the anchors of the modern Cincinnati Museum Center, the Western Museum (Natural History Museum) and the Historical and Philosophical Society. Taken together, these accomplishments won Drake the nickname the “Benjamin Franklin of the West.”

Growing up on the Kentucky frontier, Drake attended school for only six months before being apprenticed at age 15 for four years to Cincinnati physician Dr. William Goforth. He later attended the medical school at the University of Pennsylvania and practiced medicine for almost a decade before accepting a teaching position at Transylvania College in 1816. Upon returning to Cincinnati, Drake became the prime mover behind the establishment of the Ohio Medical College in 1819 (which was later incorporated into the modern University of Cincinnati) and served as its first president.

Normally, medical students in the 1830s attended lectures in anatomy, physiology, pathology, therapeutics and operative surgery, but were provided few opportunities for clinical experiences. Drake, however, insisted that his students learn to diagnose patients at the bedside under the direction of an experienced physician, which, in turn, spurred him to lead the founding of Ohio’s first public hospital, the 150-bed Commercial Hospital and Lunatic Asylum.

Faced with a talent so diverse and accomplished, it is easy to think of Drake as a great man while ignoring his human flaws and limitations. That would be a mistake.

Despite all his natural talents and skills, Drake was a difficult person. One colleague described him as someone for whom “artful silence was foreign.” He had stormy relationships with colleagues almost everywhere he worked, sometimes spilling over into bitter exchanges of letters in the newspapers and occasionally resulting in physical fights.

At times, Drake was operating at the outer margins of science and medicine for his day and a true reformer in the field of education. It would be easy to assume that being forward thinking in so many areas meant he was also on the right side of history in other critical areas.

Against the backdrop of increasingly angry divisions over slavery, in 1851 Daniel Drake wrote a series of letters on slavery, colonization and abolition for the National Intelligencer. He blamed abolitionists, who he described as “an enemy of humanity and a traitor to his brother,” for the growing divide.

For Drake, the problem with abolishing slavery and freeing the slaves was that America did not need the “African population” which was by nature a “serving people, parasitic to the white man,” who “according to the instinct, feeling, and opinion of the immense majority of our people, they are, and should be kept, a distinct and subordinate caste.”

The accomplishments of Daniel Drake, the unwitting founder of the University of Cincinnati, are substantial. But for those interested in the study of leadership, he is a reminder that humans, even great ones, are complex and often contradictory. They can be both great leaders and have a combative personality on the one hand and hold both progressive and regressive social attitudes at the same time.

Dan Hurley is a local historian and president of Applied History Associates, which works with museums in the Eastern U.S.