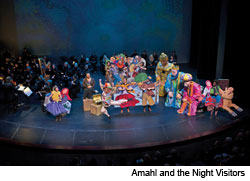 It’s like the underappreciated middle sibling: steady and reliable and given to outbursts of remarkable creativity. Take CCO’s Summermusik program, for instance. The programing is imaginative, the musicianship is superb. It is arguably the most entertaining three weeks on the classical music calendar.

This time of year, though, is always a dilemma for these mid-sized organizations. For the big guys, trotting out holiday programming is a no-brainer. On Nov. 21, the Playhouse in the Park opens A Christmas Carol for the 28th consecutive season. And the Cincinnati Ballet has performed The Nutcracker annually since 1974.

Why? They’re profitable, that’s why. By Cincinnati Ballet’s reckoning, Nutcracker accounts for more than 50 percent of the entire season’s ticket revenues.

But they do more than make money. They bond an organization to the community around it. And they help define an institution’s brand. More often than not, when people think of Cincinnati Ballet, they think Nutcracker.

But CCO didn’t have anything like that. It’s difficult for these medium-sized groups to compete. Big shows are wildly expensive to stage and promote. But without all of that, it’s easy to get lost in the holiday shuffle.

Still, CCO was convinced that there must be something out there that would suit them. Staging something as splashy as Nutcracker would be out of character for them. And the Broadway stars that appear in the Cincinnati Pops’ holiday shows were beyond their budget.

They had a handful of criteria. It had to carry a modest price tag. It had to be appealing to families. They wanted something warm, but not necessarily fuzzy. And above all, it had to meet the high musical standards they set for themselves.

In 2012, they found it—Amahl and the Night Visitors.

Created for the NBC television network by composer Gian Carlo Menotti in 1951, Amahl is a modest and gentle piece. It has just six characters, which meant it would be easy on the budget. And it lasts just 50 minutes, meaning that most kids would be able to sit still long enough to enjoy it.

And it is, most definitely, filled with the holiday spirit. It tells the story of an encounter between a disabled boy and three kings who are following a star to pay homage to a child they believe to be the son of God.

This is no Christmas pageant, mind you. It is a refined work of musical art. But there is plenty of action: dancers, soloists, a chorus and an orchestra. And there are puppets. Gigantic ones, standing more than 10 feet tall, with features so exaggerated that it’s hard to look away from them.

They are breathtaking. And they are a large part of what makes Amahl such a compelling experience for young audience members.

“You have to remember that for some of the kids in the audience, this may be the first live show they have ever seen,” says Dylan Shelton, artistic director of Madcap Puppets, the group responsible for the puppets and the actors who work inside them. Shelton is also the director of the production, and he is acutely aware of the importance that these first exposures to performances can have on young audience members.

“So much of what they see now is on screens,” says Shelton. “This is our chance to show them how different the live theater experience can be.”

The wonderment of it all isn’t lost on older audience members, either.

Kim Popa, the executive director and co-founder of Pones Inc., brought her 90-plus-year-old grandmother to see the production two years ago. Popa is the show’s choreographer and is one of several Pones Inc. company members who perform in Amahl.

“Nothing really wows her anymore,” says Popa. “But Amahl was not what she expected. She knew she was going to see a one-act opera. But when you say ‘opera’ people have such different expectations. ‘I loved that—it was perfect,’ she said.”

And, in many ways, it is. An enchanting story. Masterful music. And, for CCO, it’s a chance to indulge in the sorts of collaborations that have become a hallmark of their work.

“Collaborations have been really important for us,” says CCO general manager LeAnne Anklin. “We’re constantly looking for ways to enhance our performances. And we like to think outside the box.”

As a result, they’ve collaborated with all manner of groups, from the Drake Planetarium to a bagpiper, from local microbreweries to English Country Dancers.

“We’re very lucky,” says Anklin. “We’ve partnered with fabulous organizations. I think Cincinnati arts groups are ready to collaborate. And fortunately, Cincinnati audiences are ready to see what we can create together.”