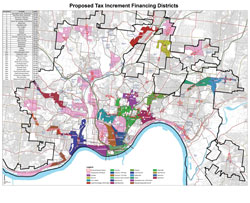 It sure seemed so if you watched City Council create Tax Increment Financing (TIF) in 15 more city neighborhoods at the end of 2019.

What’s a TIF? Local politicians know that voters just hate tax increases for generic governmental purposes. So they load up the ballot each election year with designated levies that warm-hearted voters just can’t resist. Cincinnati taxpayers have approved real estate tax levies for all sorts of tear-jerking causes: child, family and senior services, indigent health care, developmental disabilities, libraries, schools and more. A TIF allows the city to exploit all that voter generosity by skimming tax dollars from those benevolent levies and use the “booty” for a variety of projects voters never approved.

As explained by Deputy City Solicitor Luke Blocher at a recent council hearing, a TIF designation allows the city to “capture” any increase in real estate taxes paid on property in a TIF district. That captured revenue can be spent as City Council decides.

What does that mean if you live in a TIF District? You generously voted to raise your real estate taxes to pay for schools, or children services. When County Auditor Dusty Rhodes decides that the value of your house increased, your tax bill increases. But the increase in taxes doesn’t go to schools, or children’s services as you voted. It goes to a development slush fund that council controls. It might get used to build a parking garage, or to subsidize a developer who just happens to have donated campaign cash to a few council members and/or the mayor.

Example: TIF funds captured from Over-the-Rhine property owners will be used by the city to help subsidize that brand new professional soccer stadium in the West End.

TIFs are used to subsidize stand-alone developments, too. Example: the Queen City Square on Fourth Street. The auditor values the building at more than $234 million. But it pays tax levies to indigent health care or family services on only about $11 million of that value. So instead of paying $284,170 annually for children’s services, it pays just about $7,000. Instead of going to the levies that voters approved, about $8 million is collected annually by the city under a TIF arrangement, used to help subsidize the developers.

This proposed plunder from voter-approved levies was challenged by the Cincinnati Federation of Teachers and a variety of citizens, community and civic groups. But city council plowed forward, extending their TIF piracy to those 15 new districts.

During the debate, much lip service was devoted to the noble purpose of constructing affordable housing. But parking garages and office buildings have gotten the lion’s share of TIF funding in recent years, not affordable housing. Meanwhile, council keeps on approving tax abatements for high priced condos and McMansions.

Here’s an idea: Stop plundering from levies that have earned voters’ support.