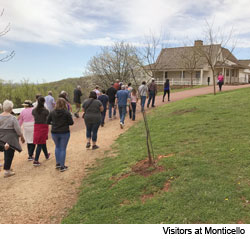 Historians are using public institutions to better analyze the past and todayDan Hurley Racism is America’s original sin. It made hypocrites of the founders who proclaimed, “all men are created equal” while enslaving men and women themselves. It infected the U.S. Constitution by counting any enslaved man or woman as only three fifths of a person, and laid the groundwork for the Supreme Court ruling in the 1857 Dred Scott case that a person of African descent could never be a citizen of the United States.

In 2019, race remains the most divisive fault line in American life. After every racially fueled tragedy, whether in Cincinnati in 2001 or Charlottesville in 2017, religious and civic leaders urge Americans to reach across divides to talk deeply about the way race conditions our experiences and divides us. Those efforts rarely draw true cross-sections of participants or endure very long.

It is against that backdrop that I was pleasantly surprised on a recent trip to Virginia to visit the historic homes of Thomas Jefferson and James Madison.

As a graduate student in American history at the College of William and Mary in the early 1970s, everyone made a trip to Jefferson’s Monticello, primarily to torture the tour guides. At the time, the guides refused to use the word “slave,” insisting that the people who worked in the fields and the house were “servants.” And nothing was more fun than waiting until the tour reached Jefferson’s bedroom and watching the apoplectic reaction to the question, “Did Sally Hemings sleep here every night?”

To the credit of the Thomas Jefferson Foundation, 45 years later the interpretation now experienced by visitors reflects the effective integration of nearly a half-century of scholarship by the public historians responsible for designing the tours and exhibits at the site.

The basic house tour still recognizes the influence of Jefferson as an architect, natural scientist, political theorist and practical politician. But now the tour also focuses on the men and women who actually ran the house on a day-by-day basis, including James Hemings, who had mastered the art of French cookery while living in France with Jefferson, as well as hundreds of others, many of whom are known only by a first name and worked in the fields.

The garden tour credits Jefferson for introducing non-native plants, including delicate striped tulips, imported fruit trees and vegetables. But the landscape of Monticello no longer springs magically from Jefferson’s imagination, but from the sweat of enslaved men and women who actually created and tended the gardens.

The walking tour of Mulberry Row where many enslaved people lived is now a bold and challenging hour-long discussion of American slavery and racism. The public historian who led our tour never blinked or avoided hard realities and worked to get the visitors from seven states and two countries to engage with each other and the issues that were different 250 years ago, but still relevant today.

Most dramatically, the existence of Sally Hemings and her long, complex relationship with Thomas Jefferson is now prominently on display. An exhibit focused on Sally Hemings draws on the memories of their son, Madison Hemings. Guides help visitors grapple with questions like: Can such a relationship only be understood as rape? Was real affection possible between a white owner and an enslaved woman?

The image of James Madison is not as crisp as Jefferson’s for most Americans, but his role as the principal author of the Constitution and of many of the Federalist Papers makes a visit to Montpilier, just 30 miles from Monticello, a must. Here, too, the public historians responsible for the restoration and interpretation of the site have made the story of those enslaved by James and Dolley Madison central to the experience.

Archeological digs have informed the reconstruction of some slave quarters as well as an exhibit in the basement of the main house. The exhibit draws its inspiration and title from Madison’s observation during the Constitutional Convention in 1787 that the “mere distinction of colour made in the most enlightened period of time, a ground of the most oppressive dominion ever exercised by man over man.” The exhibit explores the lives and fate of the 300-plus men and women enslaved by the Madisons.

The public historians at Monticello and Montpilier have two goals. First, they have tried to recognize the humanity of the enslaved, using their names and telling their stories. Second, they want to provide visitors who thought they were coming just to learn about some famous presidents the opportunity to talk with each other about fundamental issues that echo through the centuries. In the process, they have created examples of the sort of tools that we need to create to stimulate meaningful reflection and discussion about the issues we have inherited from the founders.