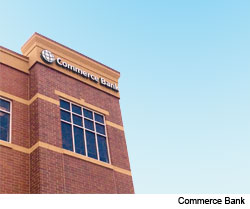 Upon his move to the position, Kemper told the St. Louis Business Journal that the current U.S. economic conditions, benefitting from corporate tax cuts, strong credit and rising interest rates, make the forecast sunny for banks.

Promoted at age 40 in August, the younger Kemper takes over the nation’s 45th largest bank with $24.6 billion in assets and branches throughout the Midwest, including in West Chester.

The large assets and custom approach to its dealings with businesses are the hallmarks of Commerce Bank and what makes the Cincinnati location successful, according to branch Executive Vice President Steve Bloemer.

“The advantage of Commerce Bank is we’re big enough to have a product set, which is competitive, but we still deliver in a custom one-on-one approach to business,” Bloemer says. “The larger banks, and with the consolidation in our industry, there tends to be this one size fits all approach to banking.

“We can have a product set that competes very well with the bigger banks, but we deliver it more like a community bank.”

Having continuity among leadership is a key aspect of the bank’s success, he says.

“We’re not just trying to come into the marketplace and make a big splash. What we’re trying to do is build long-term relationships,” he says. “And I think that’s what John Kemper and the continuity of the Kemper family really allows us to have that long-term view in the marketplace.”

The branch recently hired longtime Cincinnati banker Aric Hassel to the team as senior vice president of corporate banking in Cincinnati. Hassel will use his history working with Cincinnati businesses and homeowners to be a leader in managing relationships with privately owned companies in the area.

After 13 years in the Cincinnati location, Bloemer says his branch has grown into a staple in the marketplace and a secure foundation for area businesses.

“Since I started in 2005 we’ve really grown a nice successful corporate banking business,” he says. “We are a public company but we maintain a long-term view. We’re working to do good business with good people for a long time.”

The addition locally of Hassel and the leadership of Kemper should continue that trend into the future, Bloemer says.