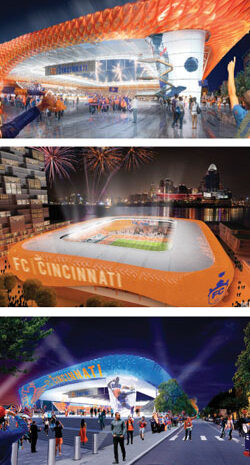 FC Cincinnati’s Major League Soccer bid creates a city divided
Liz Engel
It’s late June in Cincinnati and the weather shows it. It’s hot and sticky inside Nippert Stadium on a Wednesday night, but the 32,000 clad in orange and blue don’t seem to mind. Right now, their team, and the city’s shining star, Futbol Club Cincinnati, is on its sport’s center stage.

The fans stomp and cheer. The pulse of drums—and team-colored smoke—fills the air. In the end, their efforts are rewarded, handsomely. FC, a division II United Soccer League competitor, notches its second victory of the year over a top-tier Major League Soccer team, an upset shootout victory over the Chicago Fire.

In this moment, there’s joy and jubilation. Players pile up in celebration. The crowd roars its approval. But there’s much more movement behind the scenes.

On one side, the win is another feather in the team’s proverbial cap as it pursues a bid for its own place in the MLS. The league is expanding, and Cincinnati is one of 12 cities in the running.

It may be its sole shot. MLS is adding four teams in 2017-2018, but expansion beyond that is unlikely. It’s a “tremendous” opportunity, FC President and General Manager Jeff Berding says. It’s a chance to put Cincinnati on a global map.

But there’s another contingency seemingly fighting against the tide. FC must build a new soccer-specific stadium in order to play with the big dogs. Team ownership, including Carl Lindner III, is fronting $250 million to help seal the deal—$150 million for MLS franchise fees and $100 million more for stadium cost. The remaining $100 million would come from public funds.

That’s too hefty a price tag, says Jeff Capell, an economist and anti-tax activist, who is chairing the recently formed citizens group, No More Stadium Taxes. Residents, at least in Hamilton County, have been burned by bad stadium deals before; the Wall Street Journal, for example, called the Cincinnati Bengals stadium deal the worst in professional sports history. And NMST wants to make sure that history doesn’t repeat.

Capell says no taxpayer funds should be used to fund an FC stadium in either Oakley or West End, two proposed sites. FC’s third option is the Ovation development in Newport, Ky.

“Our region knows as well as anybody the disaster stadium taxes are, and we don’t want to see any more welfare for billionaires,” Capell says.

While debate hasn’t reached streetcar status—the Over-the-Rhine-to-Downtown connector still makes headlines on a regular basis—it’s certainly a wedge issue that could go down to the wire.

FC Cincinnati has never shied away from its MLS aspirations, even from the onset. Only in its sophomore season, the club has shattered attendance records and stolen the spotlight with signature wins over the aforementioned Fire and Columbus Crew.

So in 2016, when MLS formally announced a timeline for adding teams 24-28, FC jumped at the chance. In more recent months, the club selected three possible sites for a new stadium and released a proposed design: a horseshoe shaped, 25,000-seat facility with a color-changing façade. Among its biggest champions is a support group, and a counter to NMST, called Build It Here.

“From a fan experience standpoint, we think it’s going to be tremendous, and I think the design really promotes Cincinnati as a cutting-edge renaissance city,” Berding says. “There’s a brew pub, there’s field level seating, more club seats, which we have a waiting list for. There’s very wide concourses for crowds to navigate more easily. There’s plenty of restrooms and concession stands, so people don’t have to miss the action while they’re waiting in line. There’s no Portalets.”

Whether it’s Oakley, West End or Newport, Berding claims there’s still no clear frontrunner. “People ask me all the time, ‘Which site do you want?’ I say, ‘Whichever one I can make happen,’” he says.

But Newport has emerged as the path of least resistance. While Cincinnati’s fate lies largely with three Hamilton County commissioners, Ovation has one owner, Corporex.

FC already has a memorandum of understanding with Corporex. There’s a TIF district, or tax-increment financing, in place, too, since 2007, a rarity, although sources tell Cincy Magazine it’s not enough to cover the entire $100 million, maybe only up to half, and not all parts of the stadium would qualify under Kentucky law. Officials are still ironing out the details. A stadium would take up less than a third of the 35-acre multi-purpose riverfront site, hard hit by the recession.

“There’s some elements that need to be resolved at the Ovation site, but we’re pretty far there,” Berding says.

Berding says there’s still “ongoing conversations” with elected officials in Ohio, too. The club has tossed around a few financing options, including tapping into the same stadium sales tax that pays for Paul Brown Stadium and Great American Ball Park— when it expires in 2032—as a means to pay off its stadium debt, but “there’s not yet been a singular idea that’s reached consensus.” 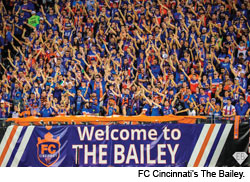 Commissioner Todd Portune did not return an email request for comment, but Hamilton County has nearly $1 billion in wish list projects, and he’s been insistent that Nippert and the University of Cincinnati is still a worthy venue in which to play. FC says issues there are “insurmountable.”

“We’ve at least explored whether or not there is any capacity on the sales tax,” Breding says. “But, to be fair, I think that’s a hard putt. So, we’ve also been looking at other ideas.

“At a certain point here, if a financial plan develops, we’ll ask people, ‘Is this something you can support or not?’ And if the answer is no, then we’ll turn all our attention squarely to Northern Kentucky.”

But the clock is ticking; Berding, realistically, has less than 90 days from now to secure a deal. There’s an MLS owners meeting the first week of December, in which two of four teams will be selected for 2020 play, and a stadium plan needs to be in place before then.

MLS will pick the remaining two teams sometime in 2018 but has given no timetable as to when.

“We feel pretty strongly that we need to be one of the first two, because we’re a frontrunner right now,” Berding says. “We’ve got momentum here in Cincinnati. The longer we go, the more it allows other cities to catch up.”

In the meantime, No More Stadium Taxes is standing guard. Capell is armed with over 30 years of professional studies that prove stadiums are a zero-sum game. “They do not generate more jobs, higher income or economic development,” he says. Specifically in the MLS hunt, voters in St. Louis already voted against a $50 million earmark for a new soccer stadium there. In San Diego, city council deferred a ballot issue that would help fund its stadium plan until 2018.

Only time will tell. If MLS passes on the Queen City, not all is lost, either. Berding says they’ll march on with the club’s already stated goals, which, at some point, could include a professional National Women’s Soccer League team. FC would stay at Nippert, he adds, and “continue to succeed.”

“Listen, we have a tremendous franchise,” Berding says. “We have unbelievable fan support. It’s just been incredible. We’ll continue in the United Soccer League, continue to build the soccer movement and give local players an opportunity to play professionally.

“Having said that, as great as that is right now, we think the opportunity to promote our city globally, in the manner that you can do as an MLS team, is a better opportunity.”