St. Ann Catholic School prepares students for the future with both technology and service.

St. Ann Catholic School in Hamilton may have had its building built in 1909, but there’s nothing old-fashioned about it. The school of 200 students has one of the most forward-looking STEM programs for preschool through eighth grade in the region. It also takes a modern and active approach in transforming its students into virtuous global citizens.

“[We’re] instilling those types of morals or virtues. But then on the flip side [we’re] preparing them academically and technology-wise to be prepared to be a global citizen, to give back, to work in their particular careers. Setting them up both ways is very important,” says Principal Sarah Bitzer.

Bitzer says that technology throughout the school is used to supplement what is being taught—it’s not the focus. However, it is used in ways that prepare the students for life after school.

Students start using technology and learning STEM topics in preschool at St. Ann. Preschoolers have access to what is called a SMART table—an interactive touch-screen table that allows eight students at a time to use it.

Preschool through third grade have access to class sets of iPads. Teachers are able to select apps, including Osmo. Osmo in particular has students perform educational actions outside the iPad to cause things to happen in the screen. “You can do math, you can do coding, you can draw with it,” says Bitzer.

In fourth grade, students are given a Chromebook to use in school. Bitzer says the reason for this switch is to help students learn to be versatile in different types of technology.

At this age, students are given a school email and access to Google Docs. This account stays with them through eighth grade.

“What’s nice about it is that with Google Docs you start building portfolios. Students are able to save their work in a digital way from fourth grade through eighth grade. Once they graduate they can save it all to a flash drive,” says Bitzer. “It’s been a huge asset because our fourth through eighth grade all use Google Docs to do different assignments.”

In sixth grade, students are each given an iPad that they can take home with them.

With all of this technology, teachers are able to download apps that supplement what they are already teaching. The iPads even connect to the school’s Lego robotics track. 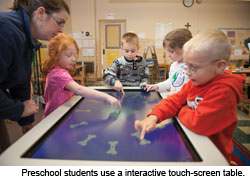 St. Ann’s Lego robotics track and its Goldenrod robotic arm, which they received from iSpace, require students to learn to code so they can make things happen. “In second grade is when we start coding with the students. So by the time they get up to eighth grade they are in the more advanced levels of coding,” says Bitzer.

“Our preschool-through-eighth grade teachers are going to use them. What [the teachers] want to show the students is more cross-curricular,” says Bitzer. While the printer will be used for STEM topics, the hope is that it can also be used to bridge STEM with other subjects, such as printing a hieroglyphic for a social studies class. “[It’s] making academics come alive and building those connections and just keeping the students engaged and interested and wanting to be more critical thinkers,” says Bitzer.

St. Ann is also looking to get its students engaged in becoming moral, virtuous citizens of the world with help from its family-like atmosphere.

The school has daily prayer, mass on Fridays and religion class, but it is also teaching the students about faith, being a good person and the world outside.

One of the initiatives doing this is Pebbles of Faith. When a student shows compassion or is kind and virtuous, the student receives a pebble. The student then places the pebble in their class jar. Once the jar is full, it’s poured into the school jar in front of Bitzer’s office. 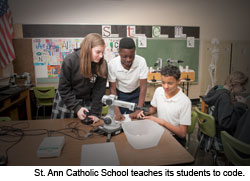 “It takes all the classes to fill it, so you really see the pebbles and all the acts of kindness and ways students were being acknowledged for their positive behavior. I think a lot of the times, students, especially when they come to see me, it’s most of the time for [something] negative. So how can we change so that we’re seeing them for the positive?” says Bitzer.

When the school jar is filled, the entire school receives a treat, such as an ice cream sandwich.

“It’s really enhanced I think our school culture,” says Bitzer. “Our students have really bought into it and it’s done wonders I would say over our culture as a whole.”

St. Ann students are also taught how to serve others throughout the world. The school has 30-to-40 percent diversity and its students reflect both working and upper middle class families, but “[we’re also] going outside of our doors,” says Bitzer. For example, the school put together bags of necessities like toothpaste and shampoo for Glenmary Home Missioners, which assists the poor in Appalachia.

“What was interesting was that in just talking with our students [we learned] that they didn’t realize the need people have in Appalachia,” says Bitzer. “[We’re] building those connections that there’s more going on in the world and how can you help.”

Looking to the Future

Even with these many programs and initiatives, St. Ann is still finding ways to improve. It’s looking at adding a gym and plans to announce an updated five-year vision in the fall.

According to Bitzer, improving the school means looking at ways to keep current families happy while appealing to new ones.

“I think by offering all the programs that we do, we’re really keeping our current families happy. But because we offer so much we’re able to bring in new families and once they are here they feel like they’re a part of the community,” says Bitzer.