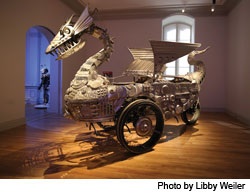 Seriously, when I heard that the museum was soon to host a show called “No Spectators: The Art of Burning Man,” it was hard to know what to make of it.

On the one hand, you have Burning Man, that colossal pop-up metropolis that reappears every year on Nevada’s Black Rock Desert. Billed as an “experiment in temporary community,” it has a reputation as a gathering of more than 70,000 pleasure-seeking, anti-consumer sybarites. Remember, when it comes to “the man,” this is a festival dedicated to burning him.

On the other side of this partnership you have the Cincinnati Art Museum. It couldn’t be more different. We use words like “venerated” and “esteemed” to describe it. It’s an institution that was built with old money. Sitting on its Olympus-style setting in Eden Park, it houses a vast permanent collection, much of it gifted by families who personify “the man.” The same “man” that Burning Man burns.

How could they possibly find any common ground?

Through art, it turns out.

For all its radical trimmings, Burning Man is organized by a well-oiled nonprofit corporation. It engages in very little traditional fundraising, though it is rumored that some Silicon Valley money has crept into the funding mix in recent years.

But those 70,000 people who show up to party and commune together? It turns out that they pay hefty entry fees. So while Burning Man may have its anarchic leanings, it manages to make a fair amount of money every year. And with that money, it offers economic support to an array of programs and individuals working in everything from education and social enterprise to the arts.

If you should ever attend Burning Man, you’ll see the influence of the arts—particularly the visual arts—immediately. It is a manifestation of the creative juices that Burning Man hopes to unleash in everyone who visits. Visual artworks are central to creating Burning Man’s otherworldly desert atmosphere.

Participants create the most remarkable “things” out there, from eye-popping steampunk-inspired vehicles to castle-like structures, from an enormous, multi-colored jellyfish to a towering Afro pick rising out of the desert floor.

Small wonder that some adventurous bricks-and-mortar arts institution might want to share that art with its patrons. Most of today’s major art museums can no longer afford to be our grandmothers’ museums. For one thing, many are public institutions and are expected to serve a broader swath of the public than they did 50 years ago. Also, they’re looking to appeal to younger generations of arts patrons. And by “younger,” I mean everyone from Baby Boomers on down.

“Visual arts” are no longer limited to dark and moody portraits by Dutch Masters. Or Impressionistic paintings awash in swirls of color.

Today, art can be anything from a dizzying light show—think “Blink”—to industrial design. It can be a hillside adorned with rocks arranged in geometric shapes. Or a fire-breathing vehicle with a dragonhead.

So as unlikely as it may be to find a bit of Burning Man in Eden Park, it really shouldn’t come as a shock. It’s a reflection of the many different directions that art is evolving into.

In March of last year, the Renwick Gallery, now a part of the Smithsonian American Art Museum, introduced “No Spectators.” The title, incidentally, is a reference to a deeply held Burning Man belief that people should not be bystanders. Life is not a spectator sport. Burning Man participants and, by extension, the rest of us should be involved in the world around us in every way we can. If you read through Burning Man’s 10 Principles, one deals with radical participation, another with radical inclusivity.

With the Renwick having taken that first big step, it was easy for other museums to start to fall in line. The exhibition closed at the Renwick in late January and opens here on April 26. After Cincinnati, it will move on to the Oakland Museum of California (Oct.12, 2019–Feb. 16, 2020).

“It is one of the most influential movements in contemporary American art and culture,” says CAM director Cameron Kitchin in a prepared statement. “The visual culture created in conjunction with the Burning Man gathering each year is a democratic and inclusive model of artistic expression. Working with the thinkers and artists who create the culture challenges the very notion of an art museum.”

So what, exactly, will you see?

There are hundreds of objects, large and small. There’s Duane Flatmo’s “Tin Pan Dragon,” looking like a cross between a Viking ship and a creature out of a Harry Potter nightmare. There is “Shrumen Lumen,” a room filled with giant origami mushrooms with a constantly moving array of lights playing over them. And Marco Cochrane’s “Truth Is Beauty,” a shimmering 19-foot tall sculpture of singer/dancer Deja Solis. The original sculpture, created at Burning Man, was three times taller.

There are dozens of other Burning Man-related activities, from lectures and occasional tours given by “burners”—people who have attended Burning Man—to an enormous “temple” that is already being constructed by volunteers on the grassy hillside on the west side of the museum complex. Organizers hope to involve it in a Burning Man-type burn. But finding the right place to torch a sizeable structure is, as you might guess, proving complicated.

In keeping with Burning Man’s philosophy that art is for everyone, admission to this special exhibition is free.

Stay tuned. To keep yourself up to date on the museum’s Burning Man activities, visit cincinnatiartmuseum.org/burningman.