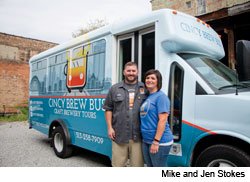 A local brewery tour company has found success thanks to the growth of the beer communityMike Boyer A love of craft beer and Cincinnati history put Mike Stokes on the road in 2013.

Stokes spent more than a decade in banking but wanted to tap into the emerging craft brewing phenomenon and thought leading entertaining brewery tours might be the way to go.

“In every good beer town there’s some sort of brewery tour. I looked around Cincinnati and no one was doing it,” says Stokes, who launched the Cincy Brew Bus in late 2013 with his wife, Jen.

What started as an idea for a weekend business turned more serious when his regular banking job was slated for elimination shortly after he got his business license in the fall of 2013. He landed another banking job, but the success of Cincy Brew Bus almost from the beginning turned it into his full-time career.

“We started getting requests from people on our tours to do their own private tours,” he says.

Today Cincy Brew Bus has four of its own buses and uses other local transportation companies for its mix of public and private tours.

“We run anywhere from 10 to 12 tours a week and have about 12 tour guides including myself,” he says.

In 2015, the company branched out offering tours to a half a dozen area wineries and local distillery and bourbon tasting tours as well.

“That’s been really popular lately,” he says. “We try to work around what people want and make it special for their groups.”

Stokes says there are more than 40 area craft breweries and his tours regularly visit most of them. There are so many craft breweries, he’s begun offering tours focused on certain areas. For example, there’s a Butler County Brew Bus and tours are offered of three or four craft brewers located off Hamilton Avenue in Hamilton County.

“We’ve got people who’ve taken the tours seven or eight times over the last four years and not visited the same brewery twice,” he says. “We’ve got some loyal customers.”

Cincy Brew Bus offers two basic craft beer tours: A three-stop tour running between three and half and four hours and a four-stop tour running four and a half to five hours. They cost an average of $60 per person.

At each craft beer stop, patrons can get a behind the scenes look at what makes each brewery special and the opportunity to sample three different beers, about 16 ounces of beer at each brewery. In between stops they can nosh on complimentary Servatii soft pretzels while the guides share stories and offer trivia contests about Cincinnati’s beer history. “We want to make it an entertaining and engaging experience,” he says.

Stokes is expanding the business. It now offers a Louisville craft brewery tour—“We call it the Louisville Brew Bus,”—as well as one along the Kentucky Bourbon Trail and a couple annual trips to Keeneland during spring and fall racing.

For more information on schedules and tours go to cincybrewbus.com.