Five ways the Republican Party lost the county as Trump won the rest of Ohio.

At 1 a.m. on Feb. 1, 1998, Cincinnati City Council was filibustering deep into the night, mired in a mud hole of blabber, unable to meet a midnight deadline for a new stadium to keep the Bengals. So Councilman Todd Portune climbed into the balcony in the cavernous marbled council chambers at City Hall and turned the wall clock back to 11 p.m.

They finally voted. The Bengals stayed. And the rest became City Hall history, tucked away in some government-issue gray file cabinet along with door-slamming shouting matches, window-breaking protests, streetcar battles and drawer after drawer of broken promises and busted budgets.

But history repeats itself. Now Portune has control of the Hamilton County Commission with a two-Democrat majority, and local Republicans are feeling a sense of déjà vu. They see Portune turning back the clock again.

Lonely Republican Commissioner Chris Monzel was frozen out of budget planning as the Democrats tore up a Republican budget and juiced spending by $6 million. When Monzel pointed out the gap between spending and income, Portune and new Commissioner Denise Driehaus “adjusted the clock”—by boosting tax revenue predictions to cover more public transportation, heroin treatment, county raises and programs such as an Office of Inclusion ($135,000) and Office of Innovation and Creativity ($250,000).

“We have a vision that we have articulated and that we are supporting that is going to guarantee that not only are we a good county but that we are on the path to reemerging as a great county,” Portune said in his state of the county address.

Sales-tax growth is the key: The county’s 2016 budget reported a six-year average of 4.3 percent, but Monzel warned that it had flattened to less than 1 percent. 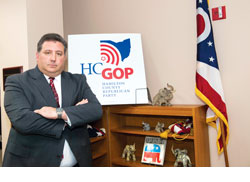 Monzel blasted the Portune-Driehaus budget on the Brian Thomas radio show: “We can’t print money. We have to have a balanced budget.” He warned that banking on 4 percent revenue growth was unrealistic and that new “feel-good programs” for “inclusion,” and “creativity” would break the budget.

It sounded a lot like Monzel and other Republicans when they tried to put the brakes on City Hall spending, before they became an endangered species on council. Republicans are now outnumbered two-to-one at the county and have just two of nine seats on City Council.

For decades, Hamilton County government was the Republican “designated driver” in the Cincinnati region, while City Hall got knee-walking drunk on spending.

No more. The city and county are now firmly in Democrat control.

Nobody knows this better than Alex Triantafilou (Tree-aunt-a-FEE-loo), the chairman of the Hamilton County Republican Party since 2008.

Hamilton County’s GOP was the first in Ohio to endorse Donald Trump while more timid counties held back, choosing to ride Gov. John Kasich’s presidential campaign into a crater. President Trump showed his gratitude by holding his first thank-you rally in Cincinnati.

But the national Trump wave that washed over Ohio did not lift many boats in Hamilton County. “There are several reasons,” Triantafilou says.

True. Hamilton County voted for Hillary Clinton in 2016, after voting for Barack Obama twice. Until 2012, it was reliably Republican. Now it has become reliably Democrat in presidential elections, when turnout peaks. 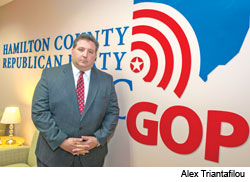 That is explained by demographics. Conservatives have “voted with their feet” and moved out to surrounding counties.

“I know this drives liberals crazy,” Triantafilou says, “but the most livable communities in our region are Republican-run, with safe streets and better schools. If you want that, you move out of Cincinnati. Look at the numbers for Mason and Lakota schools. A lot of people are fleeing to cleaner, safer neighborhoods with better schools.”

Since the last time the county went for a Republican president, George W. Bush in 2004, the county’s 800,000 population has lost as many as 40,000 residents. The next-door neighbor to the north, Butler County, is now the unofficial capital of Republican power in Ohio. Which leads to: “The Trump campaign knew the urban centers would not be where they would go to mine votes,” Triantafilou says.

The media has lately discovered—Eureka!—what everyone in “flyover country” already knew: America is divided urban vs. non-urban. A map of Ohio, for example, is an ocean of red Trump voters. He won 80 of 88 counties with more than 70 percent of the vote in 30 counties. The isolated islands of blue Hillary Clinton counties are in Cleveland, Columbus, Cincinnati, Akron, Toledo and Athens, home of Ohio University, the Berkeley of the Heartland.

Another reason Republicans lost Hamilton County is one that Triantafilou would like the GOP to learn: “They ran a candidate who had crossover appeal, a conservative Democrat.”

Denise Driehaus, whose name is well known beyond her roots in the conservative West Side, served four terms in the Ohio House before running for county commissioner. Her brother Steve Driehaus served in the state House and briefly in Congress, marketing the Driehaus brand.

“We need candidates like that, who can pick up crossover votes from Democrats,” Triantafilou says. “We need to run the most conservative candidate who is electable.”

Conservative—but electable. That’s a test credited to William F. Buckley Jr. to weed out ideological purists who go down in flames.

One more reason Triantafilou did not mention: Republicans got lost in space.

Ohio party officials were so convinced that yet another Bush (Jeb!) was their savior, they were choosing carpet for the Oval Office. But they were untethered from voters, drifting like the lost astronauts in Gravity.

For Gov. Kasich and Sen. Rob Portman, the Trump victory was a hard landing. Kasich pouted and ditched the Republican Convention in his own state. He has seethed for months about Hamilton County’s support for Trump. Portman avoided Trump like a contagious anti-establishment flu virus. As Trump would tweet: Sad!

Given historic control of the White House, House and Senate, Republicans have been paralyzed like a car-chasing dog that finally caught one. That’s not the change voters demanded in the last election. Another backlash could be brewing.

Triantafilou admits his bench is thin. Without the stage lights of City Hall, good candidates in the ‘burbs struggle to make a name countywide. He has no superpowers to anoint candidates. “There are so many myths about what the party can do. These days [donor] money goes to the candidates, not to the party. The best I can do is offer them a call list and some advice, not a big check.”

Unless the former judge lands a lifetime appointment on the federal bench, he would like to keep the job he enjoys as party chairman. Triantafilou is realistic but optimistic. The wind is against him, but he sees a chance to take back the county if Democrats turn back the clock on spending.

“Denise and Todd will have to raise taxes for sure,” he says. “If we can learn our lessons and run the right candidate, we will have an opportunity.”