Business owners are seeing increased crime in local parks. Can anything be done?
By Liz Engel

It always seems to start in the springtime.

After a long winter, when the days are gray and the winds are biting cold, activity at downtown’s Piatt Park seems renewed. People come. Trees bud and flowers bloom. Except, increasingly, these days, the activity itself has a particularly unsavory element, surrounding business leaders say.

A European-like oasis, Piatt is one of the oldest parks in Cincinnati and is considered unique. Its two-block stretch includes fountains, benches and shade in a span that runs from Vine Street to Elm.

But the space has given way. Drinking, drug use, even overdoses are commonplace. And tenants along Garfield Place have a front row seat.

Piatt is also unique in that it’s essentially at their doorstep.

“Frankly, it’s a big problem. The park has really gone downhill,” says John Gabriel of Vulcan Property Management, located at 30 Garfield Place. “I hear a lot of people saying, ‘What happened?’ They don’t go out there for lunch anymore. You don’t hear the music in the park like we used to. And we call the cops constantly.”

Dan McMullen, property manager for 19 Garfield Place, which houses LPK, a brand design agency, among other tenants, says he sees it, too. It’s not a new issue, he adds, but one you can’t miss.

“I think it’s always been an ongoing issue that’s gotten worse, and it comes around in the springtime,” McMullen says. “People say they’ve seen needles. When you see someone actually revived from Narcan in the park, it’s kind of scary. And we just put a new tenant in recently. If it’s a big enough issue and people don’t feel safe, it can definitely impact your business.”

Gabriel thinks a decrease in funding may be to blame. And with more square footage in the downtown footprint—the addition of Smale Park, for one—resources are presumably spread thin.

Both Jackie Binford with Cincinnati Parks and Lt. Steve Saunders with Cincinnati Police say there used to be a specific unit within the police department dedicated to park patrol. But because of budget cuts, park rounds are now a district responsibility—for example, if a park is located in District 3, then it’s up to officers in District 3 to patrol it.

In all, there are 75 neighborhood, five regional and seven riverfront parks in the Cincinnati jurisdiction. In all, Parks manages more than 10 percent of city land.

“Unfortunately, that relationship is no longer there,” Binford says, “but I think it’s something that’s needed. They do provide us with a liaison, if you would, who comes to our monthly meetings, but we just don’t have that same connection. It’s something the previous director (Willie Carden) had asked for, and was unfortunately unable to do. We do have a new park director (Wade Walcutt) and maybe that’s something he can take up again. Because it was a great partnership that allowed us to keep an eye on things out there.”

Cincinnati parks are well renowned—considered in some surveys as among the best systems in the nation. But they are not isolated from criminal activity. In 2014, a man was shot and killed near Piatt Park. More recently, in early July, Cincinnati Police arrested a 25-year-old male for robbing five hikers at Ault Park over a 10-day stretch. 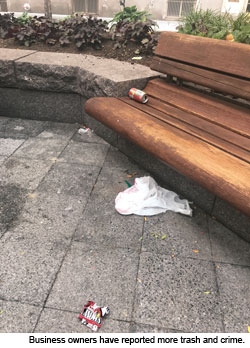 Saunders said he’s unaware of any changes to how parks are patrolled—although neither he nor Binford seemed aware of any specific complaints regarding Piatt.

“It is one of the parks that sees a lot of homeless,” Binford adds. “Similar to Washington Park, where we know we have to go in and put some extra clean on, because it is heavily used.”

There are numerous surveillance cameras in place—at Piatt and other areas as well. They are not monitored 24/7.

“If we were to make any changes to our coverage of the park areas,” Saunders says, “it would be based on the evaluation of data and other anecdotal information that would demonstrate a need for that response. Park areas are unique spaces and present some unique challenges as well. Overall, our focus is to provide visibility and preventative patrols that provide a safe environment for people to enjoy these spaces for the purposes they are designed for.”

As far as officials dedicated to such patrol, parks fall under the police department’s special operations program, which has seen slight cuts over the years. From 2014 to 2017, funding decreased 5 percent.

But for fiscal year 2018, special operations, which also includes units for public safety and traffic enforcement, is projected to receive $11.1 million—a 35 percent increase from nearly $8.2 million in 2017. It appears the increase, in part, comes as some sworn officers are transferred from other functions. Saunders deferred budget questions to his fiscal department. They did not respond to requests by press time.

Gabriel hopes any changes in the police budget will help reverse the trend.

“They weren’t here all the time before,” Gabriel says of the formerly dedicated unit, “but they did help.” Now, “the response times are worse than they used to be. I think [the cops] are overworked, with the number of drug-related crimes downtown, but I would like to see some solidly dedicated policing done to restore this park to the condition it was before.”

If things continue to progress in the wrong direction, McMullen isn’t sure the impact it will have. Or even what the solution may be. More money can help, sure, but Piatt Park is far from an isolated case.

“I think it’s just how society is today,” McMullen says. “I can’t blame the police right now. Their hands are full, and we’re not the only city with [a drug] issue. You just have to scratch your head and think, ‘How do we figure this all out?’ I don’t know what to do.”