Two piles of stones represent the ongoing struggle for freedom.

This pile of stones initiated by Nelson Mandela and other former political prisoners stands today in the lime quarry on Robben Island as a symbol of their willingness to lay down their anger about their former oppressors.

As I walked for the first time into the final gallery of “Mandela: Journey to Ubuntu,” the new exhibit created by the National Underground Railroad Freedom Center, I was thrown back. On the wall a photograph of a simple pile of stones caught me off guard and struck a deep, but not immediately identifiable, chord.

Nelson Mandela spent 27 years at hard labor in a series of South African prisons, including on Robben Island in the bay off Cape Town. Years after his release, in the midst of his term as president of the post-apartheid South Africa, Mandela and almost 1,000 former political prisoners returned for a visit to Robben Island.

The limestone quarry on the island was infamous. There, prisoners labored in the summer heat and the winter cold. The glare of the sun off the walls of white lime damaged the prisoners’ eyesight while fine dust particles degraded their lungs. Nelson Mandela suffered the rest of his life with the consequences of working in the quarry.

As they walked through the quarry and reminisced, Mandela picked up a chisel and hammer and cut out a small rock. He laid down his stone and encouraged others to follow his example. Although no one recorded his exact words at that moment, the consensus of those present was that he said something like, “Let us forget the past, let us concern ourselves with the present and the future, but to say that the atrocities of the past will never be allowed to happen again.” These simple gestures and concise words transformed a haphazard pile of stones into a memorial infused with meaning and hope.

Deeper into the gallery is a pile of real stones also from the lime quarry on Robben Island accompanied by a simple but powerful video. By the time I reached that point, I realized why I was so unnerved.

Seventeen years earlier I had stumbled upon the story of another pile of stones right here in Cincinnati that also took on power and meaning for the struggling free black population of Cincinnati in the 1840s and ‘50s. 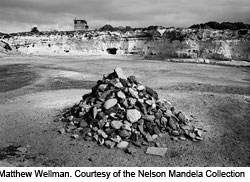 Cornelius Burnett and his family lived on Fifth Street between Walnut and Vine between the late 1830s and the 1850s. Burnett was infamous for his open willingness to assist runaways and his defiant abolitionist attitudes. The Cincinnati Gazette described him as “a mischievous and swaggering Englishman oftener in trouble of this kind than half the other abolitionists of this city together.”

In June 1841 Robert Black escaped enslavement in Kentucky, crossed the Ohio River and sought sanctuary in Burnett’s home. When the constable and Black’s owner arrived, Burnett and his three sons tried to physically block their path and scuffled with the marshals. On two different occasions that day mobs tried to stone the Burnett house and had to be dispersed by police.

Black was captured and returned to slavery in Kentucky. The police arrested Burnett and his sons, charging them with assault. The Burnett men refused to post a $3,000 bail, choosing jail instead.

Fourteen years later James Presley Ball, an accomplished local African American daguerreotypist, wrote a pamphlet to accompany his Splendid Mammoth Pictorial Tour of the United States. In the booklet Ball reported in the years after 1841 Burnett’s “premises were time and again sacked by gangs of men and boys, urged on by slave hunters.” Burnett apparently viewed the stones these mobs threw at his house and through his windows as emblems of pride, and “was in the habit of gathering the stones that were hurled against his house, and in time they grew to quite a heap.”

Ball also reported that the local African American community hoped someday to transform that pile of “hostile missiles” into a monument to Burnett and other abolitionists who risked their own comfort and freedom.

The sentiment behind these two piles of stones is different. The Robben Island stones, which remain on the quarry floor, represent a determination to lay down years of accumulated hostilities and anger. Whether by initiating the assembling of a simple pile of stones or by creating the profound Truth and Reconciliation Commission, Mandela accepted that we can only find healing by recognizing the connectedness of all people, including oppressors and oppressed, what South Africans call “Ubuntu.”

The Cincinnati stones, which were never transformed into sculpture and are long lost, represented thankfulness for the moral fortitude and bravery of all those willing to risk their own freedom to help others escape oppression.

No matter the differences, these two humble piles of stones close the distance between the ongoing human struggle for freedom across geography and time.