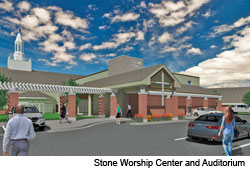 “Usually facilities attract and culture keeps. Unless we are competitive, unless we have facilities that are attractive, that are modern, in some cases cutting edge, then it will impair our ability to attract prospects,” he says.

The organization has moved further in this direction thanks to the help of three new projects.

The first is the recently completed Guardian Center for Memory Support at The Christian Village at Mt. Healthy. The new center is a secured floor dedicated to assisted living memory support.

“We provided specialized memory care at Mt. Healthy for years but it’s a 50-plus year facility,” says Monroe, “We took a look our facility and we took a look at what we had to offer and felt that we needed to make an investment to modernize that area.”

Christian Village Communities invested $1.7 million in updating the floor. The center is now a modern space with private baths, full showers in each room and common spaces like a living room, dining room and kitchen, enabling the staff to provide the same quality of care in a more modern space.

Christian Village Communities is also updating residences at The Christian Village at Mason. The organization is starting to convert its independent living homes, which were originally built in the ‘80s, into larger and more modern manor homes.

“These are homes that are close to 2,600 or 3,000 square feet with two-car garages, two full baths, half bath, very spacious open living areas and modern finishes,” says Monroe.

The organization is in the process of finishing its second home and has identified a third, but Monroe says they have already seen increased interest in the Mason community thanks to the manor home concept.

The last project is Christian Village Communities’ biggest. The organization is in the midst of a $2.85 million campaign to build a new auditorium and chapel at the Mason community. Called the Stone Worship Center and Auditorium, the center will increase the community’s meeting space capacity from 99 to 400.

“We’re very limited for space when we want to get all the residents together for activities. It’s not uncommon for us to have to have concerts on several consecutive nights in order to get everyone in that wants to attend,” says Monroe.

Service attendance is also very high, with the community recently adding a third service on Sundays to meet the demand of its residents.

“We felt that if we had a larger auditorium, we could reach so many more people and it would be wonderful for us to continue to grow that chapel service,” says Monroe.

With these three projects, Monroe says the organization will be able to retain its culture while becoming more attractive to prospective residents.

“I believe that these investments are necessary in order to keep us attractive to prospects and to help us grow and continue to be successful in the future,” he says.